This is a new one on me; I’d never heard of Baby Audio until a request for a review, together with a link and a licence key, showed up in my inbox. A quick search on Baby Audio threw up a number of interesting plugins, specifically one called Super VHS, which is a fairly popular and incredibly low priced, lo-fi ‘80s style tape emulation.

So Baby Audio are no stranger to this style of plugin. However, there are so many tape emulators, saturation and modulation recreations – some of which I already have – that it might seem strange to bring yet another similar plugin to the market. Well, that’s exactly what I thought until I started using it!

Taip, or T.AI.P as the GUI suggests, is an AI-powered tape plugin. Instead of using algorithms to emulate what happens in the analogue circuitry of a tape machine, this plugin uses an AI algorithm which has spent thousands of hours detecting the difference between the dry and wet audio examples.

This isn’t utilising the AI algorithm while listening to the audio you feed it and making decisions in real-time; the learning has already been done for you and has been broken down into a number of flexible parameters. The wet signal is adjusted with the aid of a control panel sporting a very useful and musical set of controls, which give you everything from tape hiss to a badly biased and calibrated tape channel.

I’d like to say I can tell which tape machine was used, but my memory isn’t that good these days, so if I was to hazard a guess I’d plumb for the two-track Studer A67 or Revox B77 which shared some of its circuitry. Either way, I doubt very much if anyone had the gaul to deliberately push the original machines to produce some of the range of sounds that this plugin is capable of. Seems these days rules are there to be broken and the musical landscape is far richer for it!

The interface is laid out like a tape machine in a very logical and obvious way. The left reel is the drive control and the right reel the output level. Driving the input level is what creates the analogue style tape distortion; the more you drive it the more it distorts and breaks up. One point to note is the signal; although it can sound louder, the harder it’s driven actually seems to stay fixed to the level set by the right reel - output level control.

Between the reels is a Drive Auto-Gain On/Off switch and below that a Mix fader which blends original with processed signals. On the left side is a very stylish slim level meter showing input signal level and likewise on the right, the output signal level. Above the TAIP logo in the middle is a handy bypass button simply named Baby Audio. which allows for a quick A/B of processed and dry signals.

This is where it starts to get interesting, and with care-free manipulation of the bottom bank of controls, some really freakish sounds can be achieved - probably well beyond what you might think possible from other, mere emulation tools.

On the bottom left of the control panel are three horizontal faders: Noise, Wear and Glue. Noise adds a healthy adjustable amount of background hiss to your audio signal but closes off a bit like it’s being gated about a second after the audio signal finishes. If you wanted it to run for an entire track you would need to place it on a track with constant audio on it from start to finish. The second fader marked Wear produces a really lovely wow and flutter style of modulation and degradation. Reminded me a little of a few years back when I made an attempt to go back through a collection of cassettes to retrieve some of my melody ideas; 30-40 years on they hadn’t fared so well!

Below that is the Glue fader. This seems to change its characteristics depending on what kind of source material the plugin is placed. For example, on percussive material it seems to behave as though with a slower attack giving a more aggressive sound with a longer top end decay. Either way, it glues the drive and source together in a very musical way, giving a lovely range of subtle to upfront compression. 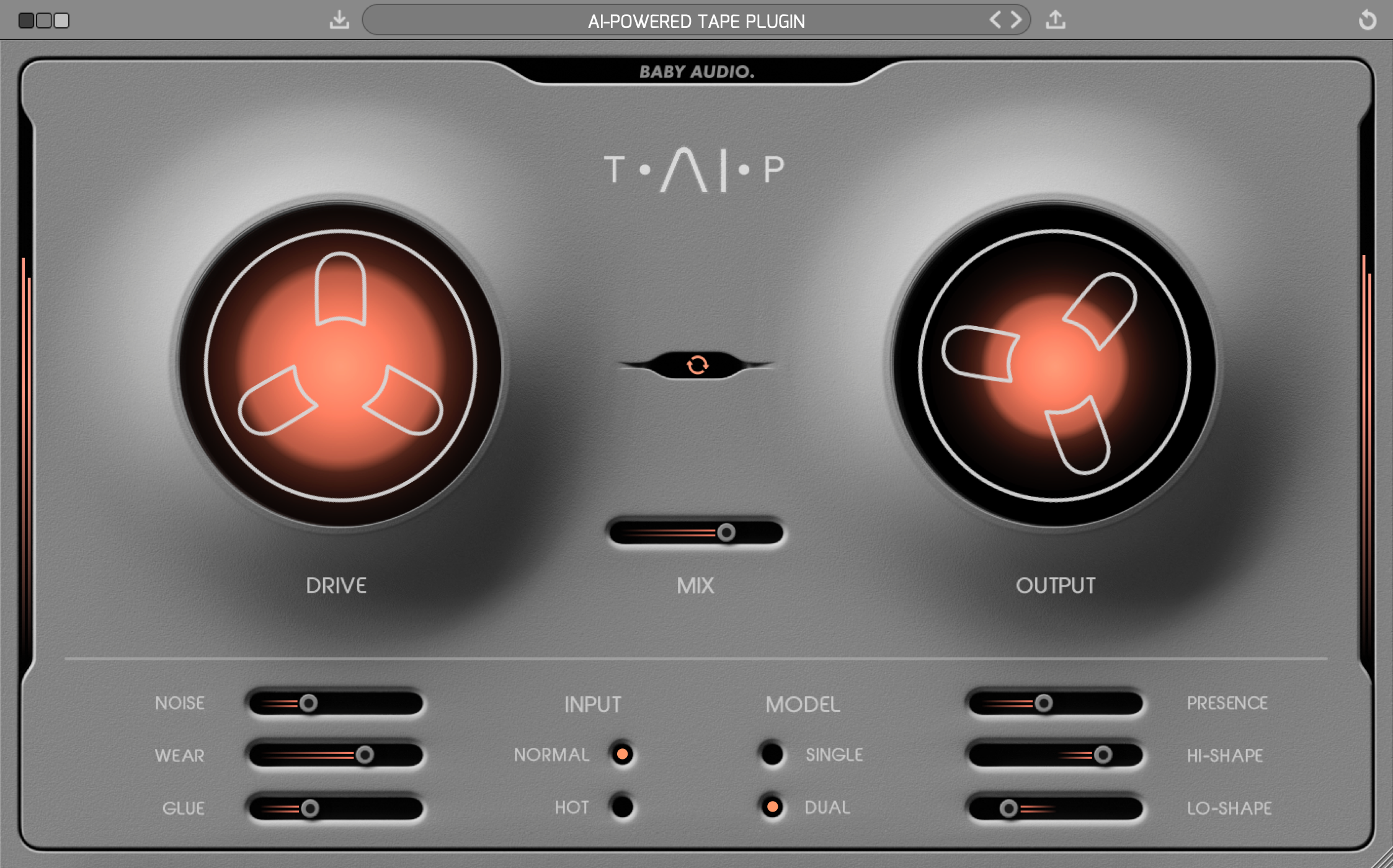 The flexibility of TAIP by Baby Audio is immense.

In the middle are two option switches. Input switches between Normal and Hot, and Model switches between Single and Dual. Hot, as you might expect, gives a subtle boost to the nature of the distortion and seems almost superfluous to the power of the Drive control, however after some time playing with it, it’s possible that Normal and Hot are two slightly different flavours of saturation which become far more obvious as you increase the Drive.

The Model option of Single or Dual was slightly harder to work out as the differences here are far more subtle. But in headphones the sound in Dual Model is bigger and bolder, which leads me to conclude that Single is going through one tape machine, while dual is sending signal through two tape machines.

On the right hand side are three more horizontal sliders, which start with the presence control. As is usual, the presence gently lifts the high-mid and high frequencies and brightens up the signal. Whereas all the faders so far have operated from left-to-right to increase values, the last two start in the centre and provide plus or minus values. The controls are described as Hi-Shape and Low-Shape and I think they are a modern twist on the old bias and EQ gain settings that were used to calibrate tape machines and make adjustments for the different formulas of professional audio tape that are available.

Although it’s many years ago now, I remember regularly listening to and stripping tape with test tones which were used as a means of setting the correct bias for the tape so it could easily be moved from studio to studio. While these controls don’t directly relate to any particular known analogue control, what they produce is the sound of a correctly to a badly set up tape recorder. If you move to the right they enhance the frequency range and to the left they seem to break down and remove those frequencies.

I had a lot of fun making the video and reviewing this plugin. I just kept smiling while trying to make things sound as bad as I could – things just kept sounding good however bad they became. The flexibility of TAIP from Baby Audio is immense and can take you down paths you hadn’t thought of going down before with your creativity. It was exceptionally good at putting the human touch back into programmed music. It brought flat and soulless audio to life and put the dynamic back in drab. This is a plugin everyone will love.

It’s actually easier these days for musicians and producers to create high quality in the box music with modern technology. Whether that music is good or not is very much in the hands of the consumer. The thing is, good music is not always the best programmed or the technically best played or even the cleanest. Sometimes you just need to dirty it up a bit to make it sound real and alive again. And this is another very good tool to help in the pursuit of musicality. Whether it’s bit crushers, valve emulations, distortion and saturation enhancers or analogue summing amplifiers, there are no shortages.

What sets TAIP from Baby Audio apart is its musicality, ease of use and its price. I expected that a high quality plugin of this nature would set me back $150 plus, but the retail price is expected to be a very modest $69. I’m so impressed I’ll be checking out some of the other plugins from Baby Audio.

You can read our guide to the best plugin bundles on the market here. You can also read our review of BABY Audio's free Magic Dice plugin here.