New York City-based guitar manufacturer D’Angelico Guitars has come a long way since its humble beginnings in 1930s Manhattan. We recently checked in with the company’s EVP of product development, Ryan Kershaw, to find out more about its latest product line, rapid growth over the last few years, and what it has been doing to keep musicians inspired.

Despite an extremely challenging few months across the board for most, New York City has started on its long road to recovery.

Thankfully, playing musical instruments is one of the many ways that people have been trying to stay sane during these strange and stressful times, a factor that D’Angelico Guitars has grabbed by the horns in an endeavour to maintain its business.

It’s fair to say that understanding the company’s rich and storied history provides vital context as to how it operates today.

D’Angelico was started in the Lower East Side of NYC in 1932 by one man, the company’s namesake John D’Angelico. He built handmade archtop guitars throughout the jazz age right up until his passing in 1964. Often working alone, he built just over 1,100 instruments in total, including many coveted models considered to be some of the greatest of all time, crafted for the who’s who of the day.

Archtop guitars, with their cannon-like quality and big, robust bodies, were originally acoustic instruments designed to be heard over large swing or jazz bands, and it wasn’t until a number of years later when they became electrified.

The real roots of the brand were firmly ingrained within D’Angelico’s legendary luthiery skills, and after 1964 it changed hands a number of times, for a little while being sustained by D’Angelico’s most widely-known apprentice Jimmy D’Aquisto. It wasn’t a worldwide ubiquitous brand for quite some time however.

At the turn of the new millennium the D’Angelico name was acquired, and in 2011 saw a full relaunch, followed by expeditious growth and a complete product line reinvigoration.

“John’s instruments have this undeniable magic to them,” says Ryan Kershaw, D’Angelico Guitars’ executive vice president of product development. “Back when John was gaining popularity a few years into his career, he was offered positions by some of the bigger brands during those days, and actually denied those opportunities. He was a very unique, interesting kind of character and somebody whose mastery we are super fortunate to have at the roots of what we do.”

After its big comeback in 2011, the company decided to relaunch a number of John D’Angelico originals as resissues, particularly the EXL-1 single cutaway archtop, which preceded a move into semi-hollows.

“Those models have changed quite a bit spec-wise over the years, but they were the foundation of our relaunch and are still very much some of our most popular instruments,” Kershaw adds. “They have certainly stood the test of time.” 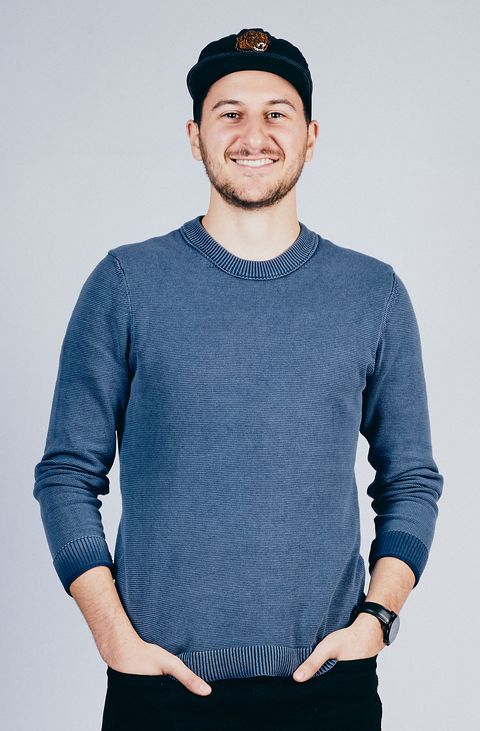 THE DOORS OPENED ON THE FOURTH FLOOR, I SAW THE VELVET CURTAINS, THE WOODEN WALLS LINED WITH GUITARS AND THOUGHT ‘GOOD LORD, THIS IS KIND OF A WILD SPOT!’” Ryan Kershaw

The years that followed saw the company establish a number of successful distribution partnerships in the US and international markets. People seemed to have been waiting for the D’Angelico name to pop back up, with many responding well to the quality of its new instruments and overall presence at the NAMM Show.

By the time that Kershaw joined the company six years ago, it was ready to launch a significant amount of new products, including its Series lineup - a range that opened the door for D’Angelico to become an even bigger player in the industry.

The first in the lineup is the Premier Series, which Kershaw says was launched in an effort to test the market and see whether people who were buying perhaps their second, third or fourth guitar were interested in the D’Angelico name, and in a high quality semi-hollow at a comfortable price point.

“For a lot of people, D’Angelico was always like an unattainable Cadillac, and they would only ever acquire one if they reached the absolute pinnacle of whatever it is they do,” remarks Kershaw. “We knew that we had to focus on making high quality instruments that were still accessible and affordable to players of all talents and ages, and soon learned that there was quite a bit of interest at that level.”

Meanwhile, the Excel Series, one of D’Angelico’s most long standing instruments, is heavily inspired by the vintage nature of the brand. Coming in both semi-hollow and acoustic variants just like the Premier Series, the Excel Series stays true to the company’s art deco New York roots with its traditional colourways and style.

“While their price point is higher, we realised that the Excel series is a really great place to have a lot of name brand incorporation on really high quality parts, and so we’ve got Seymour Duncan Custom Shop stuff, all Grover hardware, really nice tonewoods, rosewood and ebony on the finger boards, etc. - the list goes on,” explains Kershaw. “It’s more of a series for players who are perhaps touring musicians, or recording artists, or those seriously collecting instruments.”

The Deluxe Series on the other hand “originally came from us wanting to do some limited edition instruments, some more daring colours, and some more out-of-the-box stuff that maybe folks weren’t expecting from our line, which made for quite a splash,” he adds.

“I think we got a lot of eyeballs on us because it was clear that we were simultaneously looking in two directions; looking back at our brand history and really trying to do our name justice with reissues and with traditional products in the guitar market, but also looking forward in trying to grow and forge a new path for the brand.” 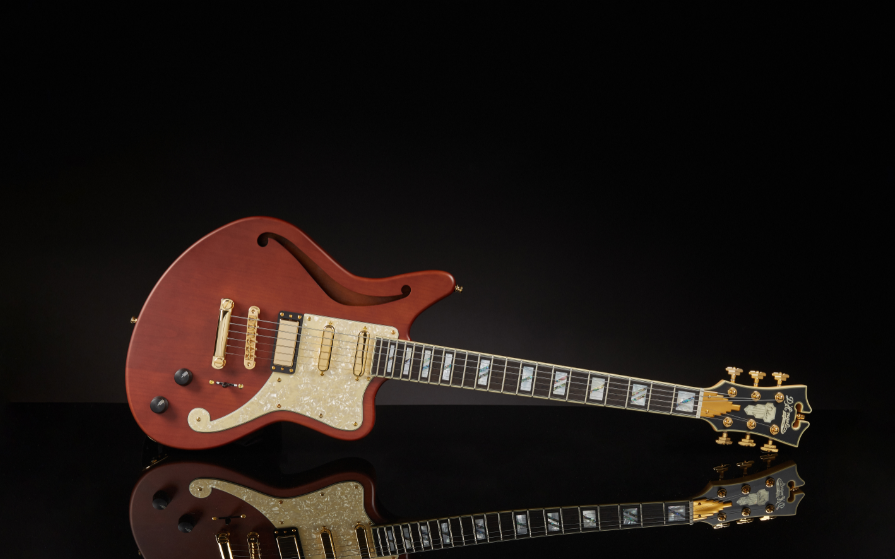 The Deluxe Series now hosts both D’Angelico’s most high-end solid bodies as well as all of its limited edition products.

All of these products can be found in the company’s rather spectacular looking showroom in the heart of Manhattan, “although it’s a humble little location in a way,” Kershaw describes. “From the street level you would have no idea that the showroom’s up there, so it’s a nice little gem that tends to surprise visitors when they come in.

“When I first went there for an interview I honestly had no idea what I was in for. The doors opened on the fourth floor, I saw the velvet curtains, the wooden walls lined with guitars, the leather couch, and thought ‘good lord, this is kind of a wild spot!’”

Despite its inability to exhibit at any kind of trade show this year or in the near future, D’Angelico is making sure that it stays connected with its customers in an effective way.

“I think it makes us feel even better about how big we’ve gone on the trade shows in the past five years, because now all of a sudden we don’t have the ability to do that,” says Kershaw. “We’ve really tried to make connections with our audience, our artists and our customers in the most meaningful ways possible, which is very difficult to do through marketing efforts remotely. We’ve tried to issue challenges, we’ve done giveaways, as well as getting involved in a number of fundraiser opportunities.” 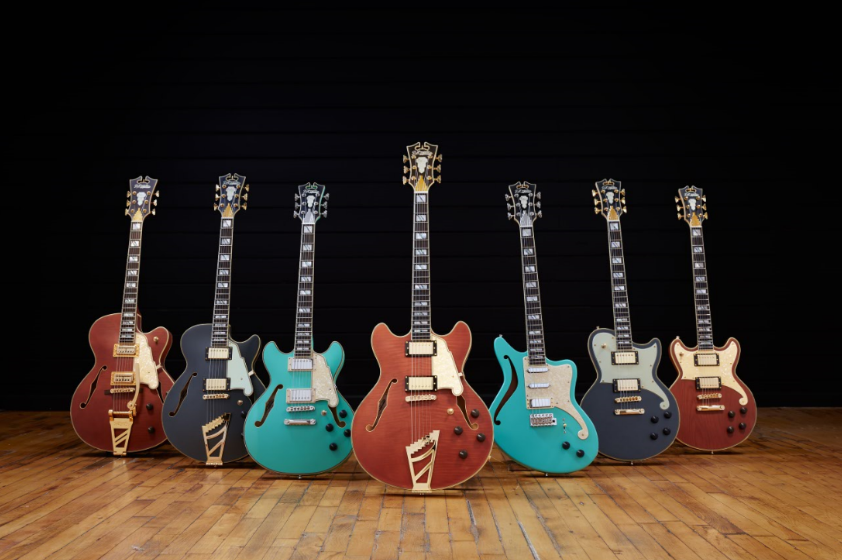