Eventide Audio has long been at the very forefront of several aspects of the music and audio industry at large, including guitar and effects pedals, plugins, rackmount, broadcast and more. Headliner endeavoured to see if they are still delivering the goods for pedal enthusiasts by having a lot of fun with a choice selection of their pedals, by seeing if they could complement two analogue synthesizers from Modal Electronics, the Argon8 and Cobalt8.

Eventide was one of the world’s first companies to manufacture digital audio processors, and its products are mainstays in sound recording and reproduction, postproduction, and broadcast studios. And considering they were founded in the basement of a New York City studio, it’s wonderful to see them as a hugely popular and established international brand.

So for this little experiment, Headliner opted for three of their flagship products: The Blackhole Reverb, UltraTap Pedal and MicroPitch Delay.

The Blackhole Reverb (pictured above) is already quite a name, not only in physical form, but it is very popular as a software plugin also. It is billed as an ‘otherwordly reverb’. This description certainly seems to suggest that those wanting ethereal and ambient textures are in the right place. It boasts five presets and many more available from Eventide’s website. The Predelay, Feedback and Gravity buttons are enough to whet the appetite.

The UltraTap pedal (pictured below) is a different prospect, offering tape delays, reverb, modulation and more, so fittingly described as ‘a multiverse of tone.’ It has onboard LFOs and envelopes, and the lovingly titled ‘Slurm’ control for smearing and slurring taps together to create unique reverbs and choruses. On top of all this, you can control feedback, the spread/distance between taps, and ‘chop’ for expressive modultations. 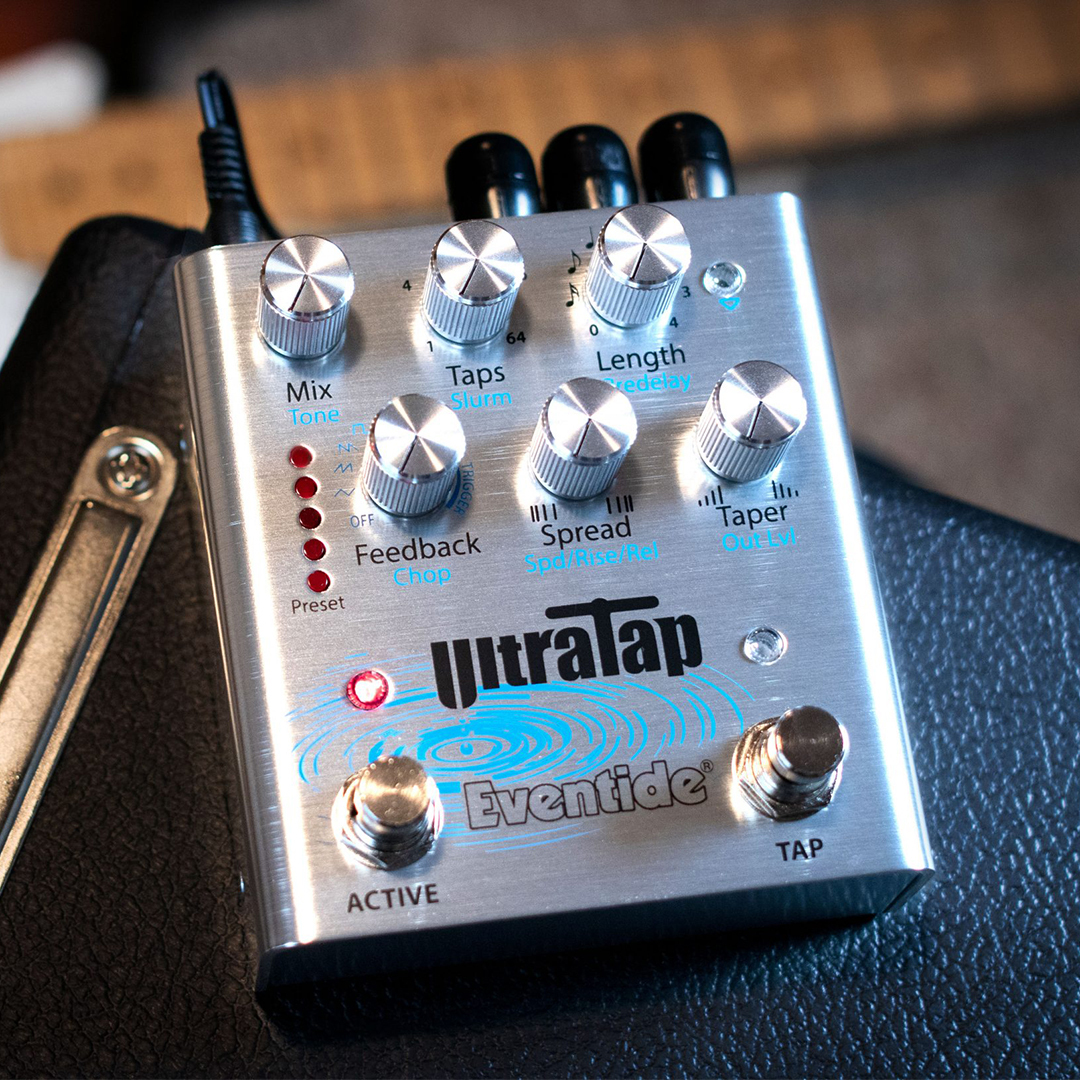 And completing the trio is the MicroPitch Delay, a lovely little red pedal, an iconic sound of Eventide’s that originated in the H910 and H949 Harmonizers, and later popularised with the H3000. It has positive envelope and negative envelope modulation sources, and can achieve subtle tone fattening, lush stereo widening, rich detuned delays, thick modulation, and tempo-synced special effects.

Being something of a reverb-head myself, I can’t resist first plugging in the Blackhole pedal. Once going, any fears that ‘as big as the cosmos’ just being overblown marketing gimmickry are quickly dismissed. You really can achieve the metaphysical almost as soon as the TS cable is plugged in. The Cobalt8’s pads gain even more warmth and charm rapidly.

But let’s not get carried away; as with the right settings, subtle and small verbs work beautifully as well, if you are simply seeking to add the right splash of colour and smaller spaciousness to your chosen instrument. But the fun really begins when you crank up the Mix, Gravity and Size buttons. The cosmos is an accurate reference point, as the word infinite keeps springing to mind when twiddling with them. There’s almost a danger of feeling like Matthew McConaughey in Interstellar. Especially when you can easily achieve that Hans Zimmer-esque synth hugeness with this little box at hand.

THERE’S ALMOST A DANGER OF FEELING LIKE MATTHEW MCCONAUGHEY IN INTERSTELLAR.

So with a giant green tick plastered onto the Blackhole, it’s time to add some delay to proceedings. And also reverb, modulation and a hell of a lot more. Enter the UltraTap. There’s many examples of how these quirky combinations of effects with delay can achieve fairly majestic results with synths (think Nils Frahm and Sigur Rós), but can the UltraTap do such business?

Well if you like things to be tastefully quirky, then my goodness, yes it can. The word infinite almost immediately springs to mind once more, as you can keep the delays hanging around to an almost ghostly extent. And with the modulation capabilities, that classic detuned quality of old synthesizers that sounds bad on paper but so many people adore goes off absolutely brilliantly here.

And as mentioned earlier, there’s so much power in the user’s hands in terms of controlling the delay. The Taps and Length buttons keep the power within reach. Delay is a notoriously difficult beast after all. With that said, though, the Feedback switch is where the spontaneous joy occurs, especially if you change it vigorously. 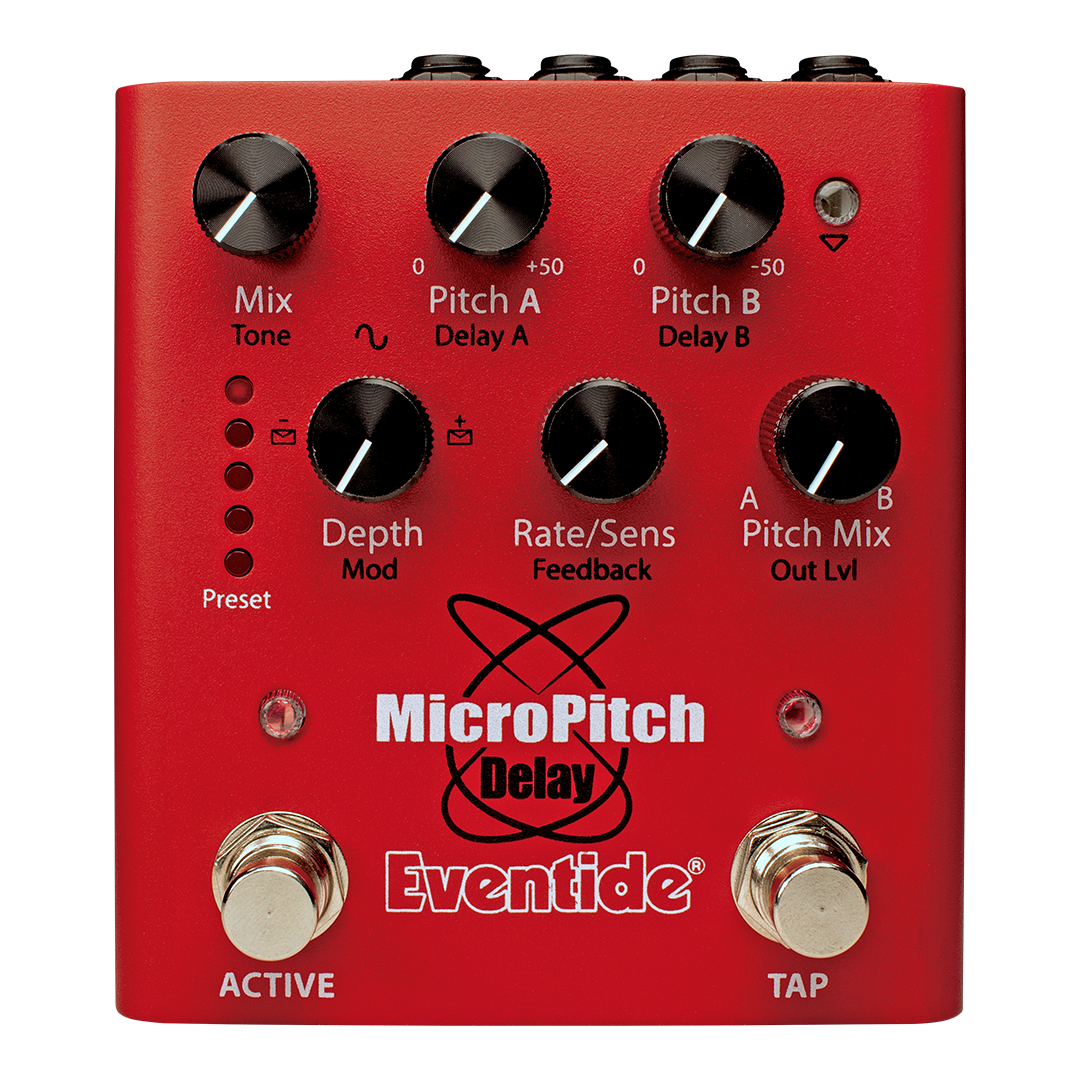 Last one to try is the little red box that is the MicroPitch Delay (pictured above). It’s almost unthinkable that this diminutive bit of gear, as attractive as it may be, is seeking to emulate the H910 and H949 Harmonizers of yesteryear. But we’re once again shown that you don’t always need giant racks to achieve great sounds. One of the Argon8’s preset sounds is a gorgeously quirky, staccato synth with a ping pong quality, and the MicroPitch compliments it wonderfully.

This sound in particular is so ripe for pitch shifting, and an enormous amount of fun is had with it. In fact, as the pedal has dual pitch shifting options, the possibilities are pretty endless. The stabby-synth pops and soars even when I’ve hardly touched the MicroPitch. That could be down to the luscious stereo widening within the pedal, the richly detuned delays, or any other multitude of things this pedal is able to do. Delay pedals are so often one-note and disappointing, but this little red machine is, once again, cosmic in its scope.

Eventide are keen to point out these aren’t just guitar pedals, and nor does this review want to give the impression they’re only great for keyboards either. Try them out with anything and you’ll almost certainly be deeply impressed. It turns out you don’t need the wealth of Branson or Bezos to be launched into space, just get one of these effects pedals instead.

Watch composer Adam Protz demonstrate the versatility of Eventide Blackhole, MicroPitch and UltraTap in the video below: