Inside The Belly Of The Beast: UK's First Neve 8424 Studio

Headliner recently went inside South London music production powerhouse Belly of the Beast, which at the end of 2020 became the first studio in the UK to install a Neve 8424 console. This super high-end recording location has played host to a string of eclectic UK artists over the years, from Dizzee Rascal to Arctic Monkeys. Studio manager/producer/mix engineer James Rand dives into a recent Burna Boy project while fellow mix engineer and producer Jack Williams demonstrates how the desk is equally suited to making techno music.

Over the years, the studio’s owner Nick ‘Cage’ Denton — who is also a successful producer and the manager of UK rap/grime superstar Dizzee Rascal — has been collecting all manner of outboard gear, kitting out the facility with some truly impressive racks of audio equipment in a bid to make the space more user friendly.

Unable to fulfil the potential of their old TL Audio VTC tube console due to workflow issues, the guys at Belly of the Beast were on the hunt for a shiny new desk, and so when Neve’s 8424 24-channel analogue mixing console was announced, they jumped at the opportunity to get their hands on one.

Headliner was treated to a full run-through of the 8424’s features by engineers James Rand and Jack Williams, who have each been using the desk for two very different projects.

“Mix A is just the DAW returns, but on Mix B we have it set up so that we have the mic ins in our live room, which are all routed and optionally routed to every preamp that we have in the control room,” explains Rand.

When it comes to preamps, the options are in abundance at Belly of the Beast, and include a vintage Neve 1066, vintage Neve 1081, a pair of Helios, an Avalon, a Chandler EMI, and a collection of various 500 series boxes from API, Shadow Hills and more.

And most importantly, there’s the two 1073s that come with the console itself, which Rand also routes into mix B and finds himself relying on for most projects.

“We can set up and shoot out different preamps quite easily with the XLR patch,” he adds. “For drums for example, if we need more of a rocky, distorted snare, we might use the Helios, but quite consistently we end up leaning on either the new or the old Neves for most things because they just work very, very quickly. They’re modern, punchy, and get the job done. 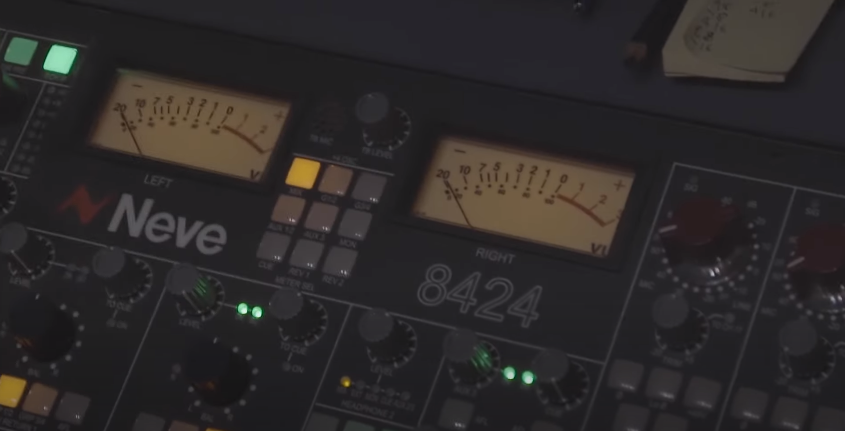 The inbuilt 1073s, amazing sounding DI's, and sublime usability and connectivity makes it easy to achieve a fast workflow to capture all the energy of a writing session.

“An example of a particularly elaborate tracking session is, every Friday, Nick and Jack come in here and make large, loud analogue techno, and there's a tonne of synths and outboard that gets used across the board on this thing. It might be a situation where they’re in a good place with it, but might want to leave it overnight, and so they can save how the whole thing was routed, make a few little notes based on what’s going on , and then it saves all the AUX routing and all the different presets. So for a recording session that's quite useful.”

When it comes to mixing on the 8424, Rand usually goes straight in on the mix vocal, sweetening it with the Manley limiter/compressor and running a parallel on the Vac Rac and distressor. He then builds a comprehensive vocal setup using a number of high-end reverbs, and puts that across a number of faders on the desk.

“Once I have all that set up, I print back into logic,” he explains. “And then I might make notes about how I had things set up in case I really do need to go back, but I usually like to commit quite quickly.

“It just feels like a really brilliant, modern equivalent to the older Neve desks. There's a big emphasis on space and stereo image; I feel the width dial to be approached with caution - for the most part it’s just a very subtle mid-size processor. Usually what I'll do is I'll turn it on, and just leave it at zero to 10%. Even when you have it set to zero, it just seems to make the mix sound super wide.”

The studio also recently upgraded to an Antelope Orion HD, which means Rand and co can now print all the channels, groups and master fader etc. straight back into the box, “which is just a dream.”

They also opted for the Neve 2264ALB limiter/compressor modules, which Rand says give a particularly nice, natural sound to vocals and acoustic guitar. 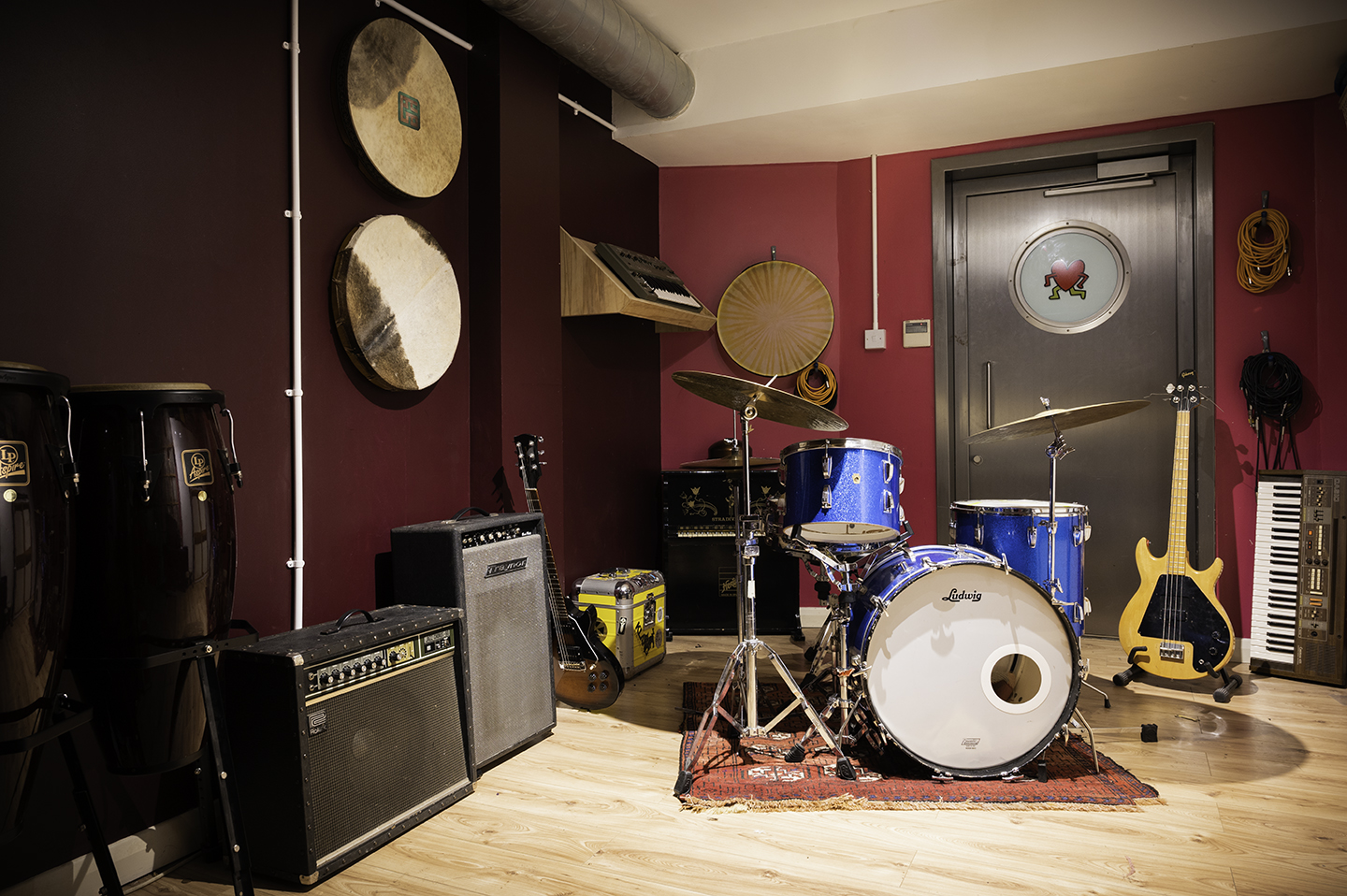 During Headliner’s visit, Rand demonstrated a recent session made with producer S.K.I.T.Z Beatz, who is a regular at Belly of the Beast. With a total of 216 tracks, it’s one of the bigger mixes that he finds himself working on.

“There were a lot of overdubs and live instrumentation that went into it,” Rand shares. “I'll have a large amount of the work done in the box on NS10s in the next room, and then when we want to get to a finishing stage, we'll group the tracks and then send it to all the different places. We are very much hoping to get the flying faders for the desk as well, so that we can really get into vocal rides and all that kind of stuff.

“Overall, the desk offers a unique and stylish base for all your outboard gear. Its well-thought out user interface offers incredible sonics with the convenience of total recall, and it pushes you to get inventive with parallel processing via its Mix C function. It’s a large format console sound with a small footprint.” 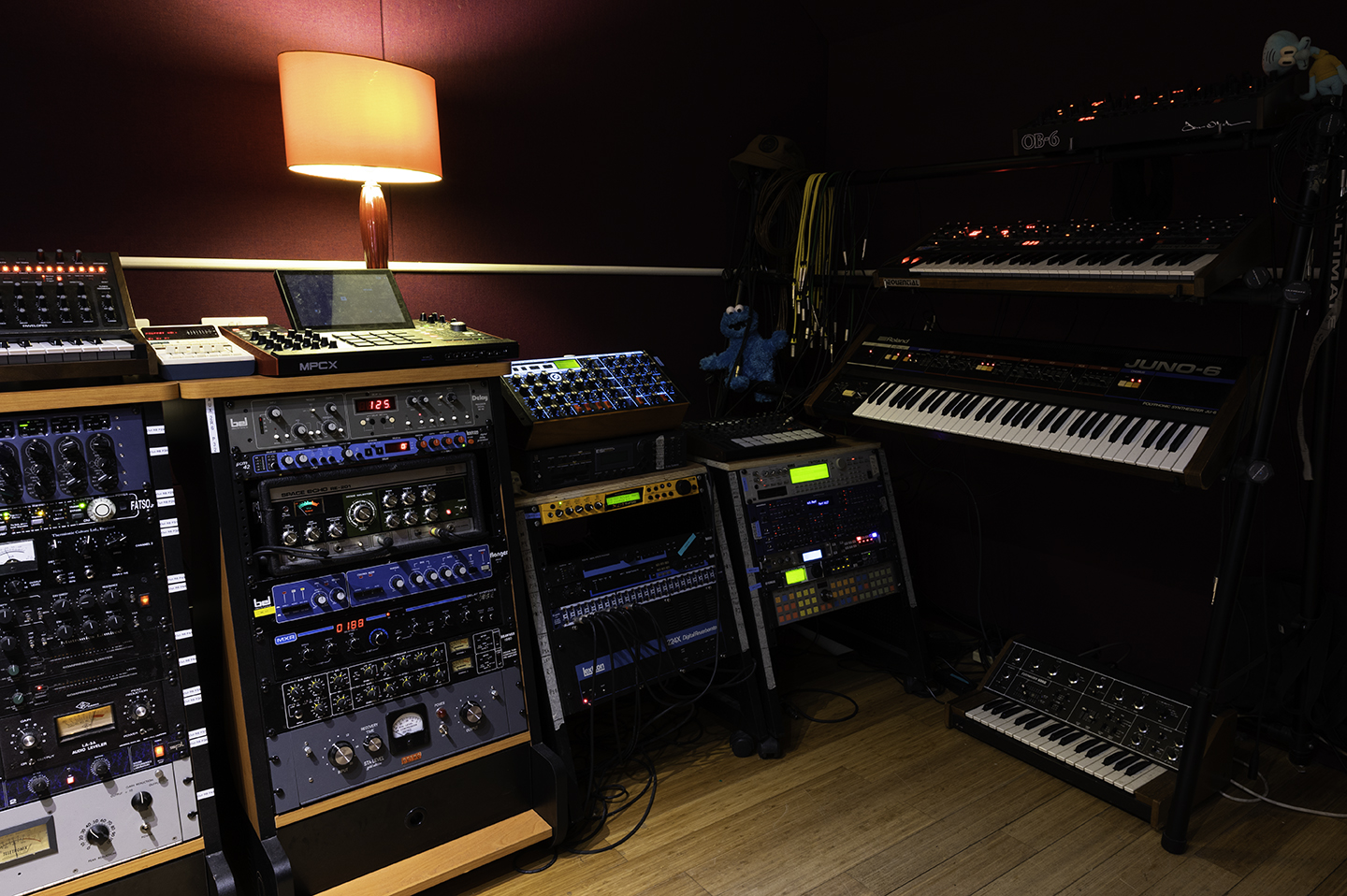 Meanwhile, choosing the right hardware and having a beefy analogue synth going straight into the desk makes it easy to get a heavy sound, as mix engineer and techno specialist Jack Williams explains.

“The desk compliments it [techno] really well; anything you want clean is always going to be super clean,” he says. “I really like the high shelf on the master, and use that quite a lot in sessions. I just have to give it a bit of excitement right from the start of the track, so I tend to lean more on the high shelf than the low shelf.

“Recently, I've started writing faders into the prints a lot more. I had a project with some strings on recently and it was so much better than overly compressing them or EQing them too much. It’s just to get the level balance right on your print on the way in, and then obviously there might be some fine tune automation to do afterwards, but it's like you’re giving life to the mix without having to crush anything or overly EQ anything. I think removing the temptation to EQ too early is really good.”

The studio’s owner, Nick ‘Cage’ Denton, adds: “The Neve 8424 has big functionality and a huge sound with a modest price tag. It’s a dream from a writing and production perspective. The inbuilt 1073s and the amazing sounding DIs, alongside sublime usability and connectivity to your interface and DAW, makes it easy to achieve a fast workflow to capture all the energy of a writing session.”

It’s safe to say there’ll be lots of music being cooked up at Belly of the Beast going forward, especially as we come out of lockdown. Check out the video below to see the desk in action.

Any enquiries can be made by getting in touch via Botb@mac.com.