We catch up with revered studio designer, Jan Morel, to find out more about his intricate work, and his partnership with acoustic specialists, Artnovion.

Morel and Headliner were both in attendance at the first Acoustic Summit in Porto a couple of months back, which was put on by Artnovion, so our conversation starts there.

“It certainly brought Artnovion into the picture, and gave it more exposure – because this is a relatively young company, but it is one with a serious focus about it,” Morel says. “Its in [Artnovion CEO] Jorge Castro’s head: he wants to organise those type of things; he thinks and lives only for acoustics.

“I thought the Summit was a very good event, and it will only get better; I’d like to see more students, and end users, because people need to understand acoustics, and these guys are the people to deliver that message. It will grow, and this was a good place to start.”

Castro was once a partner in Vicoustic, and when he left, he formed Artnovion. Morel got right behind him:

“Jorge had the right vision and belief; I liked that, so wanted to get involved. Now we are working together, and it’s working out great. I need people that understand what’s going on in my brain – a shrink, maybe? [laughs] But I wrote to Jorge, and he invited me to go and see him; we started talking, and it was clear from the beginning that he had real passion, and got what I was about.

“He knew what he was talking about – and I started designing panels for him, and he loves it. He basically uses me as a designer, and he does the maths involved in it. They are a very forward-thinking company.”

I ask Morel to break down the process from concept to creation – it’s quite the art form.

“First things first, I do sketches on this,” he says, pulling out a giant iPad. It’s the new iPad Pro, apparently – but I can’t believe how big it is. “When you have a big head, you need a big iPad! [laughs] So I make my sketches on here.”

Morel flicks through some of his recent sketches, all of which are incredible. Then I see what I assume is one of the finished studios, boasting his Antares desk from his Artovion line.

“Oh, that’s just a render,” Morel laughs. What?! “Yeah, that’s something else that Artnovion do - these amazing renders – they’re totally mind-blowing. And this helps me a great deal to visualise what the finished studios will look like. As I said, these guys are right on the cutting edge. They do everything that little bit better than the rest, in my opinion.

“The Artnovion package is very special. They are everything I want from a company, and it’s a great partnership, to be honest. A no-brainer. It’s great having my own line [of acoustic furniture] with them, and I will be more involved with them in the future. It’s a relationship I want to evolve, and I want to help the company grow.”

Morel shows me some of his designs – the stands of the desk legs double up as speaker stands, he tells me, and the Antares desk has an abosrber on the bottom, too. There is also bass trapping in the legs of the Vector desk.

“So if you put the Vector desk in your room, it improves it straight away,” Morel explains. “And we have bass trapping in the speaker stands, too; it’s the combination of the look, and the quality of product, that we go for.” 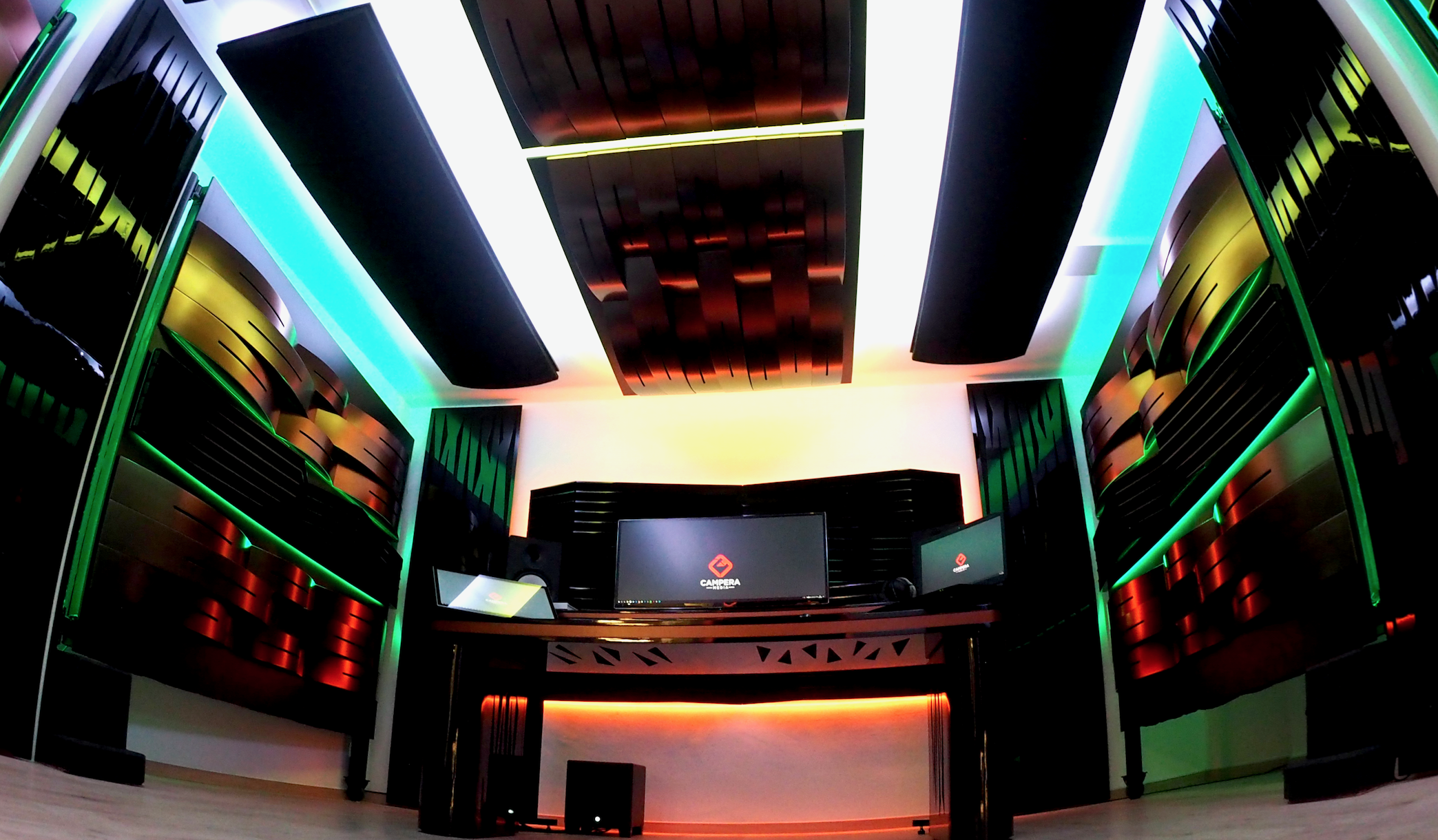 The Artnovion package is very special. They are everything I want from a company, and it’s a great partnership.

Morel describes himself as a creator:

“It all comes from somewhere, but I don’t know, where,” he smiles. “I start analysing a room with my eyes, not only my ears; calculations are largely done in my head, and it just works. Jorge is also a creator, and an acoustic designer: he creates the community. He has the vision of how to do it, and he is an engineer, but he gives me space, and wants me to make designs. I send him the new pattern – this one, for instance [pulls up a sketch on the iPad], then he’ll have some ideas, and we go from there. Panels used to be made of foam, and were not very sexy – this way, we can make them look incredible.”

I put it to Morel that he is actually a creator of environments: he makes places for people to be creative, and get inspired in. I ask what his most challenging build has been in recent times.

“Definitely James Deberadine’s studio, Club NOTO, which I took on three years ago - it’s in Philadelphia. He is a fan of Hardwell (who Morel is currently designing a new studio for in the Carribean), and the other revered DJs. We met up, he had some drawings with him, and he invested in a pair of Genelec 1236As – so it’s a very serious setup!

“He’s only 24, but he has an incredible place to create in, and a club! He invites all the important DJs in the world to play there.It was totally open plan before, but it took a year to transform it. It’s all breeze blocks, and then we put in a wooden frame, which we shaped to make it perfect, acoustically. These Genelec speakers are 400lbs each, with two 18-inch speakers in each; it’s the only studio monitor where you don’t need a subwoofer!
“We made three ‘wings’: small, medium, and large; and they are floating, so you break the standing waves, while also absorbing frequencies.”

Projects are bubbling all the time with Morel. In addition to the new Hardwell studio, he has taken on a huge project in Rotterdam for a DJ/producer, which will include ‘the vampire room’ – all in red, of course. Colour is a big part of Morel’s creative process, and he believes it helps inspire artists.

“They all want amazing colours, and many of the rooms I design and build have amazing lighting, which helps the artist or producer or DJ to get in the zone,” he says. “And switching it up can alter the whole mood and atmosphere within the space. The approach is a little different for the singer-songwriter than it is for a DJ: In Brussels, we have a huge control room two studio rooms to build.

“It’s also always more difficult to make a larger room sound better, and some different acoustic treatment is required for musicians playing in a space; you want to keep some of the reflections, and the live vibe. You need to hear the finger snap in the room!