Today, for the first time, I will be putting my full guitar rig not through a PA system, a pair of studio monitors, or guitar cab... I’ll be working my way through rock and roll riffs and reverb-laden melodies in somewhat more of a closed-off environment – through a pair of JH Audio’s Lola in-ear monitors. Slash is a big fan - but can these IEMs really replicate the sonics, guts, and thrill of playing through a classic guitar cabinet?

Lola is one of JH Audio’s more recent pieces, and was designed with guitarists in mind – founder, Jerry Harvey, actually worked quite closely with Guns ‘N Roses guitar hero, Slash, on putting this piece together – and if you can convince a guy who’s relied on gargantuan stacks of Marshalls for half a lifetime when touring the world that a pair of earphones would be a better option – well, you’ve got to be onto something.

I’ve played occasional shows with IEMs in – admittedly not this quality of earpiece, as technology has evolved enormously in this field since the mid-noughties, when I used to gig – but I never really got on with them as a guitarist/vocalist. I’d wear one ear in - still a common thing to do with IEMs - which I think helped keep me in tune, but playing in a rock band, I found I missed the sound of the stage and the tone of the guitar unless I dropped at least one ear out; and that’s probably why today, so many guitar bands still opt to have their amps roaring and stage wedges pumping. Who doesn’t want volume, vibe and energy when they’re performing?

I’m not on stage today – only my own soap box – but I have decided to see what these Lolas can do, and I’m going to be putting my custom ‘70s Vintera Telecaster through its paces from clean tones to some proper high gain stuff. I’m also ‘with band’ – I’ve got a great rhythm section recorded who will be joining me in my ears, and I’m raring to go.

Sat comfortably in my fancy studio chair (but with guitar strap attached, should I feel the need to launch into performer mode), this is the full chain: Tele into Vox head, DI out into Strymon Big Sky, stereo out of the Strymon into a Merging Anubis, then into my ears via one of the Anubis’ headphone
amplifiers. The Anubis is, of course, a very high-end audio interface, and can do pretty much anything in terms of audio application – but the reason for using this unit today is its incredibly transparent, high quality headphone amplifiers. If you’ve been fortunate enough to visit JH Audio and listen to their products – which I have – then you’ll know that when demoing the piece for you, one of the team will likely hand you a hi-res audio player with a series of albums on in tandem with the IEMs so you can get as good a sound as possible. They don’t want you to listen to Spotify (thankfully!), put it that way. The signal from the Anubis is basically unbeatable, so we’re definitely going to get an accurate sonic representation here. 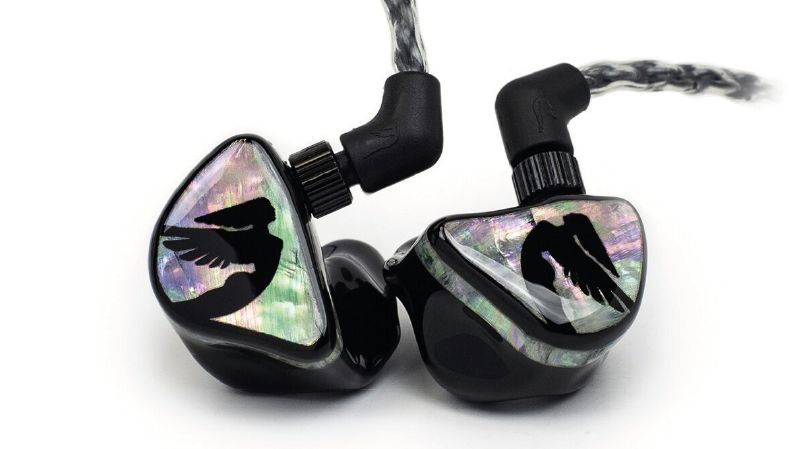 Due to its architecture and sonic accuracy, Lola is not only a great stage IEM, it's the perfect tool to track and submix guitars in the studio...

I start throwing some musical shapes via the crunch channel and without band for now, and the stereo width of the Strymon’s reverbs are really something in the Lolas. After enjoying that experience for a while, going back and forth from cleans to crunch to heavier distortions, I bypass the reverb and start to play with the core tone of the Vox. I notice immediately that the action happens in the midrange with this piece, which makes full sense, as most guitars without middle aren’t going to be up to very much. I’m also noticing that as I dial in more bass into Lola via its 4-pin Moon Audio cable, it’s getting more exciting.

There’s also a really interesting sensation when I turn down the treble on the Vox – initially to see how just low I can go, to be honest (and the answer is, very) - but once it’s the whole way down, with the middle at around three o’clock and bass at five o’clock, and as I flick the pickup from neck to bridge, there is this sudden bitey thickness with a gutsy compressed sound that I instantly love. It’s like a fuzz but with more clarity – and I’ve never heard the Tele achieve this (probably because I would never ordinarily choose these settings). The guitar is providing the bite, so I bring in the band in – they’re creating a 4/4 groove at 91BPM - and begin playing along.

At this point, I genuinely find myself standing up playing. Make of that what you will! There is a little extra sub on the kick and the bass guitar to add that vibe (perhaps something I’d ask for from my monitor engineer in the unlikely event I’ll ever have one of those), and what I notice very quickly is that this tone is cutting through the mix; I’m hearing the bass with perfect clarity locked in with the kick drum but the guitar remains right in my face. And again, it’s because the mids are working so well for me. I continue to make a number of small adjustments to the tone, and bring the Strymon in and out on occasion for a fantastically wide sound.

I realise about 15 minutes in that this actually feels like a band rehearsal – and I haven’t had one of those for a long time..! An hour later, I’ve layered four different guitar parts over a chorus, tweaking the tone a little differently for each one. I briefly switch to a pair of reference headphones to hear ‘the mix’ so to speak. The guitars are too loud (surprise, surprise!) but wow, they sound ballsy! Now, I’m not suggesting you should mix a multitrack on Lolas (though, never say never – I know a two-time Grammy-winning producer who finalised a mix on a plane using a custom set of JH Roxannes – true story) - but in terms of referencing tone, it’s a big fat yes. To confirm my findings, I lose the ears altogether and bring in my Genelec studio monitors with paired sub and listen back. After mixing the levels for a few minutes – no EQ, just levels – I’m pretty astounded at what I’m listening to.