Following on from Headliner’s recent look at Leapwing Audio’s excellent range of One plugins is CenterOne – an updated version of the company’s first plugin product which was launched some five years ago. This latest revision, available now, has added a number of really useful features, and this is what we’ll be looking at today...

Leapwing Audio is a developer that has come up with a number of truly unique products; tools which have found ways of tackling age-old problems with new ideas and a fresh new approach.

CenterOne is a spatial plugin designed to give you full control and manipulation of your phantom centre. Now, if you’re not familiar with the term ‘phantom centre’, this is simply the audio that sits between the two speakers within a stereo image, and sounds as though it is coming from a non-existent centre speaker.

Traditionally, spatial plugins use mid-side techniques to manipulate the stereo image. The concept of mid-side can be a little difficult to get your head around, not to mention the fact that it can be approached in different ways. It’s here again that Leapwing differs from the mid-side algorithms and actually sets up as a left-centre-right rebalancing plugin, all while giving you a really comprehensive palette of tools with which to extract, control and manipulate your centre image. 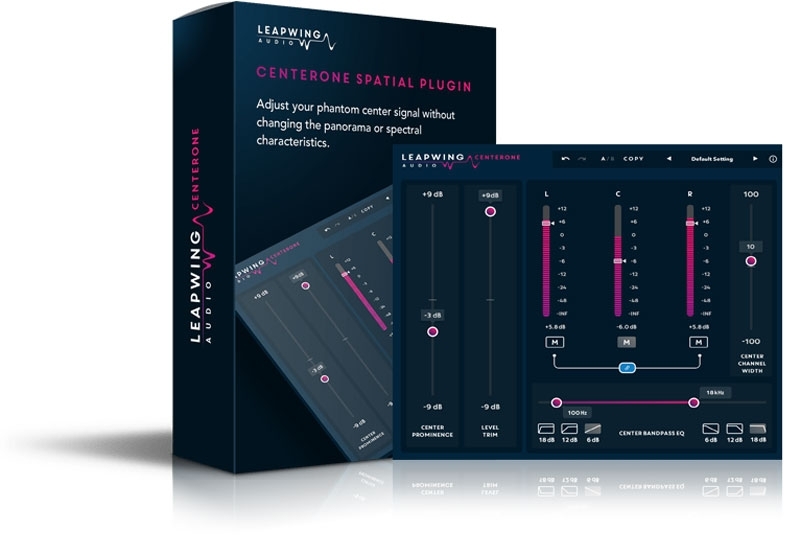 As with all the Leapwing plugins, there’s a clear and logical GUI which is fairly self-explanatory, easy to use and easy to read at a glance. In the centre of the GUI is the left, centre and right level faders, of which the left and right can be linked or unlinked. There is a mute on each feed to allow for easy processing in isolation. On the left is a centre prominence and a level trim to allow you to compensate when A/B-ing between processed and unprocessed, using the purple/blue bypass button. To the right is the centre channel width fader and along the bottom is the centre bandpass EQ, but more about these later. At the top is Leapwing’s familiar preset system with a handy range of factory presets, along with the ability to create and store your own.

Bring it Back, Send it Forward

One of the key features, should your DAW configuration allow, is the ability to create lossless left, centre and right stems for individual manipulation and further processing. However, there is such a comprehensive range of tools onboard that simply using it on your stereo master channel gives you a range and scope of phantom centre manipulation I have not heard from any alternative plugin.

For example, the Centre Prominence fader, with its rather large cut and boost of +/-9dB is not simply an alternative centre level control; it sounds like it is bringing prominent elements, like the vocal, forward in the mix or sending it back. Together with manipulation of the centre bandpass EQ, you can focus on individual solo instruments – the voice or kick or bass – and rebalance them, all without affecting the overall stereo image.

The ability to include or exclude some of the stereo information is definitely a bonus, and adds further control to a very clever plugin.

In addition to the centre prominence, there is also the centre width control, which widens or narrows the scope of what the algorithm defines as phantom centre. This can be perceived as either a widening of the overall image, as the centre channel width is reduced, or an increase in centre weight as more off-centre audio information is added.

Centre Width adds yet another level of manipulation which I’ve not seen on other spatial plugins. Obviously, if you’re creating left-centre-right stems, this ability to include or exclude some of the stereo information is definitely a bonus, and adds further control to a very clever plugin.

One of the most impressive things about CenterOne is the sound quality. Even the extracted centre channel in isolation with a large amount of processing – while not completely free from artefacts – is still impressive, and when put back in context is quite remarkable. I can’t think of any other spatial plugin that behaves in this way, and while there are a fair few, I’m also unable to think of a single one that sounds as good as CenterOne. 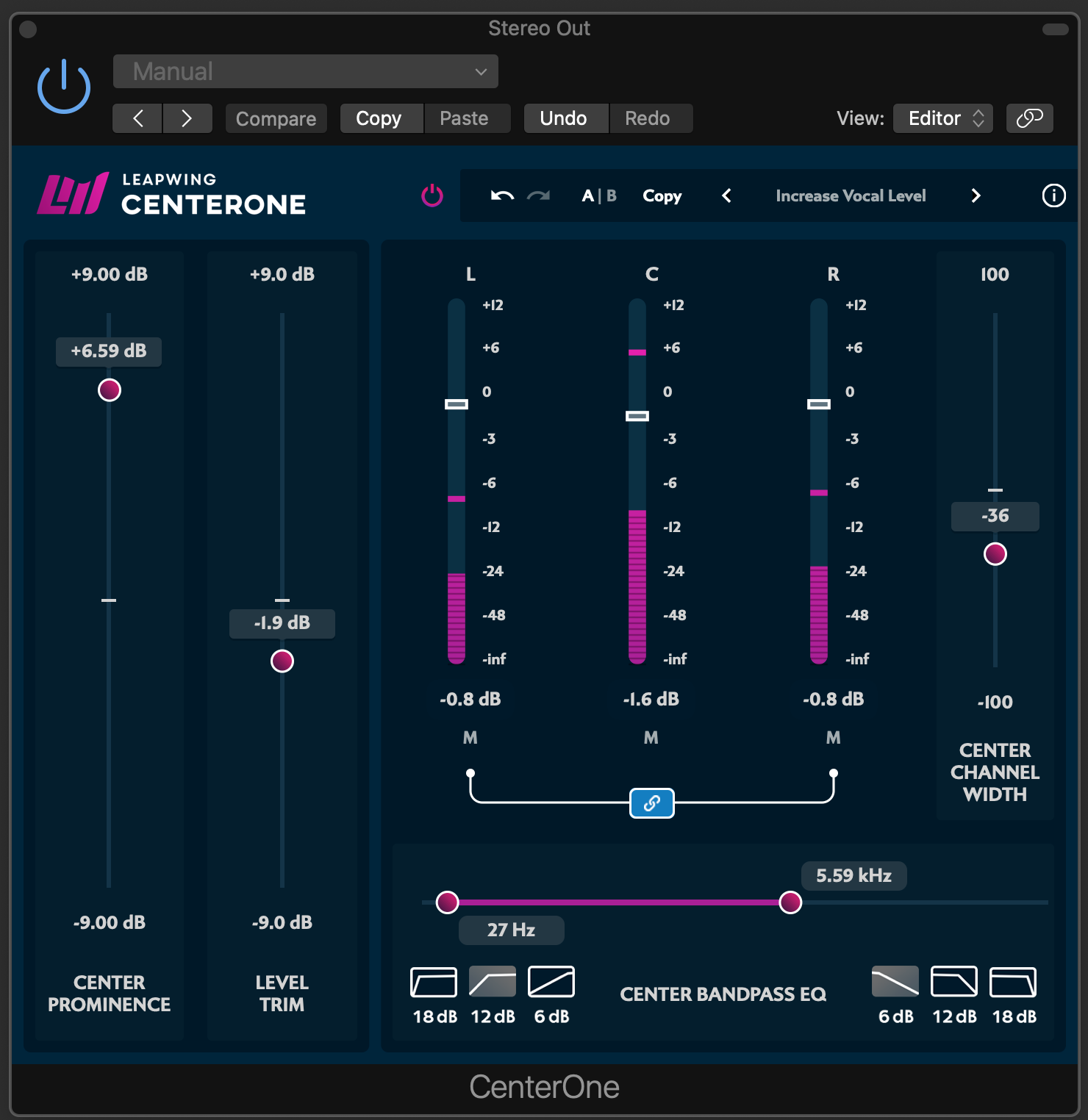 I can see this as a tool which could enhance modern dance, electronica and R&B with its ability to control and shape centre bass information, as well as subdue a prominent vocal. Likewise, it was also easy to lift a slightly lost vocal out of its stereo reverb, and bring out the vocal performance.

While CenterOne – like RootOne, StageOne and DynOne – is aimed squarely at the field of mastering, I wouldn’t be surprised if CenterOne, if not all of the aforementioned plugins have found their way into the armoury of mix tools being used by today’s engineers. Bearing in mind this version is pretty close to the original CenterOne plugin first released by Leapwing Audio some five years ago, I’m surprised someone else hasn’t attempted to emulate what is clearly a very useful and cleverly thought out audio tool.

CenterOne is available in 64-bit only on Mac OS X and Windows in AAX-Native, VST, VST3 and AU formats. If you’re interested in trying out this plugin, I suggest you head over to Leapwing Audio’s website and take advantage of the free, fully functional 30-day trial.