I was fortunate enough to be invited along to a demonstration of CODA Audio’s Immersive SPACE system. Having heard CODA’s line array and column systems in use, it is fair to say I was already impressed by the brand, but the 3D Immersive SPACE would prove to be something else entirely.

Sitting in the demo room at CODA’s Hannover HQ, I found myself in the centre of a 13.1 immersive system. This is by no means the limitation of the Immersive SPACE, which offers 128 outputs if required, driven by the brand’s groundbreaking Space Hub processor.

And then, the demo started.

My first listen of the 3D Immersive SPACE was a demo of a movie theme. In fact, my very first experience was a soloed acapella from that track. One vocal line. 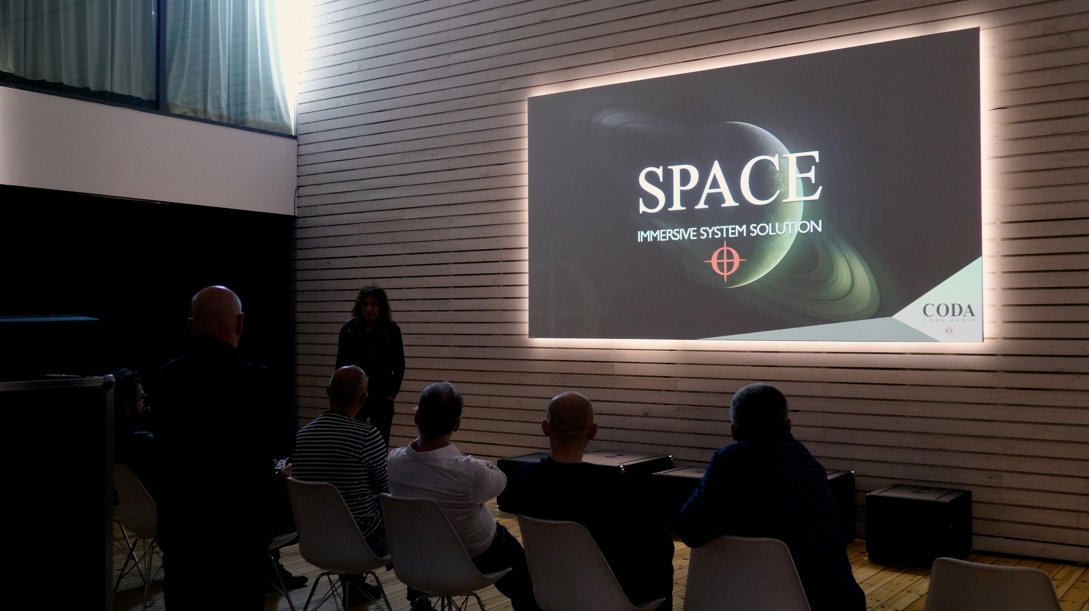 With a few clicks on the Space HUB control software, the vocals glided through the room. Unlike some other systems I’ve listened to, there were no jitters or obvious crossfading as the sound flowed smoothly through the speakers. The sound moved from left to right, and even swept over the Z-plane from the front of the room, to the top, and to the back.

Now the system had my attention.

This kind of smooth movement and sense of…well, space, was not like the other systems I had experienced. It would soon become clear why CODA’s is different.

Next, we were led through 3D immersive mixes of Ocean Eyes by Billie Eilish, and Bohemian Rhapsody. It was then, hearing songs that I had already listened to in various mixes and on various systems, that the difference became even more striking.

Now, it feels like virtually every electronics manufacturer is making a system they like to call “immersive”. The truth is that this magic word means something a little bit different in everyone’s own personal dictionary. Listening to CODA Audio’s Immersive SPACE, it was clear. This is immersive. This is 3D.

We’ve all heard Bohemian Rhapsody approximately 7,381 times. This time, it was different. The harmonies grew around me from all around the room. I heard new details in Freddie’s vocals. I heard more detail and fidelity in the guitars, and the drums came to life as if Roger Taylor were sitting in front of me.

The mix had movement, and it filled the room in 360, but perhaps even more strikingly, everything had its own place, in a way that doesn’t feel possible with a stereo system. That’s what is so exciting about this 3D system. Suddenly, I wanted to hear what was possible with all of my music collection.

This kind of smooth movement and sense of space was not like the other systems I had experienced.

So why is it so different? How is this possible in the CODA Immersive SPACE? With a focus on phase, and the time domain.

True unity is achieved in the system by creating a phase-linear set of speakers. The sound from CODA’s speakers hits your ears in unison, no matter where in the 3D space the sound is positioned, how far the stereo spread, and how much the sound moves around during playback.

With mixed systems, or just those without phase coherency, phase quickly becomes a mess. Though most systems are able to give an approximation of the sound of a helicopter moving around or the soundscape of a jungle, there are differences in the speakers. In most systems, the sound doesn’t hit your ears at the perfect time. There’s some sense of movement in those systems, but CODA has hit the nail on the head when it comes to a coherent and smooth system.

The result is steady movement without the sound jittering or becoming muddy as it hits you from all of these different speakers. Sometimes with other immersive spaces, you can hear the crossover as the sound gets transported through the speakers. Not with the CODA system.

Hearing CODA founder Svetly Alexandrov speak in detail regarding the focus on the time domain outlined how important this is. 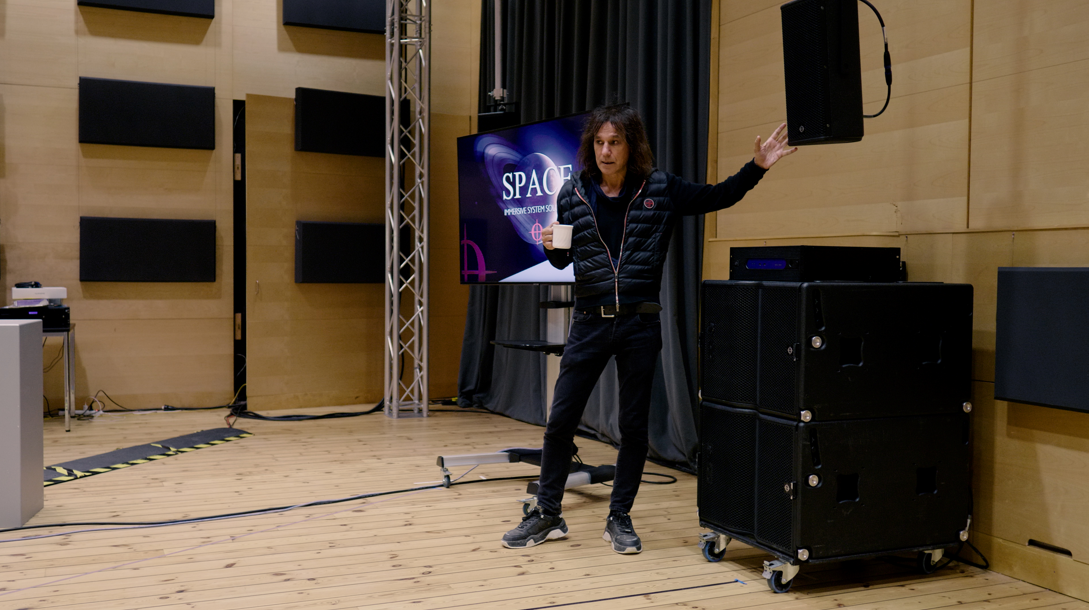 CODA systems take into account every single aspect of the time domain, right out of the box. Using CODA’s DS-FIR multisampling and filters, the system is precise and efficient. The result is a latency of just 11ms, unheard of when it comes to systems that can boast linear phase. Many other systems trying to get a linear response end up with a far longer time window, a delay of up to 60ms, which isn’t workable for most systems, and the result is muddy, and noticeably delayed.

Systems that do accomplish linear responses can’t offer what CODA can – the same phase linearity across all frequencies and a high fidelity sound that doesn’t degrade with loads of complex processing. Even Interaural Time Difference (ITD) and Interaural Level Difference (ILD) are accounted for in the CODA system.

Simply put, these are part of the systems our brains have developed to understand what is going on around us. We can perceive where sound is, even with our eyes closed, thanks to the difference in volume (ILD), and the difference in time in the sound reaching each of our ears (ITD). We’re talking in nanoseconds.

The phase coherency of the CODA system is such that, unlike with some other systems, the sound reaches our ears in line with what our brain is expecting, allowing us to perfectly place every single object. If audio systems expect to provide a true 3D field with long delays in the vibrations hitting our ears, the system is inevitably going to sound muddy and unclear, the opposite of what CODA has achieved. Clarity and unity in 3D sound. 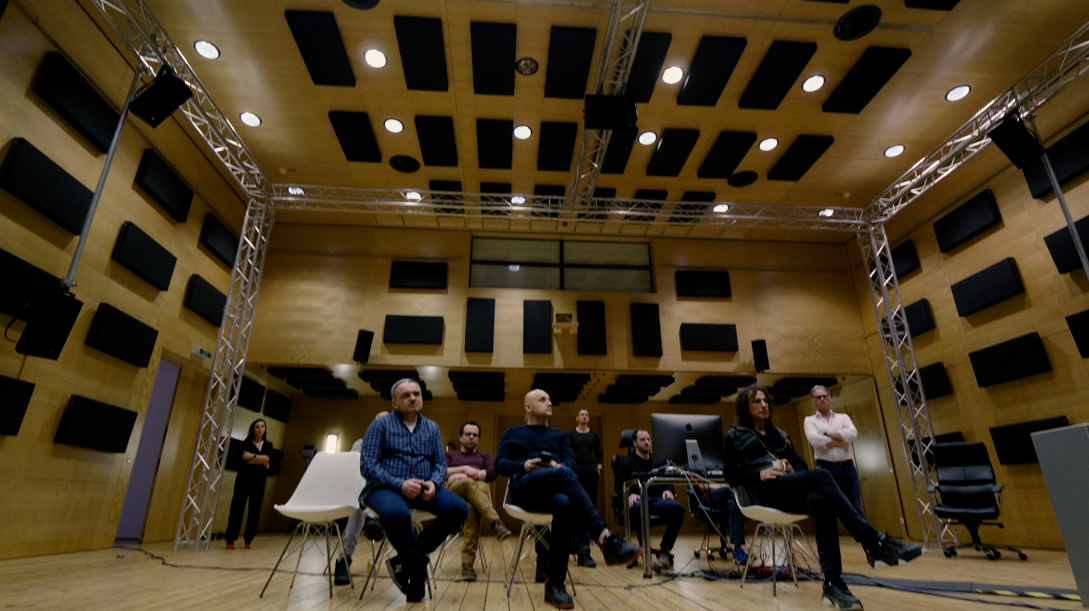 CODA’s Immersive SPACE feels like putting on your glasses after fumbling around in the dark looking for them. The sound suddenly comes into “focus”. Even if you were happy with your previous solution (the audio equivalent of walking around without any glasses) you’ll suddenly realise just what it means to have true focus.

In the demo, we were even able to hear the space tuned in two different ways, one with a number of reference points within the 3D space, ensuring that the speakers were as close as possible to hitting your ears at the exact time needed to pinpoint the sound in the 3D field.

With visual cues (such as those you’d have in a cinema or at a theatre show) the pinpoint accuracy of the system was even more evident. The ability for the system to follow visuals, or to build upon this soundscape with extra sound effects, opens a whole 3D universe of possibilities for visual applications.

I left the demo with my head whirring with possibility, considering all of the opportunities that a truly 3D and coherent system could bring. I also left with a desire to bring 15 years worth of audio mixes collected with me to breathe fresh life into, should I be lucky enough to return.