What does Apple Silicon’s new M1 chip offer, how does it perform against the entry models it replaces, and more importantly, is it suitable for music production?

We’ve been hearing the debate rage on for some months now: should we wait, or should we buy the new 2020 iMac? Which is, unusually for Apple, a very good spec for the money, and you can upgrade the memory yourself to 64Gb for under £300; likewise, external SSDs for a fraction of the cost of an Apple upgrade.

And let’s be honest here, unless you’re professionally writing and recording film scores with a full orchestra, a Mac Pro is simply a world away. Over time, software has moved forward: it’s now sophisticated, comprehensive, and fully featured; and it often feels like the Mac computer has struggled to keep pace.

It has also been a long held belief that while Mac software represents great value for money, the hardware does not! This has spurred on many a site, and many individuals building Hackintosh machines for specific applications which offer a greater level of performance at a fraction of the cost of a comparable Mac.

New Mac, new look? Not exactly. It’s pretty much identical to the Intel Mac Mini, however it is lighter. Apple has changed its appearance back to traditional silver which, from a personal preference point of view, doesn’t look quite as cool tucked to the side of my monitor - but a very minor issue, admittedly. The Apple Silicon range so far is limited to just two memory configuration options: 8Gb or 16Gb.

One would have thought in this day and age that Apple would have dropped the almost pointless 8Gb option altogether and just gone with a 16Gb machine as standard. Bearing in mind the memory is now part of their System on a Chip architecture (SoC), this might have at least temporarily masked Apple’s persistence in continuing its policy of relentless overcharging for larger memory configurations.

One potentially major issue when it comes to music production is the removal of two Thunderbolt ports. This is a serious blow for me, as I now need to go and purchase a hub of some description to accommodate my additional I/O. Sadly, my external GPU is no longer supported from Thunderbolt, so another reason for the hub, as without it, I lose two of my three monitors.

As it stands I will lose one anyway because the new Mac Mini M1 only supports two monitors in total: one from its HDMI port, one from one of its two Thunderbolt ports. So while it is £100 less than the entry level Intel i3, it will likely cost you more than that to add the connectivity Apple has seen fit to remove. Sadly this is something the brand has also done on the Apple Silicon version of the MacBook Pro.

If the move to Apple Silicon was in the interests of vastly improved performance and providing a real value for money experience for its users, then I didn’t quite get that.

It wasn’t that long ago that Apple gave the impression that if you wanted upgradable graphics capability and futureproof multiple monitor setup, then eGPU was the way to go, so with vastly reduced memory configuration options, missing TB3 ports, and no eGPU support, it’s not the ideal first impression to make on budding bedroom producers. Thankfully, that’s not the whole story. Gripes aside, what’s really on review here is Apple’s new ARM based M1 SoC.

This is a viable option for home studios that want an affordable, high-spec machine that allows for a deeper dive into music production.

This is the integration of eight cores: four performance, four efficiency; an eight-core GPU and a 16-core Neural Engine which I believe is a software-based algorithmic solution to make more efficient use of available processing cores as opposed to additional hardware cores.

An all-in-one chip, you get either 8Gb or 16Gb of high performance unified memory, a Thunderbolt/USB 4 controller, and a Gen 4 PCIe controller along with advanced power management - security features first developed for Apple’s T2 chip and NVMe storage. So that explains why it’s lighter than its predecessor, and why it uses significantly less power.

In the Apple Silicon MacBook Pro and Air, this has translated into a vastly improved battery life with figures almost double the previous entry level models. Similar SSD options are as before with 256Gb entry level up to 2TB on offer.

All of the available options are fixed, so your configuration can’t be upgraded later. If you already run SSD arrays then your options are simple: memory, memory and more… oh hold on, it’s maxed at 16Gb… but it is possible that, being unified memory on the same chip, you’ll get far more efficient use of available RAM.

One other thing I noticed configuration-wise is the lack of a 10Gb Ethernet port option which, while not a hindrance to many, may well slow down those who backup to high-speed network storage.

Firstly, I must state that the Mac Mini M1 is a direct replacement for the entry level 2018 i3 Mac Mini - and let’s be honest, only a fool would have bought one of these with making music in mind. So to be fair we had to track one down so that we could make a direct comparison rather than use the i7 Mac Mini.

Luckily, we managed to find one that also came with 16Gb of RAM like our M1. We also have a 2020 iMac which originally came from Amazon a few months back, saving us just over £100. It was upgraded with a 64Gb memory kit - 2 x 32Gb of Mac compatible memory from Crucial for £260, saving £740 on Apple’s memory upgrade price.

This is also something you can no longer do on the Intel Mac Minis or any of Apple’s current laptop range. Ironically, the iMac also has only two Thunderbolt 3 ports, so we had to buy a hub for this which allowed us to run three monitors as well as a UAD Apollo x8p and some external disk libraries etc. I also have my old 2015 MacBook Pro, so between us, there are a number of machines to compare the M1 to!

With lockdown still in action, three of these machines were at different locations, so to get some benchmarks there were a lot of Zoom, Messenger, and WhatsApp calls going on to make sure we were all running comparable tests to find out accurate CPU and GPU efficiency using the standard Geekbench and Cinebench protocols.

It suddenly becomes very clear that Apple has made an astonishing move with this new chip, and that if future Apple Silicon incarnations improve their high end machines by similar percentages, then the hardware as well as the software suddenly and finally starts to look like real value for money. Graphics performance followed a very similar pattern, with the 2020 iMac returning a single core score of 1,295 and a multi-core score of 12,159. 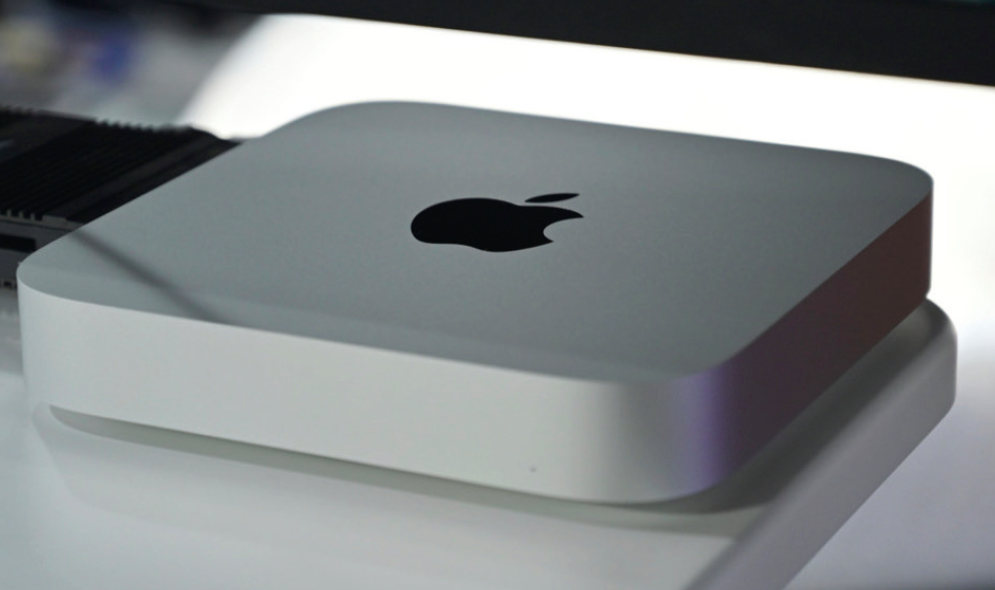 The M1 Mac Mini scored 1,518 and 7,828 in comparison; the 2018 Intel i3 Mac Mini recorded 942 and 3,670 respectively; and the 2016 MacBook Pro offered a single core score of 761, and multi-core of 1,840. While the iMac and the M1 Mac Mini stayed silent during these tests, the Intel Mac Mini and the MacBook Pro did not - the later being so noisy and chucking out so much heat I thought it might die under the strain!

The iMac produced some heat while the M1 Mac Mini seemed cool to the touch; I noticed its fan did come on during the Cinebench tests, but it was more noticeable for its vibrations than any noise - another major bonus for music makers. In reality, the new M1 Mac never broke a sweat, and it didn’t get anything like warm, unlike all of the Intel machines. All while using less power, of course - and that’s also going to be important as we all strive to reduce our carbon footprint.

So far, Logic and GarageBand have been optimised for Apple Silicon, but we immediately had issues loading projects with existing plugins assigned, as it seems you can’t run a DAW that runs natively in Apple Silicon and plugins that require Rosetta 2 at the same time. GarageBand worked fine, and we successfully loaded old projects as well as new.

If you do decide to take the plunge and you’ve been using Logic Pro for a while, keep your previous projects on your current machine - and in Catalina - as there are a number of instruments and plugins that are still not happy in Big Sur, which would suggest they’ll be even more uncomfortable with Rosetta 2 and the Apple Silicon version of Logic.

In the real world, we have already In 2020, while all the news has been negative and many have suffered economic hardship as a result, especially in the entertainment industry, Apple has had its best year yet. That’s partly to do with increases in laptop sales and the Western hemisphere’s lack of freedom to do much more than Zoom and Skype.

The introduction of a new M1 MacBook Pro and MacBook - both of which have similar performance to our M1 Mac Mini - proves Apple is heading in the right direction, as all of these M1 machines make a bold statement of intent. Our Mac Mini easily put to shame the model heard a number of horror stories from people who have attempted to upgrade to Big Sur and been left with a blank screen.

Too soon people, far too soon! But if you’re adamant this is the way to go, back everything up and say a little prayer...