Marta Salogni is an Italian producer, mixer, and engineer. She won the MPG Award for British Breakthrough Engineer last year, and has worked with a string of acclaimed artists including Bjork, Goldfrapp, Django Django, Alex Cameron, and Factory Floor. A couple of months ago, she moved into a new studio in the heart of London Fields. It’s airy, it’s spacious, there’s plenty of natural light (a prerequisite, she says), and some epic analogue kit. It’s also recently been calibrated, so it’s sounding better than ever.

“Before I moved in [during January], I was based in Hammersmith at a studio where [record label] Mute is; I took over their studio about two and a half years ago, when I was on a project for Goldfrapp,” Salogni explains. “My dream was always to have my own studio: my own place where I could put the desk that I wanted to mix on, and build my ideal setup.”

Which is exactly what she’s done. Salogni’s studio centrepiece is a real one-off: a Studer console, which never officially saw the light of day. And it sounds beautiful.

“This Studer was built in 1976; I found it in Switzerland, and it’s a prototype of two desks together,” she explains. “So a meter bridge joins them, but the end of the console can be taken out, and used for mobile recordings, as it has an internal power supply. It’s in brilliant condition, probably as it was used to record mainly classical stuff, so it hasn’t been smashed by too much loud music! So even cosmetically it’s in really good condition, especially as it’s quite an
old desk now.”

Salogni says she wanted the ‘feel’ of pushing the faders up, and to not spend her time just looking at the screen, staring at the blank space between the speakers.

“We spent quite a lot of time integrating it with Pro Tools, because I use Pro Tools to mix, and I have to maintain that dichotomy; you know, the digital and the analogue, to line up all the outputs so that the faders are all the same,” she says. “I modified it so I could have direct outputs on all of my channels, and use it how I think a desk should work.”

Salogni’s first ever studio project took place at State of the Ark in Richmond, which is now in the process of closing its doors permanently.

“I remember seeing an ad for the studio in Tape Op [magazine], and at the time, I was compiling a list of studios that I really wished I could work for, and this was at the top. So I asked if I could come and make teas, and tidy up after a session – and they agreed. Dan, the studio manager, showed me the studio, then a couple of days after, he called me up to do a session as a runner. That was my very first day in a studio, and it was so good, I just felt I needed to be there!” 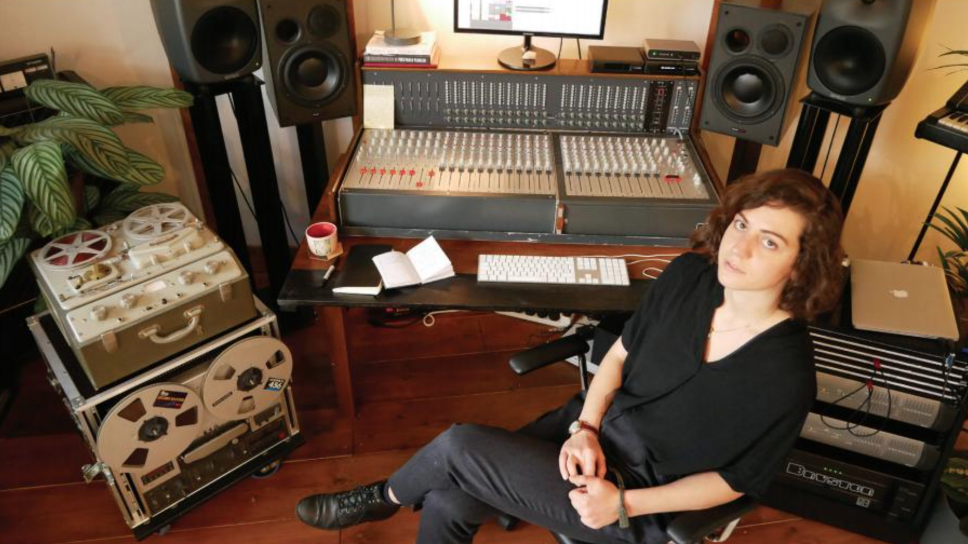 A lot of people are insecure about their setup because they might not have a £3,000 microphone - but you can record perfectly great vocals if the technique behind it is good.

Salogni completed an engineering diploma, but knew that didn’t make her a studio engineer right away; but having that basic knowledge gave her the confidence to be in a studio environment. But there are no rules, she insists, when it comes to creativity:

“I do get this feeling that people feel they are bullied out in this business; they don’t think they can make the best music because they don’t have the best gear, or even know what the best gear is. There are a lot of people who are insecure about their setup because they might not have a £3,000 microphone. But you can record perfectly great vocals if the technique behind it is good. That’s way more important.”

We talk a little about Salogni’s monitoring setup.

“I first met Danton [Supple] at State of the Ark, and became his assistant engineer at Dean Street Studios [in Soho]. I would learn from him, and his way of working through Pro Tools; and once you are working with someone that busy, you need to learn pretty fast.

“So when he wanted a bigger room, we put his Calrec desk and all of his outboard into Studio 4 at Strongroom, with tie lines to the live room. I spent three years there, and we had Genelecs as the mains, with a sub; and NS10s as a secondary pair. So the hybrid system that I have is all because of Studio 4.

“My main monitors needed to be big, and I wanted something I was also going to be fascinated about, such as these Genelecs, which benefit from some amazing technologies. You set up a microphone, and your listening position, and the frequency response of the room, and the software inside of the speakers compensates for any dips or spikes, and makes them as flat as possible, so you have a true listening experience no matter what the space. I thought that
was amazing.

“So when I moved here, I had to get the same speakers to be able to feel at home, and the Genelecs allow me to be confident of what I am hearing coming out of the desk or Pro Tools because I know the sound of the Genelecs, and that they will give me the flat response that I can trust. There is no psycho-acoustic confusion there.”

I ask Salogni how much of a difference it made when Source Distribution came in to calibrate her room.

“A huge difference! I would be sitting here listening to a mix that I know inside out, and I was switching between the Genelecs and my older Dynaudio speakers on the monitor controller; and I would say ‘can we add a little bit of high end in the Genelecs, and bring them down a notch in volume until going between the two felt very balanced?’ Eventually, my expression changed from ‘wow, this is hard work’ to ‘wow, this is amazing!’ It takes confidence to be able to work, and to know this is going to sound great, and the confidence for me to go, ‘this mix is finished’, and send it to the artist, because without that, you can mull over the tiniest details forever. I am now in a great place with my monitoring.” 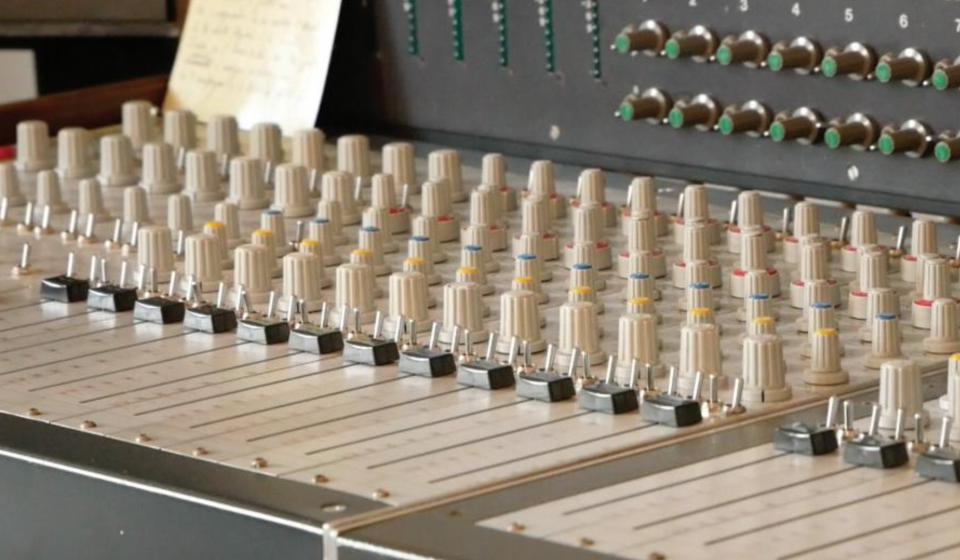 It takes confidence to be able to work, and to know this is going to sound great; I am now in a great place with my monitoring.

There is plenty more cool kit in this space; Salogni’s favourite piece is her Revox PR99 mkII, the first two-track tape recorder she ever laid her hands on.

“When I first started working with Danton, I was really fascinated by tape,” she says. “Obviously I come from a generation of engineers who didn’t really get a chance work on two-inch recordings, because the digital era was already here; and working on tape is not the only way right now.
“People just work with what you have; it’s a decision, not a circumstance. So learning on it was great; and ever since having it, I’ve used it a lot.”

I spy a vibraphone, too, which Salogni loves for its natural, rich sound, and the fact it’s mechanical. She’s a producer in the purest sense, I’m realising, the more and more we chat; and she also loves to ‘create’ with her tape machines.

“I very often use tape to compose - that’s why I’ve got so many! [laughs] I put them all through a small desk that I have, and make them feed back, and bring feedback in and out,” she reveals. Interesting. “I’ve got two of the Akai machines, so I can make a big tape loop between them, and have one in record, and one in playback, so you get a really long delay between the two; and you’ve got sound, on sound, on sound on them, so it doesn’t really fade, it just keeps on going, which is amazing.

“But what I felt I was always missing in these sounds was a natural element, so I started using the vibraphone in those compositions, and realised it changed everything for me, because it’s a pure tone. You can use just one note, and it is so beautiful to my ears. Even if you have multiple feedbacks and tape loops, it can feel quite mechanical; the vibraphone counter balances it, and makes it all feel natural and real. And because the PR99 has got a varispeed, you can change the pitch and the speed, and if you can be careful enough, you can create harmonies of
the vibraphone.”

Salogni plays an example of one of these loops with vibraphone incorporated, and I get exactly what she means. Stunning sonics right there.

“I work on multiple projects at the same time because they cross over, and I prefer it, as it helps me regain focus if I am getting a bit carried away, and spending too long on one little aspect; I find it also helps me clear my ears,” she explains. “Whenever I record on my own with tapes, it’s another way I give myself a break - a mental break, too. Everything comes out of the desk, left and right, so there is no way that I can change the levels afterwards, so I try to work in the opposite way as if I was working normally, so I’m limiting myself to left and right; that’s why I record very long chunks, because instead of being able to change what’s in the recording, I’m just going to edit entire chunks in and out, so if something isn’t there, well, it simply isn’t there... such is life!”

Creating sounds in this manner is particularly fulfilling for Salogni.

“I went to music school as a kid to learn piano, but I can’t consider myself a traditional musician, so it’s always frustrated me that I couldn’t just sit down and play an instrument, because I didn’t know the instrument very well, so I decided to play tape machines instead,” she smiles. “Because I’d learned them, and I wanted them to be known and used as instruments, basically. And they can be instruments: they make noise, and they make sounds, and you can use them in very creative ways. Making your own sounds is a really brilliant feeling.”