Merging Technologies have been around for over 30 years now, and in that time have gained a reputation for excellent audio products. The company moved into Audio over IP (AoIP) with the launch of the Horus AD/DA converter in 2012, a RAVENNA interface with truly transparent conversion and outstanding quality mic preamps. Followed a year later by the HAPI, both units are now AES67 compliant and with audio network management software to route everything where it needs to be, the scene was set for something of a revolution.

In keeping with the gods of ancient Egypt, Anubis was brought back to life in 2019 as a desktop network controller and audio interface in the spirit of its ancestors, originally designed to monitor and route multiple AES67 streams at everything from major sporting events to remote broadcast studios. However could this small professional desktop audio interface soon be worshipped by us mere mortals?

When Anubis first shipped, its software was a one-size-fits-all interface called ‘Monitor Mission’, but with talk of more missions to follow. We at Headliner got hold of an Anubis around two years ago and it immediately became the audio interface of choice for all sessions in our Hertfordshire studio. The interface, I might add, by which all others are judged. Such was the quality of AD/DA together with four outstanding quality mic/line preamps, multiple speaker and sub bass control; it was a no brainer. Though aimed at the serious professional, Merging’s Anubis is actually very competitively priced and represents outstanding value for money.

On May 20, an Anubis firmware update was released which included the brand new ‘Music Mission’, designed specifically with creatives and studios in mind. In other words, it’s now a recording studio as opposed to a post production or mastering suite. Of course this firmware is available to all current Anubis owners at no extra cost, but if you’re looking for a really comprehensive studio console in a small desktop box that you can control via a colour touchscreen, computer or tablet — featuring pristine audio quality and fast latency free workflow — then read on.

The Music Mission effectively becomes the mixing console of your studio, and can include as many peered inputs as you have HAPI or Horus A/D cards, with up to 48 channels. This allows you to control all functions of the additional mic pres with the bonus of a full fourband parametric EQ section, a range of Dynamics with a Gate, Compressor and Limiter as well as an internal reverb engine - a must for putting your vocalist and sax player at ease. 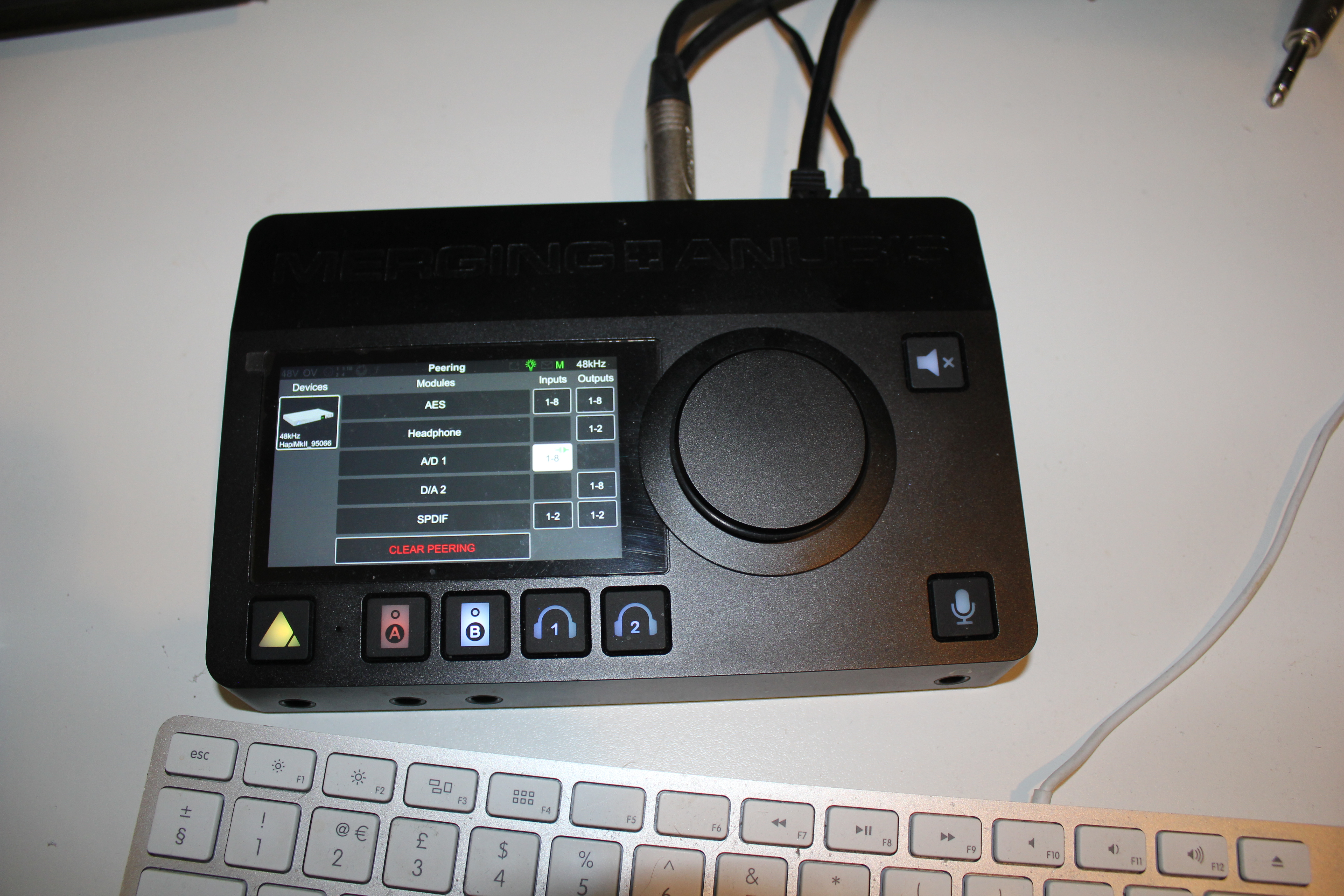 There’s the ability to set up up to five stereo foldback cues (monitor sends) for the musicians. All of which feature additional bus processing of EQ and Dynamics. Plus additional busses for three stereo Aux sends to either plugins in your DAW or via the peered audio interfaces for external hookup to analogue devices. And all at near zero latency. Peering offers you expandability up to 48 channels, giving you the facilities, control and exemplary audio quality of a large format studio mixer in a small desktop interface and a couple of Horus 19” rack units.

It was interesting to note that the peering system still works even without a computer attached, which means you could potentially go do a live gig with the Anubis and a Horus or two, although you’d need a computer or a tablet of some description to help you navigate your way around.

Setting Up The System

On March 8 2021, the HAPI MkII was announced, and I was delighted when Merging offered to send me one so I could get a clearer picture of what my new Anubis Music Mission is all about. I was also interested to find out if everything was as easy to set up as Dante, for example.

Upon glancing around Anubis’s new ‘Music Mission’, I dug out an old Cisco SG300 and swapped a Dante configuration for one from Merging’s website. There was a small issue with security settings using Apple’s M1 chip, but with that resolved, everything fired up and synced up pretty quickly. It was then just a matter of going into Anubis’s menu and selecting Peering.

You can select as many or as few of the available I/O on the HAPI MkII as you want to use. The RAVENNA driver for core audio features two options: You can go down the traditional route and use ANEMAN, Merging’s RAVENNA AES67 network manager, and put virtual connections on a matrix patchbay, similar to Dante Network Manager. Alternatively there’s a handy UNITE button which takes the hassle out of making specific connections, and just works. UNITE essentially demystifies AoIP connectivity and makes the I/O interfacing plain and simple.

WITH THE MUSIC MISSION, THERE’S A WELL DESIGNED AND THOUGHTFUL APPROACH TO TRACKING AND RECORDING.

Running a switch with PoE (Power over Ethernet) means you can do away with the power adapter, handy for keeping your desk cabling to a minimum, or you can use the power adapter as a redundant supply if you’re out on location.

I could have written page after page at this point about all the functions and features of the Anubis. It’s such a clever controller, it’s much easier to tell you what it can’t do, so here I go: It can’t make tea and it can’t raise the dead.

Music Is My First Love

In the words of the John Miles Classic! With the Music Mission, there’s a well designed and thoughtful approach to tracking and recording. Whether you’re a creative individual in a bedroom studio or an engineer in a small modern studio facility, the key to any musical journey is growth and expandability. Merging clearly has a vision when it comes to audio production and the expandability of your system.

At the heart of Anubis HAPI and Horus is class-leading 32-bit AD/DA conversion. Each of Merging’s mic preamps utilise a dual path, dual converter design featuring different gain structures which are DSP combined to increase headroom and reduce the noise floor, achieving a huge dynamic range of 137dB. With all the usual mic pre control including phase reversal, if there’s a better mic pre out there, I’ve not heard it yet! It’s hard to describe just how good the result is at your speakers but if you imagine a sound with natural depth as well as width, even from a DAW like Logic, then you’re getting close. Some of the recordings that have been made in the Headliner studio with Anubis and Reaper have been beautiful. Seems the Reaper and the God of the Dead have more in common than first thought. 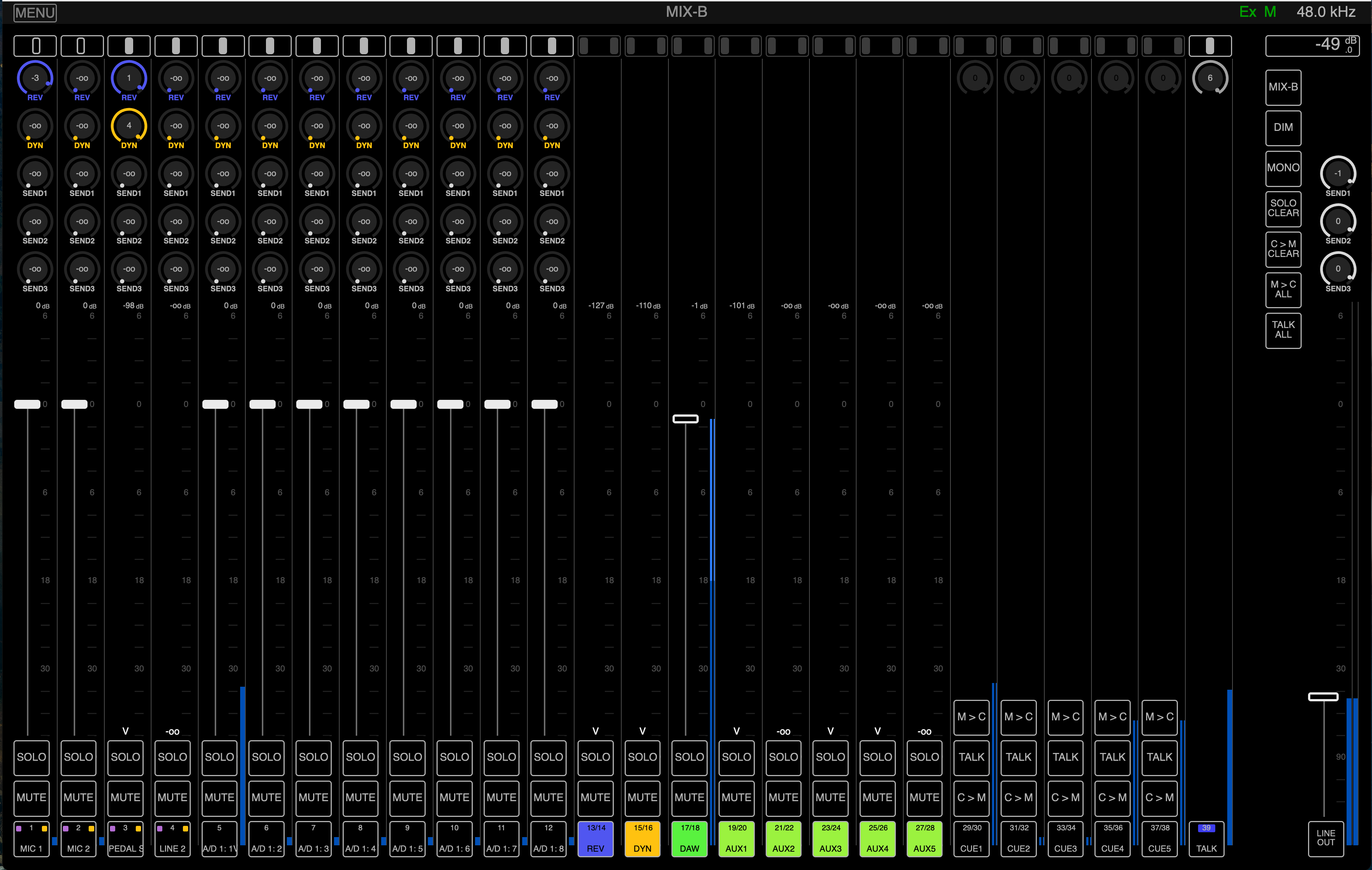 A quick mention to the two headphone outputs on the front, which are by default attached to Cue 1 and Cue 2; these are by far the loudest, sweetest and cleanest sounding headphone amps I have ever heard. Together with programmable crossfade, Anubis also supports MIDI (as does the HAPI) and GPIO functions via its TRS in and out jacks, which in theory means you can transmit MIDI punch-in punch-out commands from a foot switch. Perfect for the current climate where more than ever we’re forced to work in isolation and collaborate via the internet.

I understand there are plans afoot to set up an Anubis Exchange community so people can share their user created presets to help quickly set up particular tasks. This means you could start out with a serious interface, including all the control and expandability you could ever need. And even at around £1500+, it’s unbelievable value for such a great interface.