Merging Technologies has released the Music Mission low latency mixer following an intensive period of beta testing with an international roster of musicians, engineers and producers.

The Music Mission can be downloaded by existing users free of charge, and all new orders will be shipped with both Music and Monitor Missions loaded.

When switching on the unit, choosing the Mission is a press of the touch screen and either loads the monitor controller, or if you select the Music Mission, an up to 48 input/24 output, low latency mixer with multiple effects appears.

The Music Mission includes monitoring features that the manufacturer states are the equal of large scale consoles.

The Anubis Ultra-Low Latency Cue Mixers are designed to act as the perfect tools to put musicians at ease and have them deliver the best performances possible.

Cues can be used when recording, overdubbing, playing live or for independent program distribution.

The size of the mixer depends on the number of AoIP devices on your network but instead of a complex matrix to manage your I/O sources and destinations, the newly developed Peer and Unite features add the additional channels to your mixer with a simple screen tap.

Routing can be easily managed from the Anubis touch screen without the need to be a network technician. Although you initially see the faders and a few buttons, there are full channel strips from top to bottom with local and remote control of preamps, EQ, Dynamics, Reverb, Sends, Auxes and features such as; Pan, Solo, Solo PFL, Mute, Linking, Grouping, Naming and more. 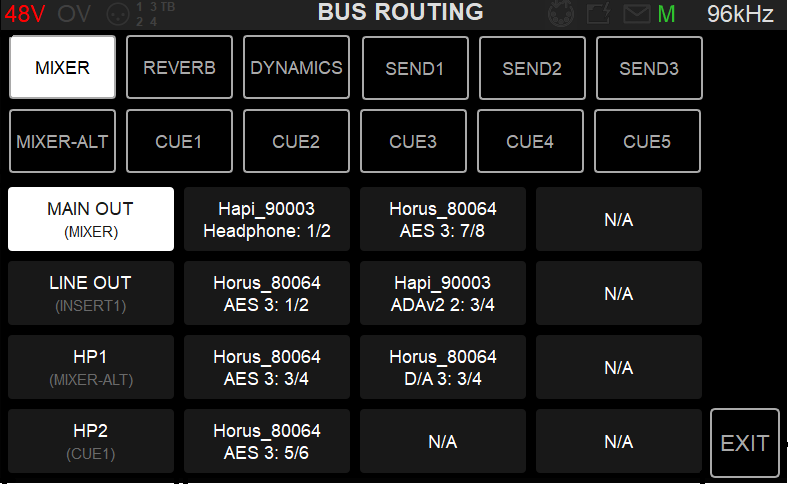 The Music Mission embeds multiple mixers which allows the creation of from one to five different mixes for your performers’ cues or programs. Different input sources or a unique mix balance can be routed to any outputs thanks to the flexible bus routing.

Additionally, there are 18 Snapshots to save and fully recall any of your mixer, masters, songs or setups with the possibility to customise your mixer layouts depending on whether you are in the studio or live on stage. All this can be done without having a DAW connected.

Plus, you don’t need to switch to the Monitor Mission to know what you are doing. The Music Mission provides all the necessary monitoring controls with; Ref, Dim, Mono, Downmix and exclusive monitoring Mutes.

Included free in every Anubis are three high quality effects that can operate at the highest PCM frequencies. These can be applied to your monitoring, recordings or live performance on any Strips, Buses or Returns and recalled at any time on one of the 18 available effects snapshots.

The Anubis Music Mission 4 band EQ is built on the existing Pyramix EQ-X, and offers Extreme Definition filtering at sampling frequencies up to DXD (352.8kHz). EQ can be applied to any inputs (Local or Peered) or to any bus output (e.g. for headphones or room correction). A total of 21 EQ instances are available at any sampling rate. 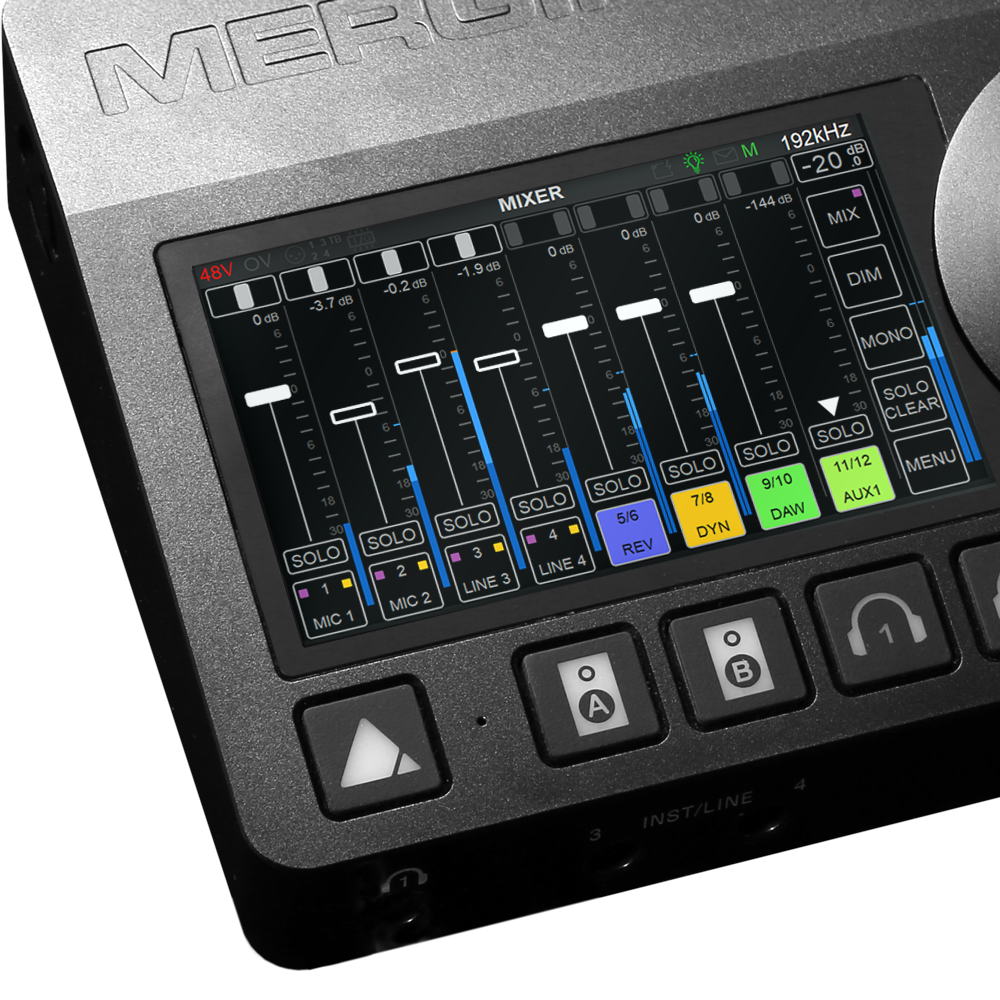 The Anubis Built-in FPGA Dynamics effect includes multi-modules: 1 X Gate, 1 X Compressor and 1 X Limiter, that can be combined in series, with each module having its own parameter values.

Outputs buses or strip channels can be limited or compression applied to your strips, gate the snare or kick, compress and limit the vocals, compress the drums in parallel, and more.

Reverb can be added to the ultra-low latency mixes on vocal, guitars, drums and more, and parameters can be dialled in from a simple user-friendly interface to quickly give the performer a sense of space.

Using low diffusion values will increase the reflexional effect and perform as a delay. Apply effects to the performers’ ultra-low latency cue mixes and give them the perfect listening environment with Equalization, Compression and Reverb on their channel inputs. Those effects can be used in standalone, or can be routed back to a DAW for recording or for loopback processing applications.

Users can also use their favourite external hardware such as a distortion pedal or an analogue hardware EQ, plus the Music Mission has three sends for externals so that you can quickly integrate those into the mixer and apply those effects to any Channel Strip.

Included in all missions are tools that allow the user to Expand, Monitor, Mix and Route any I/O anywhere over a network with quick and simple solutions. What’s even better is that all this can be done from a single Anubis and even be in operation with standalone devices interconnected. 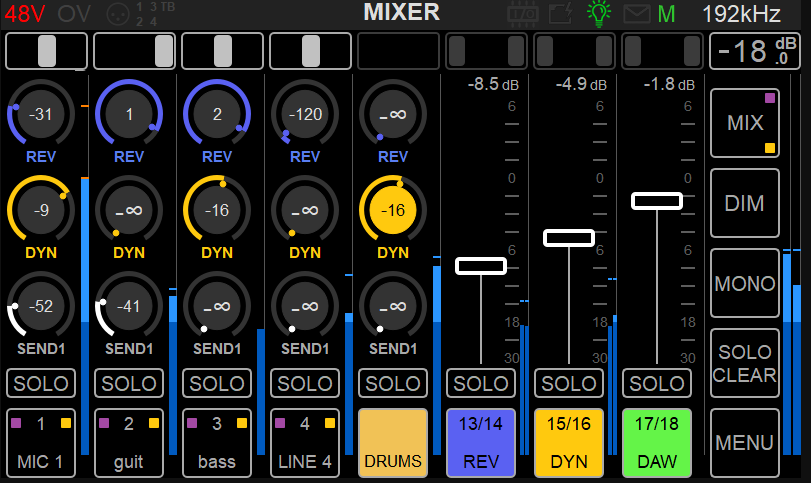 With the Anubis Peering feature, you are a finger tap away from expanding your Anubis I/Os, without the need of any computer to set it up.

Meanwhile, Unite is an automatic AoIP Stream patching feature included in the Merging drivers that allows a user to quickly connect I/O streams between the Anubis and the DAW without the need for any AoIP knowledge or additional applications. With Unite, connect the devices I/O streams and be operational quickly with a click.

The Music Mission is expandable to 48 inputs channels and 24 outputs within the Anubis mixer, when adding AoIP interfaces to your setup.

If the TFT screen on the Anubis is a little small, the web app allows full remote control from a computer or tablet. If you are at a gig and want to adjust the mix from front of house, you can use your phone.

Both missions can be supplied on the Pro or Premium versions of Anubis and also the Pro and Premium versions of the Anubis SPS. The SPS has the added benefit of being able to add extra I/O without the need to add an external network switch, or work in full ST2022-7 redundancy mode for extra safety – a real bonus for location recording and live applications.

“I have been living and breathing this Mission for several months; recording my own music including for the introductory videos and discussing every last feature detail with some of the finest engineers, musicians and reviewers,” commented the Music Mission product manager, Ricardo Ryan.

“The feedback has been exhilarating and we feel confident that the Anubis Music Mission revolutionises the process of recording through to gigging. As we always said; ‘Anubis is one of a kind.’”