The Waves Nx Head Tracker is a small, battery-operated wireless Bluetooth sensor, which is said to transform the whole experience of mixing while wearing cans. In this series, we’re trying to work out whether or not it’s at all feasible to mix a master on headphones while on the go, or in a particularly tricky environment, and I’m hoping this little device will lend me a helping hand as I attempt to mix a track on a bustling train.

Firstly, you can attach the Waves Nx to any set of headphones (I tried this with several pairs before boarding the train, and it’s very easy to do), and it then tracks your head movements, sends information nice and quickly to the Head Tracker plugin, and will track in 360 degrees. To make sure it works properly, you need to attach it to the top centre of your headphones – just make sure you know your left and right!

I’m using the Nx with Reaper – my preferred DAW – and as I bring up the Nx plugin, it automatically sets the Head Tracker as the active tracking sensor. Clever stuff.
I’m sure your results using Nx will depend on your choice of headphones, but the theory is, it essentially replicates a mix room with monitors; and when I pull on my Audio-Technica ATH-M70xs, I quickly get the idea.

Personally, I feel that ‘less is more’ when you’re tweaking your ‘Room Ambience’ setting on the Nx. Much like you would a reverb, you can decide how ‘wet’ you want it to sound, and depending on the level, it’ll offer various virtual reflections, which will impact on your pair of virtual speakers (or handful, if you’re mixing a surround session). 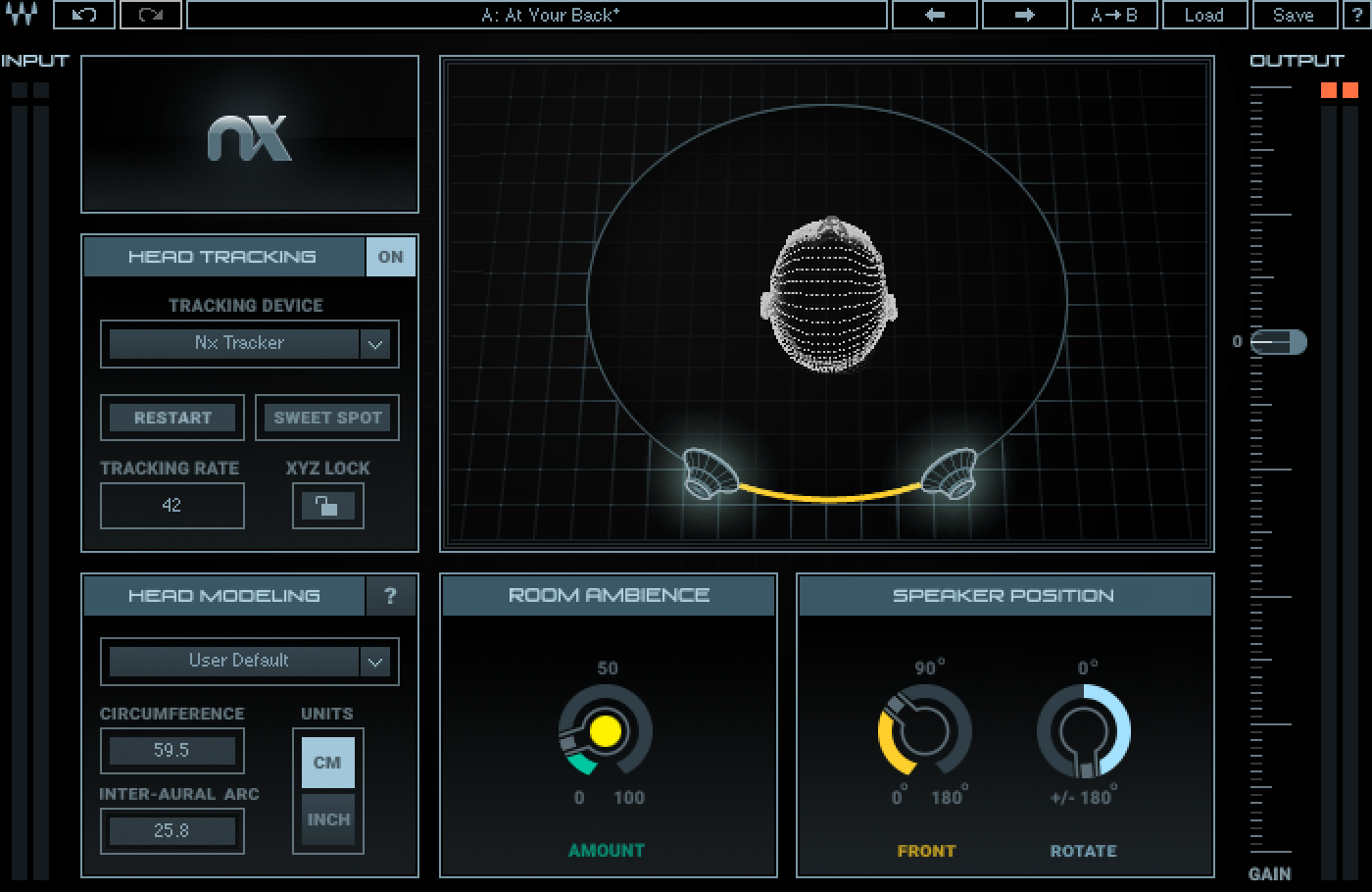 Waves Nx essentially replicates a mix room with monitors; and when I pull on my ATH-M70xs, I quickly get the idea.

When it comes to speaker position, you can have a lot of fun with this little device. It’s remarkably accurate, too; when I move my head left, right, up, down (which people are already finding odd on the train, I notice) I can see Nx tracking my head movements, at almost twice the speed that a camera can manage (Nx allows for camera tracking also, but if you’re on a Mac, you need to move into low light mode to get the right rate, so I stick to no camera).

Two ‘Speaker Position’ dials allow you to widen or narrow your image from mono all the way to 90-degrees each side, and it does genuinely capture that feeling I remember when I used to close my eyes and position my head as central to my old studio monitors as possible some years ago. Hilariously, I find myself sinking into my seat, lowering my head, eyes closed (we’re now passing Doncaster, by the way) as if these virtual speakers are in fact real, and I’m suddenly back in that old barn with my Soundcraft Ghost console in front of me. But I guess that’s the whole idea?

I find my optimal sweet spot (the Nx allows you to set your own, and lock it in), and unlock it again, several times over. I decide I prefer not to be locked in - it just feels ‘spacier’ not being restricted to one mix position, as mad as that might sound, when you consider I’m not in a control room at all..! 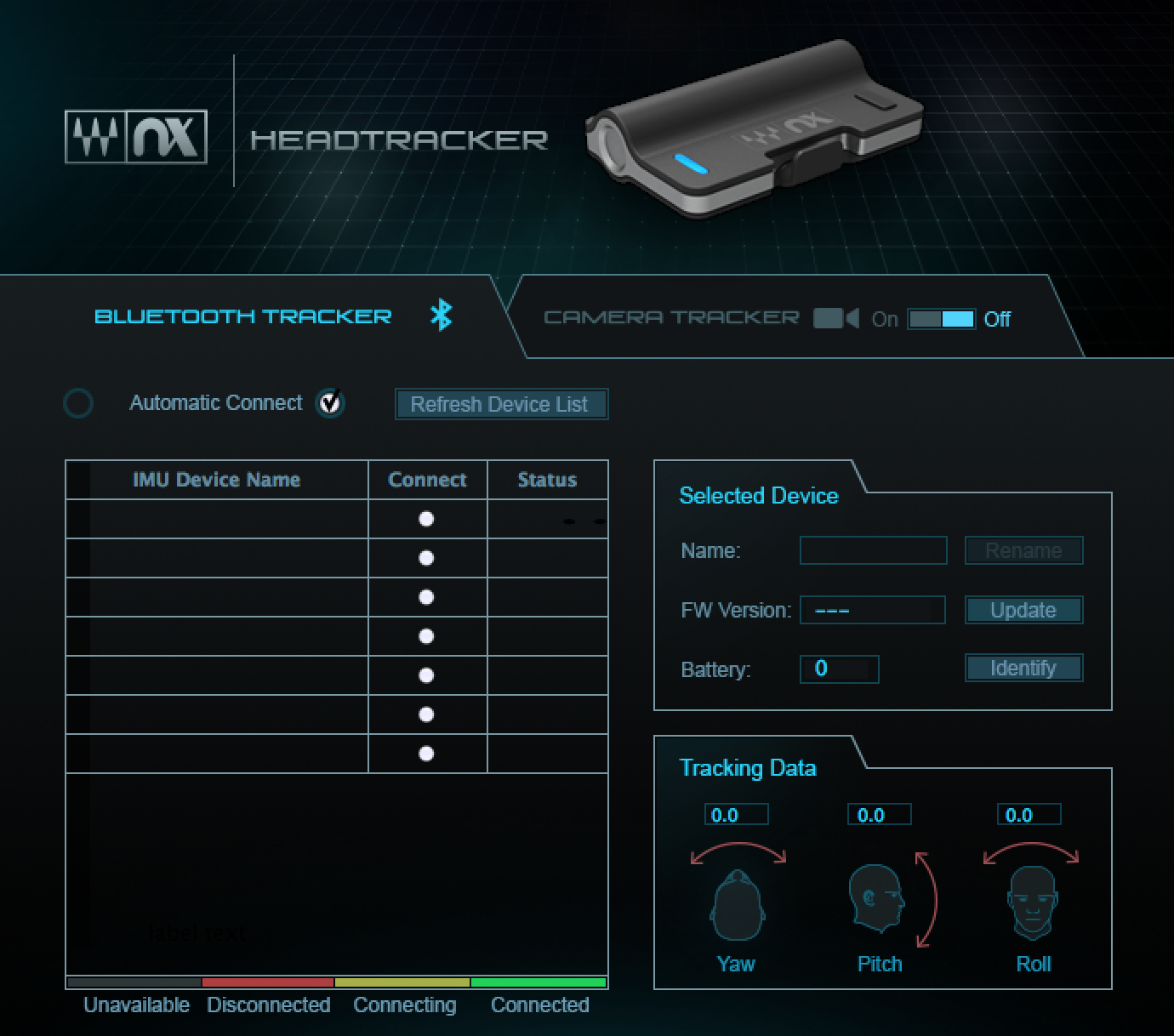 The technology on show here is staggering; at $79, it’s already feeling like a no-brainer.

The mix I am working on is, as in part one in this series, from our recent Headliner Helps show. Last month, it was Mark Sullivan, this time, talented Hertfordshire trio, ARC.

I’ve got two ambient mics that I’ve decided to hard pan L/R, and when I physically turn my head left or right, it freaks me out a little, as the audience voices move with me. It must be insane when working in surround!

The mix perspective default is 60-degrees – one I use regularly - and it feels about right, though I am tempted to go that bit wider, and I find myself starting to play with effects and techniques more than I normally would: panning vocal harmonies 30-40 degrees rather than five to 10. Maybe that’s just because I can?

I guess with something as cool as this, the temptation of going OTT will always be there – I mean, the graphic of the head moving in time with your own almost feels like a video game in itself, so there is a definite fun factor to it, as well. But ultimately, the technology on show here is staggering. And at $79, it’s already feeling like a no-brainer.

I’m approaching Leeds, some two hours into my journey, and I must say there have been barely any distractions on this train. I was concerned about volume, but it really isn’t an issue with these headphones - plenty of headroom, despite having no interface with me - and I’m really getting the hang of Nx.

At the beginning, I found myself hammering every setting under the sun – but as soon as I got used to the ‘feel’, I began using speaker placements that I used to in the old analogue domain; and probably because my old room was pretty ‘dead’ when I had my studio, I didn’t go crazy with the ‘Room Ambience’, just kept it at default, at a few percent, which did add a little life to the sound. You can even rotate the speakers a complete 360 on Nx - something for surround mixing, perhaps?

Something else well worth a mention - I’m mixing using a ‘default’ head size, but if I’d had more time, I’d recommend following Waves’ instructions, and measure the circumference and inter-aural arc of your own head (which I did post-mix) for an even more accurate tracking.

It does makes a difference. However, just by playing with the settings until it ‘feels’ right still does a very good job.

This is a plugin I will happily keep on my mix buss, and keep going back to - half to experiment, half to reference. I don’t know if it’s the right or wrong thing to do, mixing with Nx dialled in the whole time, but after a while, I have to confess I found it more alien when it wasn’t dialled in than when it was. The key is to make sure you know your headphones. The fact I had gotten used to all the sonics and the nuances of my ATH-M70xs over the last month or so really helped me along the way; and Nx genuinely made mixing on these headphones a fun experience.

For me - someone who uses headphones a lot, Nx provided a sense of true space in my mix; and thinking about it, it also freed me up to mix with more feel. I found myself trying new things, playing with new techniques - and tweaking the stereo image, especially in these cans, is very addictive!

So as long as you keep your discipline, the Nx comes highly recommended, and is a very welcome addition to any plugin collection.