Bizarrely, this product could have been made with me in mind. I remember many years ago looking at NUGEN Audio’s very excellent Stereoizer, from which Stereoizer Elements takes its inspiration, if not its algorithms. Again, some time back, I recall being impressed by the equally brilliant Stereoplacer together with Monofilter – a plugin no dance producer, in fact any producer, should be without. At the time, the three were offered together, and I’m pleased to say they still are – as the Focus Bundle.

I have most definitely tried these impressive plugins, including – more recently – their amazing Paragon reverb. I know this because I have a NUGEN account and they offer a really useful ‘try before you buy’ option, which begs the question: why hadn’t I bought any sooner? In my defence, when I first came across Stereoizer 10 years ago I was out on tour a lot more and I wouldn’t have considered spending money on what was then more of a hobby than a profession – a wise investment.

How that has changed over the last year... But if like me, you are conscious of making your investment go further and getting real value for your hard earned cash, read on.

When I was invited to review Stereoizer Elements, I made a couple of calls, just to see how many of my home and small studio-owning friends used imaging plugins, and if so, what it was they used. Surprisingly, there was one who came out with much negativity on the subject. I heard talk of phasing issues, difficulty in setting up, results not worth the time and effort, too expensive for something that works properly, etc. None of this aimed at Stereoizer, I might add.

I’ve got an inkling as to why this particular person clearly wasn’t a fan of this kind of plugin. Most stock plugins for imaging and stereo enhancement or stereo widening are not good. From personal experience, I’ve attempted to get to grips with the two which come with Logic Pro X.

For example, Directional mixer is a slightly over sophisticated pan pot that is very difficult to find a sweet setting that actually preserves the quality and integrity of the original audio while doing its placing. Likewise, Stereo Spread is also not entirely reliable for its described task, and has a tendency to sound suspiciously like a tight reflective room reverb – almost like a standing wave tells you where you are in a space. Either way, nothing with the sort of musicality that makes you glad you didn’t have to part with any hard earned cash. 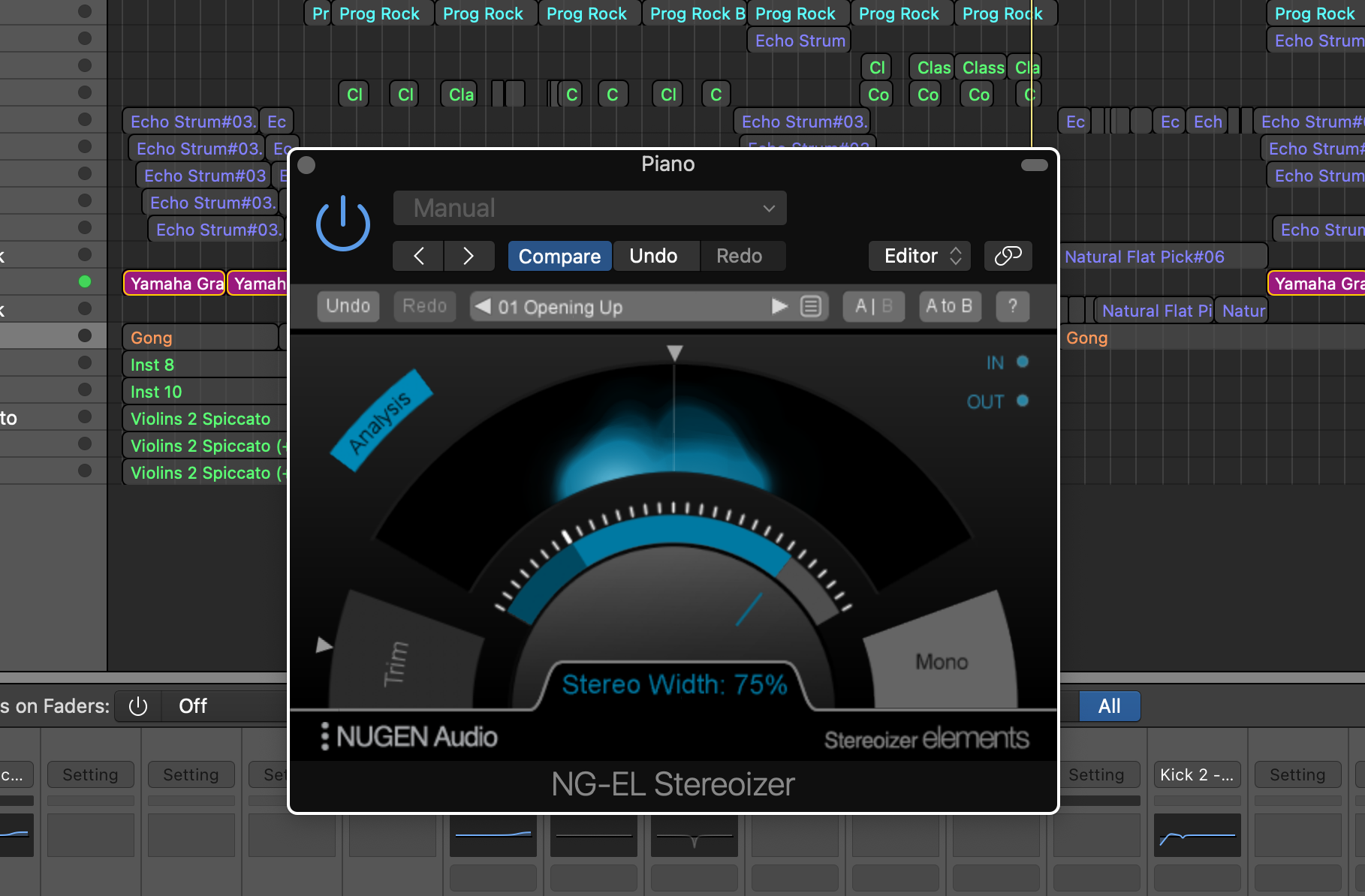 On a positive note, NUGEN Audio’s Focus Bundle did get a huge thumbs up from one mate who uses all three plugins on a regular basis for his cinematic work. He also confirmed the two things that I thought about the original Stereoizer: it was both easy to use and sounded excellent.

Chip Off The Old Block

Stereoizer Elements does exactly what the original Stereoizer does: it increases the stereo spread of mono and stereo signals. The original Stereoizer features three algorithms: Linear width, Interaural Intensity Difference and Interaural Time Difference, plus a number of other movable points on the display to manipulate one, the other, or both algorithms at the same time. The results are a feeling of natural space with no unusual digital artefacts – the result of which could also be seen on a screen which showed the frequency range on the vertical axis and a representation of width/space/time on the horizontal axis. (Although the screen is slightly more akin to a radar scope.)

Stereoizer Elements has managed to remove all the algorithmic controls and replace it with a one metre-style slider that follows the curve of a very similar screen, giving you the same visual representation of the algorithms doing their thing. The widening of the image via this single control is smooth, natural and incredibly musical – it sounds as good as the best of the original. Only now it’s just so incredibly easy to use. To the left is a Trim control that allows you to adjust, as increasing the width by definition will give you the perception of increased level.

To the right is the Mono button, but if you’re like me you’ll simply go to your DAW’s master output bus and click the mono/stereo toggle so you can check that the claims of a completely mono compatible stereo image are indeed true. I know it’s true, but I keep on doing it!

There’s a handy A/B button as well as a preset box and the usual Undo, Redo buttons – depending on your DAW. I had a little chuckle to myself when I saw the 45 available user presets, as with only one real control fader to manipulate I thought it overkill, but if you’re revisiting projects regularly, then maybe.