Return Of The Craic: Sennheiser Dynamics On Test

Last month, 200 comedy lovers piled in (socially distanced, of course) to witness another round of ‘Return of the Craic’ – a regularly sold-out, outdoor comedy event which Headliner has exclusive access to. This time around our A-lister is Irish stand-up, Ed Byrne, with host and warm-up comic, Jarlath Regan kicking off proceedings. And this evening, it’s a Sennheiser/Korg combo running the show. Let’s dive in...

Ed Byrne is set to continue his If I’m Honest tour which was disrupted as a result of the current pandemic from February next year. As he treats us to a taste of his one man show he says: “While I wouldn’t normally play a shithole like this, I’m just pleased to be out of the house!” A line which prompted the first bout of much needed hysterical laughter.

A line made even funnier by this venue’s classy aesthetic: The Plough is an idyllic space, boasts a great little stage, an amazing woody campfire aroma, fabulous food, and a wine cellar stocked with some of the finest wines in all Christendom.

A feature of all of the Return of the Craic events so far has been the regular wet and windy weather but our robust compact sound system has had no problem making sure every word and those all important punchlines have been clearly and consistently delivered. As with all previous events at The Plough, the core sound system remains the same featuring coaxial dB Technologies LVX XM15s which don’t seem to mind being rained on; and the very compact and fully- featured Korg Soundlink MW-1608 console.

This is such a reliable and transparent little system; it requires very little EQ, and can be set up from car boot to show in under an hour. Readers of Headliner’s new Spotlight Journal publication will know that I recently had a look at and reviewed Sennheiser’s brand new MD 435 and MD 445 dynamic microphones; and with live events being particularly thin on the ground (and with this event giving me free reign on equipment selection), what better opportunity than to use them in one of the vocally harshest environments available?

Comedians often use mic technique to emphasise points, or to create a particular voice or character - and when making use of the proximity effect and coming in close, it’s not unusual for some dynamics to break up or distort. Sometimes it’s down to the correct gain structure, other times it could be the capsule’s inability to cope with the high SPL.

Again, sometimes this is caused by the mic being cupped, and there being nowhere for the air to move over the diaphragm and through the capsule; sometimes it’s a combination of both. These possibilities are reduced in these two Sennheiser mics by their ability to cope with SPLs of up to 163dB, their incredible off-axis rejection - even more noticeable in the MD 445, which forces the performer to stay on the mic allowing for far easier gain setting.

These make for a couple of pretty high-end, abuse-proof microphones. The next point I couldn’t possibly overlook and probably the first thing I noticed when I started reviewing them is the large diaphragm format, and just how good these mics sound.

If you’re in the market for a high end vocal mic then I strongly urge you to give these a try. Rick Dickerson

The detail and transparency is more reminiscent of a quality condenser than a dynamic, and while it might not have quite the sparkle of a condenser, it also isn’t picking up all those off-axis high frequencies that condensers are famous for.

It does, however, pick up plenty of sparkle from the voice that’s just in front of its large diaphragm. I was really pleased that I finally had the opportunity to sit back and really listen to these mics and get a clearer picture of what they’re all about - in a real live setting.

When it came to the show, I hadn’t actually planned for any one person to use any particular mic as there had been no soundcheck, only that whichever mic they went to first would be their mic for the entire night, as under current conditions (for obvious reasons) there would be no mic sharing.

I just used the same gain for each from my previous experience of the review and testing, left them flat but with high pass, colour-coded them, cleaned and disinfected them; and left both on stands either side of the small stage.

Jarleth had his own radio [mic] which I’d used on previous occasions and that he kept with him, and was open at all times so he just had to mute and unmute himself. The warm-up act, Iain Stirling, was first up, and just picked the mic nearest to him and moved it to the centre; this turned out to be the MD 435. After he had performed, I disinfected the MD 435 and put it away so Ed Byrne ended up with the MD 445.

The stage was small, and tables were spaced through 180-degrees, so to keep clear sight lines the speakers were to the back and side of the stage which meant that during previous shows there had been the odd close call as someone had strayed just a tad too close to a speaker and a little fader tweak had been required.

This week, however, I could relax; while it was loud enough to hear clearly all over the site, there was not a hint of impending feedback - even when Ed walked over to the side and started to pick people out, waving the mic like he was trying to amplify their answers... Nothing! Just clean, controlled and crystal clear audio.

I almost forgot that Ed was being amplified through a PA - and I suppose that’s the ultimate test, isn’t it? If you’re not aware there’s a PA system, then it’s a good PA system. I love my work - and don’t really consider it work, as such - but it’s very rare that I sit back and actually forget I’m working. I did on this occasion. 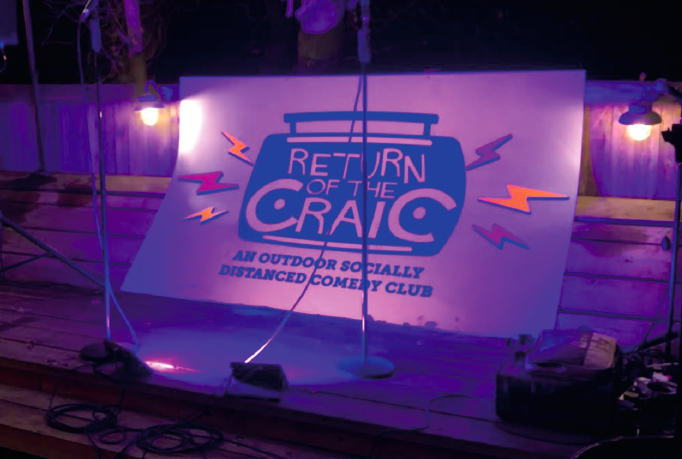