Could the Softube Console 1 and Fader 1 combo be the perfect solution for an in the box studio setup that craves analogue flavour and hands-on workflow?

I started out working on entry-level analogue consoles when I was in my mid-20s. My first board was a Soundcraft Spirit 24:4:2, which taught me some basics; and after upgrading to the manufacturer’s Ghost console some 18 months later, I started to really study gain structure and the workings of a parametric EQ.

I built up a knowledge of each part of the channel strip and, hooked up to an AKAI DR16 and DR8 with a SCSI drive (to achieve 24 digital tracks) and a couple of Drawmer gates, an Alesis Midiverb 4, a Lexicon MPX100 and a Focusrite Voicemaster Pro preamp, I started to learn how to mix.

Fast forward about 15 years, and my studio no longer looks like that: I now have a fully-calibrated Genelec room with Merging Technologies A-D conversion, some nice keyboards and VIs, and an abundance of plugins. It’s chalk and cheese, really. The superior kit, and accruing thousands of studio hours, changed the game. No doubt. But there is one thing that I constantly miss: hands-on mixing. Faders and knobs. ‘Feeling’ how you’re driving a channel, compressing a snare or kick, or finding a rogue frequency.

It’s that tactile element that I have always craved. And I’ve not been able to scratch that itch since my analogue days – but that might be about to change. Softube launched Console 1 in 2014: a hardware controller that conrols the Console 1 plugin, an official emulation of the SSL 4000E console, with some additional Softube saturation controls thrown in for good measure.

There are other console emulations available: SSL K Series and ‘British Class A’ are two examples, but we’re sticking to the 4000E for this review. Console Fader 1 reared its head much more recently – in January 2020. It’s a control surface for the Console 1 plugin, and adds further mixing flexibility when used in tandem with the Console 1 hardware.

Both are powered by USB, though Console Fader 1 also requires its own PSU, as there are 10 fader motors to power. But the big question is, how easy is it to implement this setup into an in the box studio environment like mine?

First of all, these two pieces of hardware are built like tanks. They are weighty, the knobs and faders are beautifully made, and everything ‘feels’ authentic – and expensive. The way I want to approach this review, considering I’ve never used either unit, is one at a time, starting with Console 1 - I’ve not read any manual, I’m just heading straight in.

The reason for this is that my studio workflow is already really quick and for me to even consider making a change, this has to blow my mind quickly, and get me excited. After downloading Softube Central, I quickly authorise the product and open up Reaper, my preferred DAW.

Softube recommends inserting an instance of Console 1 on each channel in your project to get the full benefit – in the same way you might insert your favourite EQ plugin across your entire mix project - so that’s what I do. Suddenly, the Console 1 comes to life. LEDs sparkle, and it’s talking to Reaper right away. Great. 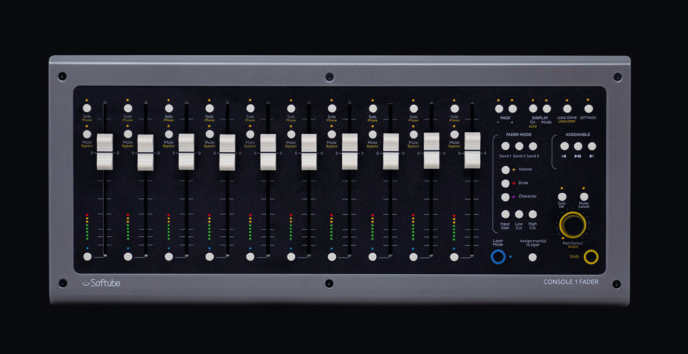 I scroll through the display options via the mode button at the top left of the unit. There are several modes – all of which look super sleek, and are apparently extremely responsive and pinpoint accurate. Fingers crossed.

The two main displays are graphic- and rotary-based respectively, and show all five sections of the Console 1 channel strip, as follows: Input section, complete with input gain, low cut, and high cut; Shape section, comprising a gate, as well as Softube’s own Sustain and Punch controls; Equalizer; Compressor; and Output section, incorporating some saturation controls, giving you the ability to send Drive and Character to the signal chain.

Talking of chains, there is also an ‘Order’ button which allows you to move the chain: Shape (S) > EQ > Compressor (C) is standard; but you can also go EQ > S > C, or S > C > EQ at the push of a button, which is a pretty neat feature. Next to ‘Order’ is an external side-chain which can be applied to Shape or Compressor. If you don’t want to see the full GUI, you can move to one of two meter bridge displays which work very effectively, and allow you to rely solely on your ears. How novel in today’s modern studio workflow!

I haven’t pressed play yet, but I’ve got my head around most of the controls, and I’m about to find out if this thing is as intuitive as I have a feeling it might be.

First, I decide to remove all other plugin instances from the project, and resave it as a Console 1 version, resetting all faders to zero. The song I am going to be working on is How Slow I Let You Go which I engineered and produced for Michael Fox - an emerging London-based singer-songwriter – at Headliner’s studio. It’s an easy on the ear, acoustic guitar- led waltzy number with some liquid Telecaster overdubs which we tracked through a Vox Nutube MVX150H into a Strymon Big Sky.

An Austrian Audio OC818 was used on vocals – and there are plenty of them – with a few Spitfire Audio strings toward the end, and a tremolo-laiden Rhodes provides a kind of underbelly to the whole track.

Turning the drive pot feels like you're driving a channel – and you can drive the hell out of it! Paul Watson

I begin by selecting track one from the ‘Select Track’ strip that runs horizontal on the centre of the Console 1 unit. The whole project is only 16 tracks in size, and Console 1 works in banks of 20, so we won’t have to do much navigating at all. However, it can accommodate as many tracks and banks as your computer’s CPU will allow.

I then notice the solo and mute buttons by the volume rotary in the bottom right of the unit, and toggle both. Sure enough, it solos and mutes as directed. I’m impressed already that the comms between unit and DAW are so seamless. Starting at the Input section, I plan working left to right on all of the instruments, to get a feel for the Console 1 hardware.

The acoustic guitar in isolation – also recorded with an Austrian Audio OC818 – sounds pretty good as is, but being a classical guitar, there are a few too many mid tones, and it’s a touch wooly at the bottom. I reach for the Input Gain pot, increase the gain a little, just to see how it reacts (it’s very responsive) and then make a low cut at around 60Hz – sorted.

My word, did it feel good doing that with a rotary fader rather than a mouse! I don’t need to gate the guitar, of course, but as I move to the Shape section, I’m keen to see what Sustain and Punch do. Sustain offers just what it says on the tin, and I find myself settling on a +1dB boost which, with +1dB of Punch, seems to make the instrument way more present sounding. Nice. Now onto the EQ. Now, because I am used to the SSL 4000E channel strip in plugin form, this (I hope) will be the real litmus test for me.

I decide to try and operate this without the main GUI display, then I’ll go back to it and see what I actually added and cut afterwards. So, using only my ears as reference (and a very occasional check as to where the LED indicators that circle the rotaries are sitting – by my estimation, they go up or down in roughly 2dB increments) I spend a minute or two playing with the EQ, and I have to say, I find it insanely responsive as well as immensely satisfying.

The levels that Softube (no doubt in cahoots with SSL’s team of engineers) has gone to in delivering not only something sonically outstanding but that is as responsive to the touch as an anlogue board is nothing short of staggering. When I’m happy with the guitar, I move onto vocals, and this is where I feel Console 1 comes into its own.

I’ve not been fortunate enough to mix on an SSL 4000E, but I have worked on some similar large-format boards, and I do know roughly what a +3dB should ‘feel’ like on a rotary, and likewise where 10kHz should be when adding air to an instrument. And I have to say it feels wholly authentic. I find it not only remarkably accurate and natural, but somehow it feels like I’ve always been using this hardware.

That sounds mad, as I’m less than half an hour in - perhaps it’s just satisfying that craving for analogue workflow? But, as I push a few more dB in, I realise that there could be more to it than that: I swear I notice a ‘sound’ – Console 1 sounds like an actual console, not a controller. I move onto the compressor, and it underlines what I just said about the EQ – perhaps moreso.

I love compression, and physically dialling it in is my first eureka moment. As I take the vocal out of isolation, and bring back the guitar, I already feel that I am getting better results using only Console 1 than my regular plugin chain. But I’m keen not to get too carried away at this stage! What I should also point out is that set into the hardware on both the Compressor and Shape sections, there is an LED strip indicating how much gain reduction is happening – another fantastically ‘real’ feature, which I think encourages you to be bolder with your decision making.

Or at least that’s what it’s doing for me. Finally – the output section, with Softube’s very own saturation in the way of Drive and Character. Turning the Drive pot genuinely feels like you’re driving a channel – and you can drive the hell out of it. And Character brings out this kind of ‘air’: the further clockwise you go, the more air you get; and go anti- clockwise for a warmer tone. Both are great tools, and further indicate that Console 1 does indeed have its own ‘sound’. This is madness.