I’ve used a number of Spitfire Libraries – many of them strings-based - where I’ve either orchestrated a piece of music for screen, or used them to add texture or colour to a project that I’m producing in the studio with an artist. What I’ve never done, until now, is attempt to compose an original piece of music from scratch in half an hour using one library that I’ve never used before. But reviews need to be fun, so let’s dig into Spitfire’s brand new Darkstar Haunted House, and see what it’s all about.

First off, Dark Star Haunted House looks mean – and it has a cool story behind it. This sample library is centred around well respected electronic music duo, Darkstar, whose label, Warp Records, is a revered British indie responsible for a roster of IDM (Intelligent Dance Music) talent. The collaboration expands upon Darkstar’s latest album, Civic Jams, and according to Spitfire, it’s a culmination of tense, atmospheric contemporary electronic music using the magic of analogue synths, sub- bass, manipulated drums, and icy vocals.

And at £29, what’s not to love? It’s great not having to head in to Kontakt anymore when installing this kind of stuff; Spitfire’s bespoke plugin – first seen on its excellent LABS series of free VIs, which continue to evolve monthly – is fantastic, and I’ve got the library up and running as an AUi instrument very quickly indeed.

The dropdown menu lists plenty of synths as well as a rhythm section of lo-fi drum sounds, a ton of voices, some ‘Found Sounds’ which were captured across London, plenty of ghostly bits and pieces, and much more. Within each section, there are of course a multitude of options, all of which can be manipulated within the Spitfire plugin: Attack, Release, Reverb, Delay, and a Flanger.

It’s obvious you can go very deep with this mean machine, but such is the nature of a Spotlight review, I will cut to the chase and see what we can get out of it quickly. After hitting a few notes on the keyboard and walking myself very quickly through the menus, I get an immediate sense that it’s not just the sounds themselves that have been captured here, it’s the quality of processing that is so standout: immense care, as well as an abundance of time and energy has gone into putting this library together.

You won’t have to do too much if anything at all to these sounds once you’ve laid them down. Which suits me just fine for this experiment! I begin on RVVM – the rhythm section. Before I load up the full drum kit, I notice there are some cool ‘ready to go’ loops which I will no doubt come back to shortly.

The lo-fi drum sounds are quite simply fantastic – and after playing around with the decay on my kick and snare, and discovering the delay (which I instantly love), I’m quickly putting down a very simple 16- bar sequence.

It’s key that I commit quickly here or nothing will get done, so I only briefly go back to the kick once it’s tracked and fatten it using the controls within the plugin. Now onto voices. I love ‘Lost Dubs 1’ – beautifully recorded, but creepy as hell!

I play out a melody in what I believe to be D minor, though such is the wobble on this icy vocal, it makes me question my playing. Thankfully, it’s the processing effect and nature of the beast, so to speak. I track a two-part, 10-note vocal pattern which sits under my kick and snare, and I begin searching for a pad sound to sit underneath that.

I’ve created something a little on the scary side, but that hopefully won’t give you (or me) too many nightmares on playback.

But as is so often the way, I stumble across something nothing like a pad, yet feel I have to use it. It’s one of Darkstar’s Found Sounds, ‘Haze Boo’, which probably explains why it’s so unique – an anxiety-inducing industrial noise with an ethereal effect, like a ramping up of energy...And in it goes.

As I continue to seek out pad/chord- type options, I discover Lost Dubs 2 (which gets more aggressive the longer you hold it down), and XTC Mantra which I really like. I then discover something utterly stunning: Ghost Glue 3, which is outstandingly processed and provides a huge stereo image. It isn’t quite fitting into my pattern but I make a note about returning to this library for this sound alone, such is its quality and potential.

As I open up the ‘Warpd’ sounds, I soon find the perfect sonic element for what I need: Esso AM 2. A human voice with a chilling twist, which will provide the answering phrase to my melody line, while adding that extra colour I was after. As predicted, I end up going back to the RVVM section to play with the preset drum loops.

There are three options as such: one very lo-fi which is kind of a break beat; the second has more groove; and the third is a straight-up driven beat - but again, with a twist. I settle on the latter; and after a quick tweak of the Spitfire plugin’s dynamic controls, I overdub the new loop across my track.

I also pan the original kick and snare at about 30% respectively, so they sit either side of the soundscape; that’s somewhat unusual, particularly for me, but this track is certainly unusual sounding, so I just go with it! I also find myself drawn back to one of my other recent discoveries: XTC Mantra, as I need a delicate texture. 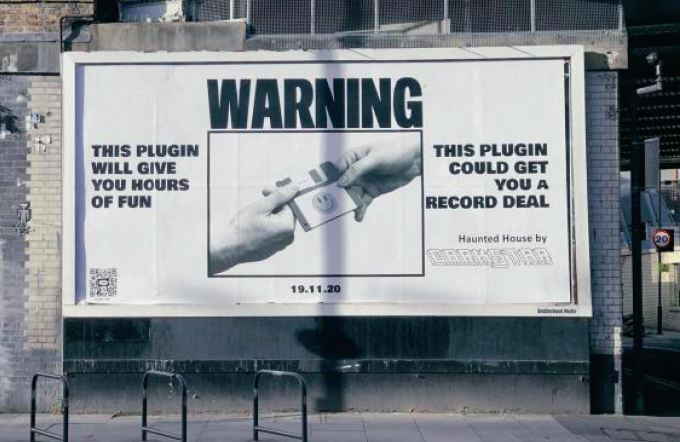 Playing around with the Attack and Release settings works a treat, and adds air to the sound quickly and effectively. I then track it. I also start playing with the WARPD Acid Boo sound which is frankly terrifying the more I attempt to manipulate it.

It’s as though the spirit world is warning me off using this, so I leave it out (just in case...) The one thing missing from my loop is bass – and I know we have many options in this library in that department. I quickly settle on Mass Bass 1 which is great as it is, and I find myself dropping in a simple bassline on the off beat moving from D to C.

It brings a little order to the ghostly chaos I seem to be creating, and actually works great with the harder hitting drum loop I dropped in. It’s also given the track a kind of trippy house vibe. That’s an area of music I’m not au fait with, and would never attempt to create. But there it is – and I kind of like it. With a library like this, sounds can take you elsewhere - and in this case, they lean on you to make decisions quickly. I quantise the bass in Reaper, and move on.

I need to reiterate once again the quality of the processing within this library – because when I’m putting stuff together creatively, I normally have my channel strip dialled in on every channel, and I’m adding compression, FX, and all sorts as I go.

Here, not only am I not doing that (for the purpose of this review), but I’m also not missing it. Everything is sitting together very nicely – and I’m still able to mix as I go without any of my go-to tools. Of course this will mean when I do add them at perhaps a later date, the sounds will be even more mindblowing. Ultimately, the audio capture and processing is flawless.