Sound recordist, Tom Curley, started out as a production assistant on the 2002 movie, The Time Machine, and 13 years later, landed himself an Oscar for Best Sound Mixing for the 2015 hit movie, Whiplash. We ask him about his musical story, those magic moments, and go-to kit.

“I remember having loved movies as far back as my memory takes me; I never thought it was something anyone could be involved in until I found a filmmaking club in my high school,” Curley recalls. “After having a blast

in this club, I decided to go to film school, graduating from the University of Buffalo, where I learned film history, theory, screenwriting, production, made my own films, and also worked as a set PA on a few professional films.”

After graduating, he continued to look for a career in filmmaking, something that he could passionately dedicate decades of his life to - and in 2001, he got his first big break.

“I was working on Dreamworks’ The Time Machine, where I met sound mixer, David MacMillan, and boom operator, Duke Marsh. They mentored me on that set, and I felt like I had found a craft that fitted all of my skills and goals,” Curley reveals. “I then began learning more about production sound mixing, and saving to move to LA. One year later, I would be mixing my first feature, Roger Corman’s Demon Slayer.”

In a nutshell, Curley records dialogue and other sounds on the sets of motion pictures and TV shows; he’ll bringing portable, top quality audio kit to film sets, and manage a small crew of technicians to get the best sound he can out of each shoot. At the end of the day, these get handed in, and the editors and post-production techs fine-tune everything into a finished product.

“At the moment, I am recovering from four months of filming season two of the Paramount Network series, Yellowstone,” Curley smiles. “It has been a very impressive and demanding job for all involved, but it has proven to be a hit, and deservedly so. The scope and size of the show makes for great entertainment, but the crew are working in the rugged outdoors of Utah and Montana, day and night, often in rain, snow, and wind, which can get exhausting. Since the end of the year is usually quiet for production work, I have taken December off, and will begin pursuing new projects in January.

“As a freelance operator, the saying goes: feast or famine. You never quite know which one is headed your way! Sometimes I get multiple calls a day, sometimes I can’t buy a job. The great thing about the Los Angeles sound mixer community, however, is that we all tend to help each other out. When I have too many jobs coming my way, I have trusted colleagues I can refer to the client. When I am looking for work, I can call on some of them who are flush at that moment.”

I ask Curley what his go-to audio kit is when on location.

“While there is plenty of debate in the sound community about wireless use, we all use it, and often have no choice but to rely on it to get the sound we need,” he says. “I understood this coming up, and knew that you get what you pay for. I have had experiences with poor quality wireless, and it can turn an otherwise straightforward job into a nightmare, quickly. Even the best wireless gear isn’t infallible, so it’s worth it to get the best you can afford. It is here that Lectrosonics comes into view.” 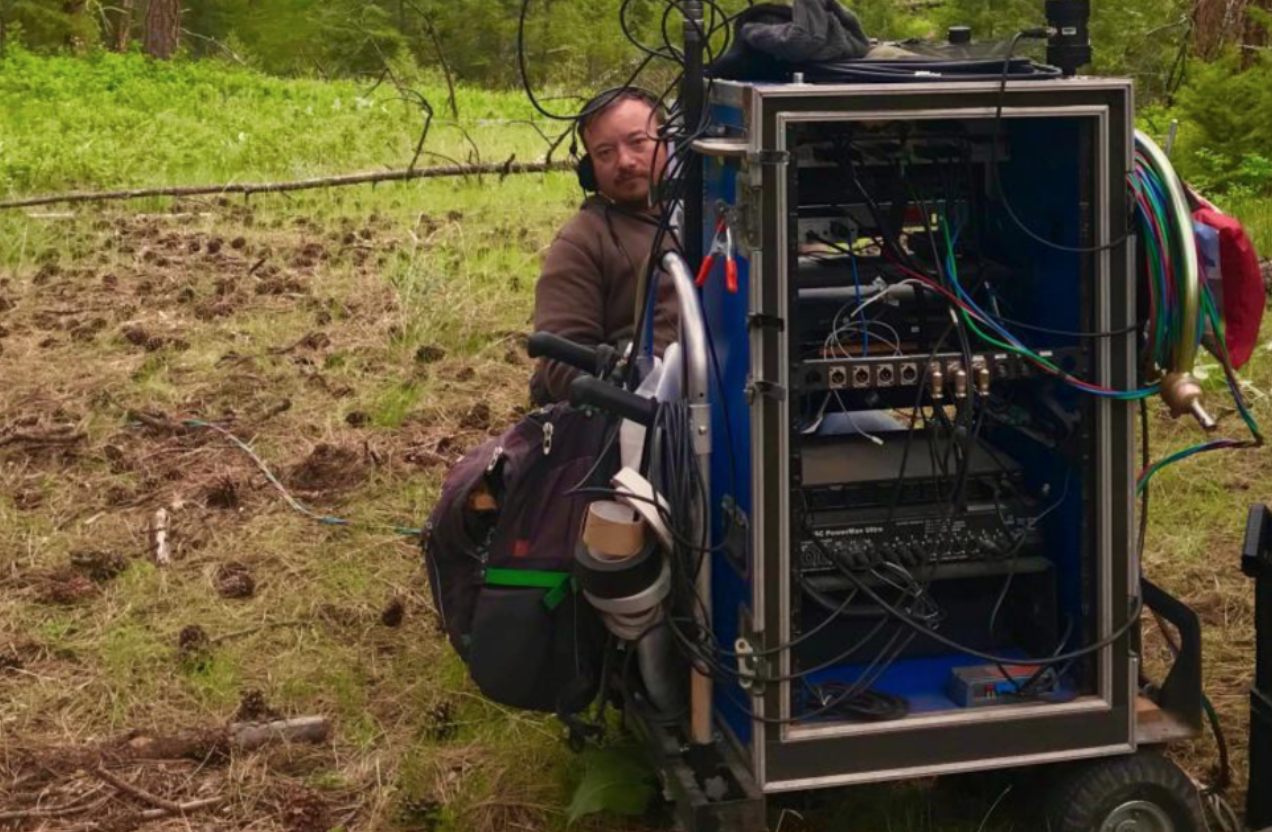 On the film A.X.L., I used a Lectrosonics PDR on a dirt bike rider who was travelling up and down a mountain course, being followed by a drone.

“They were frequently seen on the film sets I did PA work on, and that generally meant the kit was pro level,” he recalls. “When it came time to spend my own money on kit, I had a few options, but Lectrosonics not only has an incredible track record, but also helped project the professional image I wanted clients to have of me as a mixer. As my career has progressed, I have tried different brands here and there, and at the top of the line, they are all good, but I didn’t want to have a scattered bunch of kit, as it’s easier to integrate everything in a logical, neat way.”

Curley started out with two Lectrosonics 211 systems, growing to four, which lived in a rack mount antenna combiner on his cart, or loose in a bag with whip antennae.

“These worked well for the gigs I was getting, and while I rented 411 systems, when they came out, I didn’t buy any, as my analogues were working well, and were reliable. When the SM series came out, I began adding them to my kit, along with the dual slot receivers, allowing me to work in a mobile rig, or on a cart, with more channels in less space. At the height of this, I had four dual slot receivers in the Lectrosonics Octopack, giving me eight channels working off of two antennae.”

More of Curley’s jobs were at this point asking for more and more tracks, and with the advent of 12-track field recorders, he then moved to using two Venue receiver units, with a total of 12 SM transmitters.

“I really like the advancements they have made with these, especially the remote control features,” he says. “I have kept my dual slot receivers to use for bag work, and more remote or light duty shoots. The Lectrosonics PDR has been a great solution for times where a body mic or plant is needed in a situation where the wireless just cannot deliver. For instance, on the film A.X.L., released last Summer, I used a PDR on a dirt bike rider who was travelling up and down a mountain course, being followed by a drone. There was no way to get a sound cart or antenna anywhere near them, so the PDR came in, and performed beautifully! It uses the same timecode as my recorder, so I just take the files off the micro SD card.”

I ask Curley what the biggest challenges are when capturing audio on these huge productions, and how he overcomes them.

“As the size of the crew and set increases, the ability to make quick changes becomes more difficult,” he admits. “If we need to move all of the equipment trucks half a mile away from the set, we will need to predict the future a bit for some things. Will we need to bring rugs, or pop up tents? Will we be riding on a 4x4 gator into the mountains? Will we be on a riverbank, or in a boat?

“The options the show has at its disposal means that we need to communicate more, and also do a bit of mind reading, to make sure we have everything we need. The best assets I have in this regard are my crew. They are often the eyes and ears! One thing I have done is built two carts: one small and nimble, with less tracks and less weight; the other with more tracks, that can handle bigger scenes, but it’s larger and heavier.”

And finally, what is the most satisfying part of his job?

“I think knowing how much of an impact sound can have on the emotional impact of a story, and that I can contribute to so many people enjoying their entertainment like I have,” Curley reflects. “The other satisfying part for me is the unique access to people, and little random spots in the world, that most people don’t get.”