Tony Visconti is one of the world’s most revered record producers. Most famous, of course,
for his extraordinary work with David Bowie and Marc Bolan. He and Bolan used to experiment with sounds together in their early days, when working with Malcolm Toft; both were equally fascinated in pushing musical boundaries, and working out how to manipulate sounds. It clearly worked. Any T. Rex record sounds as current today as it did back then. Remarkable.

Today, Tony Visconti is as busy as ever: he’s been making records with Damon Albarn and The Damned, to name a few; and he even delved into the world of hip hop with St Louis-based act, iLLPHONiCS, who he met when they opened for Kristeen Young, another super-talented artist who he’s been championing for some time. But how much has life in the studio changed since his time working with legends like Bowie and Bolan?

“It’s exactly the same,” he smiles. “When I worked with The Damned recently on their last album, I went to London to meet them, and talk about what they wanted to achieve from the record; and then we went to a studio in Brooklyn, and I had all my notes with me from our original chat in London. I tend to remind artists in the middle of the project what their goals were, because they often forget – I forget too, of course! [smiles]”

Visconti is a big believer in preparing for sessions, and thinks that everyone should do so, rather than dive in head first, so to speak.

“People beginning to make records should always consider how important it is to do pre-production; what artists like about me is that I can coach them, and I can teach them how to sing better,” he says. “Young producers now tend to think, ‘well I’ll get 30 takes out of them, I’ll make a playlist, i’ll hack it up, frankenstein the vocal, and make it sound perfect by putting it through Auto-Tune.’

“But you can hear that records are too perfect today, and they’re not interesting by virtue of being too perfect. You only look at a diamond once! [laughs] But it’s the flawed ones that are the more interesting ones. Bowie and I together always kept those so called ‘mistakes’, because that’s the gold.”

“I use Pro Tools 90% of the time, and I always upgrade, even though they sometimes crash, but Ultimate is the most stable Pro Tools ever, and I love it,” Visconti explains. “The thing about the digital world, though, is that it’s outdated every two years, and that is just a sin against nature; in analogue, if you have a Fairchild, it still works! Anyway, I try to keep up to date on plugins, but try not to rely too heavily on them, as there is always another way of doing it. I’ll just remember what I like about it. It is disheartening, though, if I open up a Bowie track from 2003 that I mixed, and half of the plugins are now redundant.” 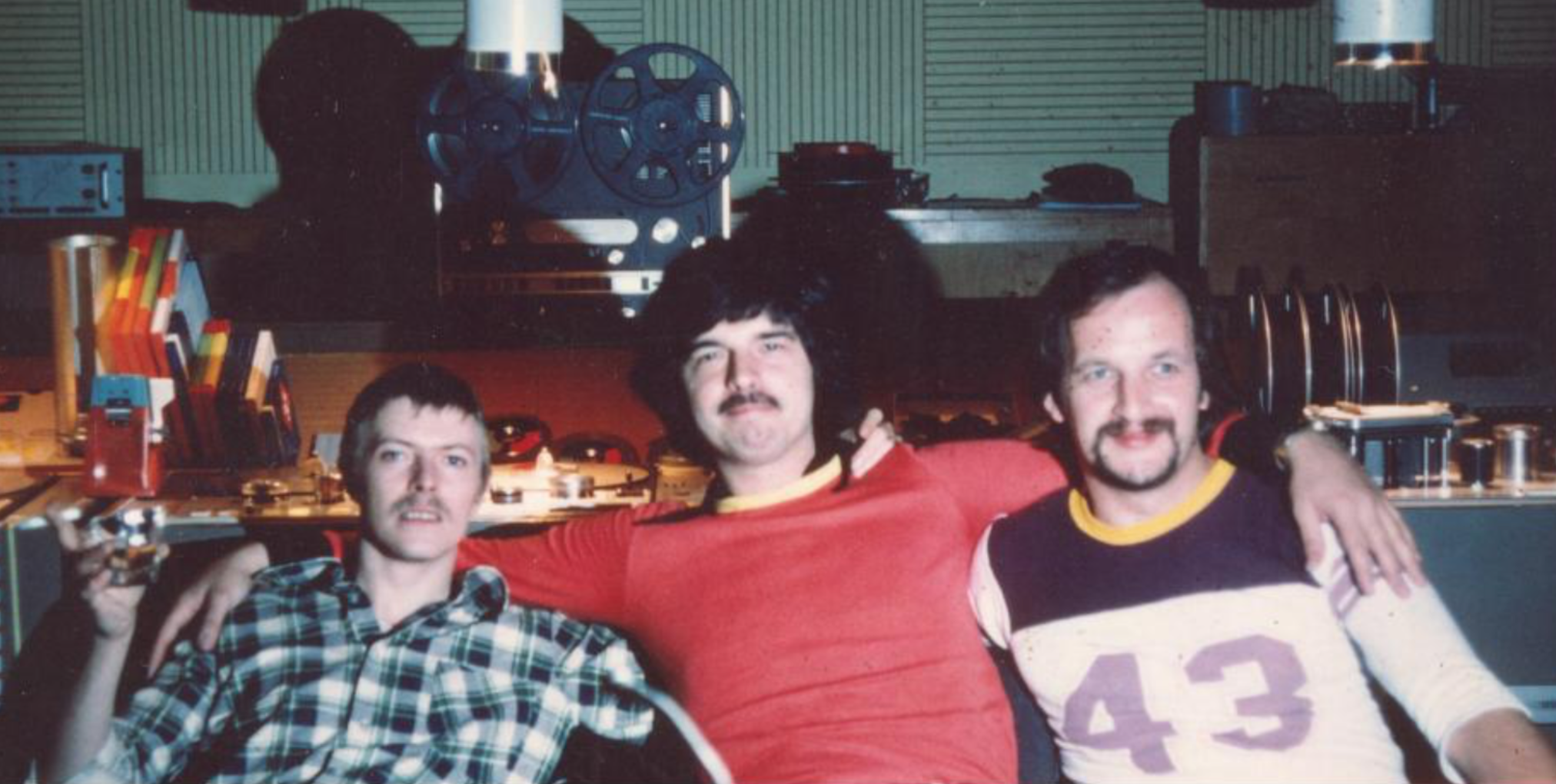 What hip hop is today, is what rock and roll used to be in the ‘70s: experimental, daring, bold, and controversial.

Visconti has had a solid relationship with Waves since 1990, and although he hasn’t yet made any Visconti product with the manufacturer, it’s something he would love to do sometime, when he has the time.

“I would love to design something with Waves, and it’s definitely something we will get around to some day; I’ve just been so crazy busy for the last two years, and these things take time and dedication, of course,” Visconti says. “I love the Waves L3 Ultramaximizer for drum busses; if I really want to squash drums, but want it to have a little bounce, it’s perfect. It’s something you carry over from the old days: we used to buss the whole drum kit to other faders, and throw a compressor on them; and Waves does it very well with that.

“I also love the JJP plugins – I’ll often start with one of his presets, and go from there, as Jack [Joseph Puig] is a very good engineer.

“Then there is the The H-Compressor, which is wonderful; it’s one of the best compressors on the market, and it actually sounds like the analogue world. It gives you options, too; that stuff isn’t just eye candy, it really does do the job.”

We start to chat a little about some of the talent Visconti has worked with recently.

“Over the last two years, I’ve worked with Damon Albarn on The Good, The Bad, & The Queen project; it’ll be out before Christmas. He is a brilliant, and lovely man – a very sweet personality. We worked for a year on that album,” he reveals. Bit of a creative genius, Albarn, isn’t he? “I am used to creative geniuses... They can’t throw me! [laughs] I know kung fu as well, you know... I also worked with [Jane’s Addiction frontman] Perry Farrell on his record, which took about a year, too – I was doing them simultaneously.

“And then there’s the lovely Kristeen Young: she is wonderful, and I demoted myself to co-producer on her last two albums because she absolutely is the co-producer. She then went off and wrote a whole album without me being involved, so I have been demoted further – and happily, I should add – to being her engineer. And this is her best work yet; it’s a re-birth for her. We’re making that now.

“I just came back from St Louis, and I recorded my first hip hop group; and these guys are the real deal. I met them, as Kristeen comes from St Louis as well, and she is a hip hop fan, and they opened for her at a show, too; they are called iLLPHONiCS, and I have known them for about three years. We kept flirting with the idea, but I am not a hip hop producer. But I love them that much, I decided to get involved, and it’s fantastic.

“I am now a Kendrink Lamar fan – To Pimp a Butterfly, what an album. Bowie and I used to listen to that before we started working for the day, because we just respected him so much. What hip hop is today, is what rock and roll used to be in the ‘70s: experimental, daring, bold, and controversial.”
iLLPHONiCS are Bowie fans, too, so Visconti figures they can’t be far apart in terms of sensibility. I picture him at the desk, nodding along to slamming hip hop tracks...

“[smiles] I loved it! It’s more low end than I have used on any other tracks, but that’s the beauty of it: there are no more than four instruments at once; it’s kick and bass, and ‘tickety’ stuff in the high end; a snare, claps, and vocals, with the answer vocal.

“It’s all their work, and I am co-producer of this. I brought stuff into this from the rock world. It’s mainly hip hop, but it’s a bit of a hybrid, as there’s a bit of me in there. I think it’s going to be really great.”

Before I let Visconti go, I ask him if he has three pieces of advice for any budding producer trying to make their way in the world today. He reels these off, instantly:

“First, you couldn’t have been born at a better time with regard to gear. You couldn’t build a recording studio unless you threw £300,000 at it, whereas nowadays, you are very fortunate to have plugins like Waves, and DAWs like Pro Tools or Logic or Ableton Live. So take advantage of that.

“Second, you make music to make a difference, by being creative, and by composing. You record music with this stuff, that’s what you do with it; so don’t mix the two up, as gear isn’t the be all and end all.

“Thirdly – and this is a big one - I know you get inspired by listening to what’s on the radio, and stuff, but your job, if you want to succeed, is to always support the most unlikely person. Find someone so far out, which I did with Bolan and Bowie, who is going to be tomorrow’s big star. If you’re gonna discover another Taylor Swift, what’s the point in that? We already have one! So always look for the unusual, if you want to have a big hit; it’s more of a risk, but it’s not that much of a risk, really. And you’re doing the culture we live in a great service by supporting the most unlikely artist.”