Recently I gave an insight into one of my favourite EQ plugins in Solid State Logic’s Fusion Violet EQ, a plugin that followed on from the previously released plugin versions of Fusion Vintage Drive, Fusion HF Compressor and Fusion Stereo Image, but with the addition of the FAT button. Transformer is the latest analogue circuit from the Fusion hardware device to make the transition to plugin, only this time it seems SSL have gone way beyond providing a plugin version of the Transformer button…

On the original device, the Transformer button was just that – a transformer circuit to add in that transformer characteristic. This plugin however has had a bit of a rethink, and SSL has come up with a number of great new controls that let you adjust and shape the flavour of your transformer’s saturation.

To be precise, there are four new controls – three relate to the transformer’s sound and then there’s a mix control to let you blend the dry/wet percentage. Essentially, there is nothing new to the idea of modelling the sound of transformers; after all, they feature in nearly every piece of analogue audio equipment ever made. Since the move to digital recording, a whole industry has built up around maintaining that analogue flavour. While we hear mention of valves as a source of this analogue-ness of sound, the importance of transformers cannot be underestimated or ignored!

Every sought after piece of vintage audio gear uses transformers. Every famous tube compressor, limiter and EQ owes as much of its sound character to its transformers as it does its tubes. Transformers come with many different design features in all shapes and sizes and likewise have unique sound characteristics. This is why Neve, API and SSL consoles have such a unique sound all of their own. 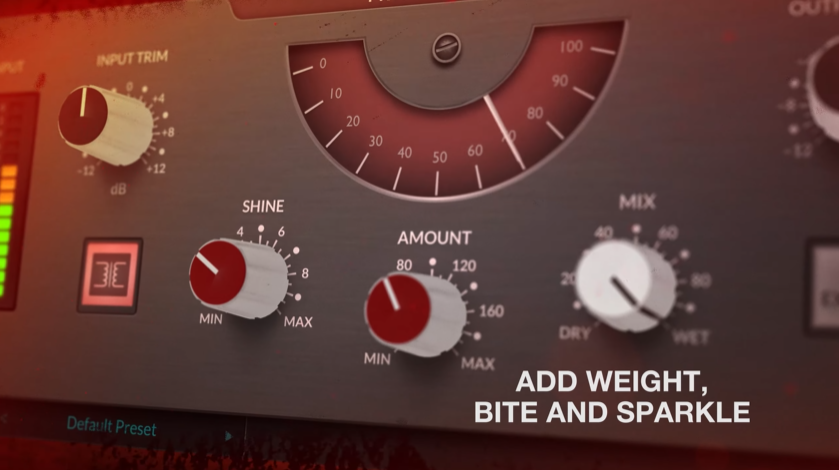 The traditional EI core transformers – the sort you’ll find in the back of your Marshall amp – tend to radiate a noise-inducing magnetic field, which is why they're mounted on the opposing side of the chassis to the rest of the components and encased in mu-metal cases. Toroidal transformers, which resemble doughnuts or moon buggy wheels, are lighter and produce much less magnetic interference, but are still more often than not housed in mu-metal to shield nearby electronic components. Both types of transformer are regularly found in professional audio equipment.

All components in an analogue circuit together make up its sound, but transformers are a large part of what makes up the sonic qualities of any audio device and are even more key when it comes to solid state circuitry.

Transformers are used extensively in audio circuits on everything from DI boxes to loudspeaker crossovers and all points in between, especially those traditional and sought after mic preamps and channel strips where it is common to find input and output transformers. Transformers are used to isolate one circuit from another while at the same time transferring electrical energy across circuits. An analogue console for example will have several transformers along the signal path from mic input to the point where it exits the console to your DAW.

Given that valves started to disappear from consoles in favour of the more neutral sounding and less coloured transistor, a move which also resulted in lower power consumption and less heat generation, it then fell upon the transformer as the tonal and saturation source of audio character.

This plugin really does give you hints of sitting at a classic studio console and I love it.

Saturation is generated when an increasing flow of current in the coils produces a magnetic field beyond the point where the core’s flux density can increase. Saturation of the core then results in that very pleasing audio distortion which manifests itself as increased low frequency harmonics. The harder you drive the transformer, the more low frequency harmonics, the warmer the sound. It’s these flavours of sound that will never go away – not while people still have passion and love for their sound and their analogue equipment.

I’ve heard the argument on so many occasions that a plugin will never sound the same as the actual piece of equipment, but I can honestly tell you that even the same two pieces of analogue vintage compressor for example – from the same company, manufactured a week apart – don’t sound absolutely identical.

The SSL Fusion Transformer plugin goes way beyond the simple in/out button of the original Fusion, and in many respects beyond the beautifully clean warm sound of SSL mastering consoles like the Sigma Delta. It gives you a plugin you can drop onto a channel in your DAW and not just hide away on the mix bus for mix bus magic. It has the ability to add dimension to sound that mere EQ cannot. I found it particularly good on vocals where the additional body and depth made rock vocals really sit up in the mix. The new control, Shine, adds a presence equally suited to guitar and vocals which just gives that impression of having taken the sound and added that third dimension. I’d like to say that this is similar to the drive and saturation parameters that you’ll find on other SSL plugins, but with the level of control SSL has afforded you here, it simply isn’t like any of the others. It’s way more flexible and audible.

The same is true for the mix bus; it has some really lovely analogue glue that, not unlike compression, adds that special filling of sonic goodness and dimensional density which contributes a certain analogue-ness to your mix. I could call it a richer sound at the risk of promoting a well known high street AV vendor, but that’s exactly what it is. It adds value to your mix. I wouldn’t be so brave as to speculate on what SSL used to come up with these manipulating algorithms, but what I can tell you is that it sounds good.

As with all of the Fusion range, you get a comprehensive set of user presets as well as the option to store and recall your own. There are all the usual SSL undo/redo A/B options along with an Eco button to reduce latency. On the left and right are input and output meters respectively together with trim controls for gain matching if necessary. In the middle of the display is a handy meter which gives an indication as to how hard you’re driving your transformer. Below this are the three controls for Shine, which changes the flavour of the saturation, Amount, which drives the transformer to produce the saturation, and Mix, which blends wet and dry signals by percentage. To the right below the output trim is a LF EXTND button which adds a little more low end.

This is another excellent plugin from SSL which, far from copying the flavour of the unit from which it takes its name, extends the range of analogue glue available to you in your DAW. This is definitely SSL’s most exciting Fusion plugin yet, and demands your closer inspection.

If you have the I/O capabilities and enough quality AD/DA conversion and spare rack space at your disposal, I would strongly recommend you go and buy the analogue SSL Fusion. The SSL Fusion Transformer plugin however is the odd one out in that its additional controls give you a far greater range of saturation character than the standalone analogue unit. In this respect, it’s a plugin you can use either instead of, or as well as.

This plugin really does give you hints of sitting at a classic studio console and I love it. I’m fully aware that the majority of people, including myself, are working in the box these days and we have limited space in which to add additional pieces of kit, but you no longer have to. Just take a closer look at the range of SSL Fusion plugins. Better still, get a monthly subscription to all of SSL’s plugins including the Native, Native X and Fusion range and start experimenting.

SSL Fusion Transformer is available for all major DAWs as 64bit AAX/AU/VST/VST3 for Mac and Windows.