SSL SL 4K B Channel Strip Review: "It Feels Like There Are No Rules"

The latest in SSL’s range of plugins has arrived: SL 4K B Channel Strip, which might just be the manufacturer’s best emulation so far. Headliner takes a look…

It was just over a year ago when I acquired some of SSL’s Fusion plugins: Vintage Drive, Stereo Image (both now staples on my master bus), and HF Compressor – and I have to say, they’re all brilliant. Then, when SSL started rolling out monthly plugin releases shortly after, I soon got the bug: Native X-Echo is commonplace for airy guitars and specific vocal FX; Native X-Gate is a go-to; and the classic SSL Mix Bus compressor sits proudly where another manufacturer’s equivalent used to. I know these plugins aren’t cheap to buy, but you do tend to get what you pay for – and the introduction of a subscription service ($14.99 per month for all SSL plugins) offers an attractive alternative to forking out for each individual product.

SL 4K B Channel Strip is the latest member of SSL’s fast-growing plugin family, and it’s an absolute beast. It is, SSL says, a meticulously crafted emulation of the SL 4000 B, SSL’s debut console which dates back to 1976. This console was unique in several ways, and after only half an hour working with this plugin, I realised that the plugin was too. And here is why… 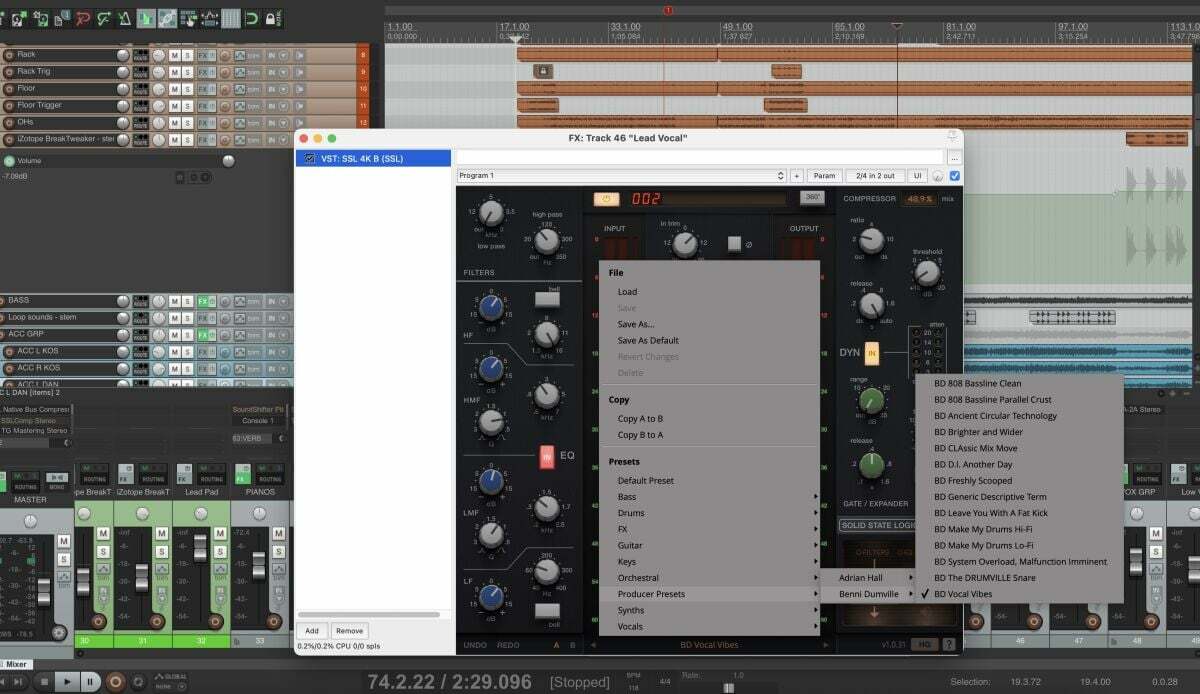 The mic pre section, for me, is without question the coolest part about the SL 4K B plugin. After doing further homework on the original SL 4000 B console, I learnt that its mic pres were transformer-loaded with Jensen JE-115K-Es and that it boasted dbx Black Can 202 VCA faders on each of its individual channel outputs; this is what gave the console such character, and it appears SSL has dived in deep here to ensure that the modelling of these circuits has been nailed on as close as possible to the original.

I may not have heard the real board in action, but the possibilities that this plugin offers are vast; and sonically, it is exquisite. It’s also key to note that this is not a clean channel strip - much like the original, evidently. Yes, there is a beautiful smoothness in the high end on the EQ section, as you’d expect, but the beauty is in the core, which is literally jam-packed with colour.

There is an ‘in trim’ dial (which determines how much signal is being fired into the circuit), a 4K B mic pre dial, and a pre button; when you engage the pre button, you can begin dialling in the 4K B mic pre.

This is a really explosive sounding pre, full of character, which means you can get your sonics nice and punchy very easily, but you can also thicken it up, give it more guts, or if you’re feeling brave, turn it right up for some quite ferocious distortions. Below the pre is the dbx Black Can fader complete with Cut, Solo, Width and Pan controls (the latter two only work in stereo, of course). This generates further harmonics the more you raise the level, and thanks to the inclusion of a digital output trim at the bottom, you can drive the fader as much as you like, then just roll it back off at the end.

I tried dropping an instance of 4K B onto an existing [processed] vocal stem, engaging the pre, and just dialling it in a little, and that alone brought entirely new life into the voice - a similar effect that my Thermionic Culture Little Red Bustard summing mixer provides when I treat a vocal, except without the hassle of waiting for it to warm up..! It ‘feels’ analogue, put it that way.

Something else I learned about the SL 4000 B is that its compressor was based on the topology of SSL’s Bus Compressor. So of course this also goes for the plugin. It ultimately means ratios are set to fixed values of 2:1, 4:1, and 10:1; and the same goes for the release: .2, .4, .8, and 1.6s. It doesn’t feel limiting, though - if anything, you find yourself making decisions faster.

But there’s more - on both the ratio and release, there is a ds option. Set both dials to ds and you have a really great de-esser; set just the release to ds and you’ve got a much faster release time on your compressor.

The compressor itself is great, and smooth – it works beautifully on vocals, bass, guitars, drums – but sticking with vocals for a second, I am such a fan of the de-esser that I think I’d be tempted to use it just as a de-esser (it’s one or the other, of course) then perhaps bring in an 1176 or LA2A, or both, as my main vocal compressor(s). Equally, if I’m not using the de-esser for whatever reason, this compressor is a very solid option full stop, particularly with the wet/dry option, and with the Jensen mic pre roaring. You really can get great results. The gate is also excellent: simple to use, and very responsive. 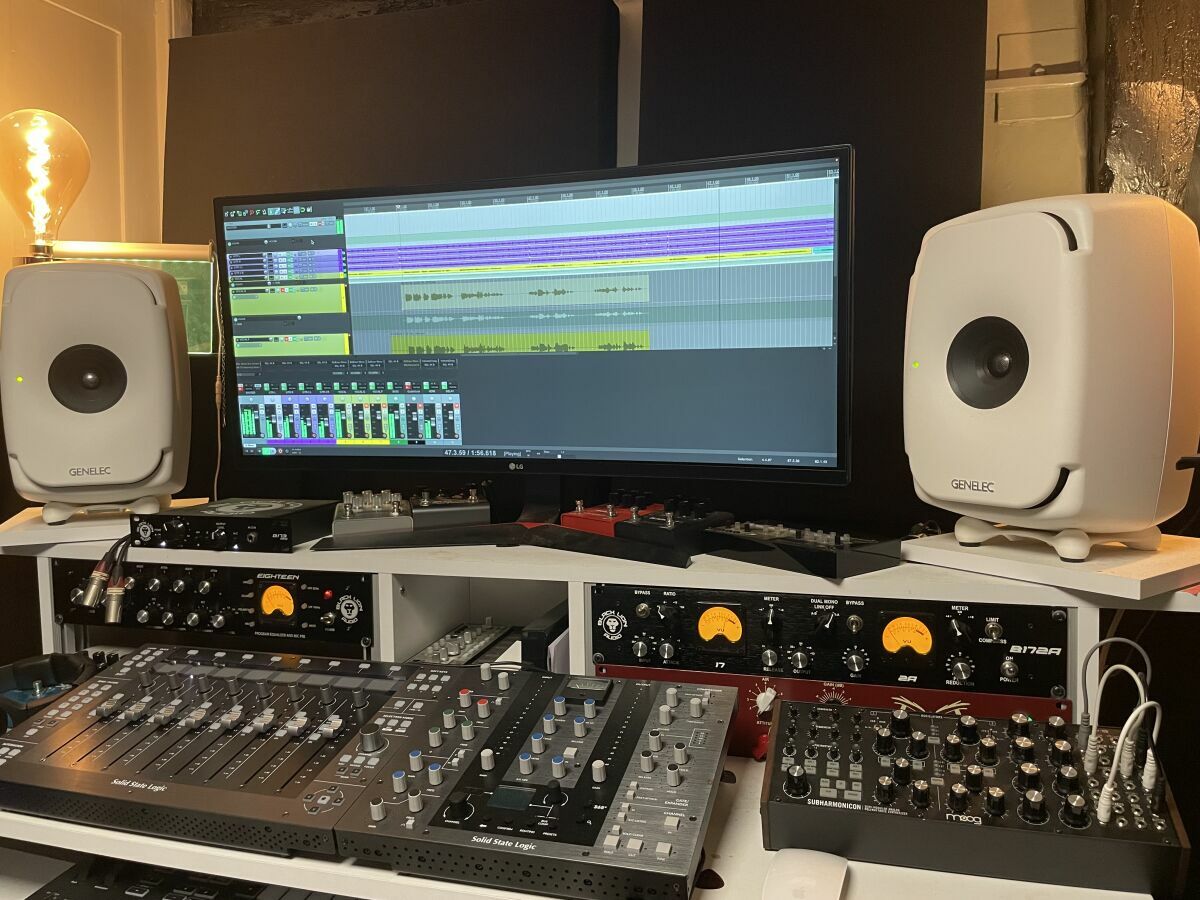 Then in the lower right hand side there is a digital readout which allows you to switch up the order of the processing chain: EQ > Filters > Dynamics, or whichever way you fancy.

Simply put, the presets on the 4K B are incredible - and some are quite different to what you might expect, particularly producer Benni Dumville’s signature offerings: his ‘Vocal Vibes’ pushes a good chunk of air in at 16kHz with a perhaps less common [on vocals] low boost at 89Hz, and is full of drive - and it just sounds excellent (as long as you bring the output trim down!) And his ‘Generic Descriptive Term’, whatever that means, sounds absolutely epic on a drum bus (and probably everything else). These presets feel like tools in themselves, and inspire creativity.

There are some great manufacturer presets in there, too: Orchestral > Strings > High got me fabulously smooth sounding strings very quickly; Guitar > LA Clean Guitar Amp is lovely and warm sounding; and I found Keys > LA Electric Keyboard brought life to my Rhodes, and all kinds of cool effects when I dropped it on my Hammond.

This is a really explosive sounding mic pre, full of character…

You really need to hear them to believe them, and self-producing artists can certainly learn a lot from some of these presets, as they offer an instant insight into what this old console was all about. You learn as you go, and it feels like there are no rules, as such, with this channel strip.

Pulling up a small-ish project (32 tracks and a few FX sends), I remove any processing that is currently on there, and drop an instance of 4K B across the lot, utilising SSL’s excellent 360 app and two hardware controllers: UC1 and UF8. I then begin to dive in, soon using the hardware like an analogue mixer, and often forgetting that it isn’t one, particularly when comping a vocal which was done over three takes; the simplicity of soloing and muting using the hardware rather than the mouse is such a great feeling. Then just making cuts tangibly - with real knobs! It all feels more ‘real’ to me, and this is the beauty of this SSL hybrid offering - it allows you to shape a mix easier, and makes mixing a far more enjoyable experience.

And a happy mixer is a better mixer, I guess? The SL 4K B is certainly the most appealing channel strip I’ve worked on in a long time - and not just from a sonic perspective. It is as versatile as it is functional, and really great fun to work with.