SSL’s new X-Limit is a limiter for increasing loudness for anything from single track to mix buses, to master buses. Headliner takes a close look at this very competitively-priced new plugin, and checks out its strengths and limitations…

It is no surprise that X-Limit features another beautifully laid out user interface that actually invites you to dive in and start using the plugin. The GUI springs into life the minute it starts passing audio and encompasses every aspect of incoming audio, processes applied, and outgoing audio on one screen.

A number of controls are immediately obvious like Gain, Threshold and Ceiling with which to increase loudness, set the point at which the limiter starts to take effect, and set the maximum level of your output signal.

In the top left next to the on/off (bypass) button is a scroll left or right box with which you can cycle four different flavours of limiting, all of which are subtly different – although ‘Punch’ adds a more distinct colouration and characteristic to the sound.

From its name I assumed that Punch would naturally help to bring some programmed drums to life, but it was Transparent that actually made them sound larger and more dynamic while reducing the level of – but clearly maintaining – the all-important transients.

Auto seemed to do a similar job to Transparent but there was a smoother transition between the threshold and the ceiling, which sounded perfect on synth and orchestral stabs and pad swells.

It was at this point when I stopped reviewing and disappeared for a day, and just played about replacing a number of comps in a couple of mixes – just to check out how much easier it would have been if I’d had X-Limit earlier.

Without exception, everything I tried this on was a subtle if not immediately noticeable improvement.

Having a musical brick wall limiter that has the character of a high quality compressor is incredibly useful when it comes to individual tracks and group buses, and can negate the temptation to leave an active limiter across the master bus – which is something I’ve been guilty of.

Without exception, everything I tried this on was a subtle if not immediately noticeable improvement, whether replacing a comp or simply adding it to the end of my plugin chain. It made me wonder if I hadn’t missed a trick, and should have been more aware of the limiters I already had at my disposal – however it quickly becomes apparent that not all limiters are born equal!

As with all SSL plugins, there is more than one way to adjust parameters. For example, with the Threshold and Ceiling controls, you have your rotaries in the bottom row, the sliders to the right of the main window, as well as boxes above the sliders in which values can be set.

All are a simple click and drag style, but I also found if you hold down Alt and Cmd on your Mac keyboard you can slow down this change, allowing you to select precise values. This feature also works for any rotary or value box and so far, all the other SSL plugins I’ve tried.

Other really useful controls are the provision of a release time of 10 to 4000ms, which reacts as the signal is falling below the threshold and can extend how long the limiting continues to affect the audio. This is useful if you’re trying to create a pumping style or if you’re trying to reduce transient content.

For general use you can use the Auto release button, which causes the release time to be adjusted on-the-fly depending on the source audio. In the same section is a Look Ahead button, which while it will introduce a little more latency, is much better at cleanly catching transients without any unwanted distortion.

Another really cool feature which you will want to use, especially if you are using X-Limit as a bus or master bus limiter, is True Peak. Lighting this up will give you an algorithm with a higher sample rate, effectively limiting inter-sample peaks and reducing aliasing artefacts.

This becomes more apparent the harder you drive the Gain.

It quickly becomes apparent that not all limiters are born equal.

There’s a rotary control that, as it is increased from 0% – 100%, unites channel processing. The processing applied to either left or right is applied to both channels equally: 100%.

Left and right channels are processed independently depending on the source audio: 0%. If for example you’re limiting a stereo piano, but you don’t want the louder struck notes in the lower register with focus to the left unnecessarily limiting higher notes with their focus to the right, then it would be beneficial to process the channels independently.

Alternatively, if you’re limiting a percussion bus with toys placed around you, you want to maintain a clear stereo field and don’t want independent channel processing pushing your instruments back into the centre. Then you want greater channel linking to maintain the stereo image by processing the channels together.

I have to admit that it’s harder to hear the subtleties of a few percent, so to aid your decision-making, X-Limit provides you with two useful visual indicators.

The first, Ducking, as the name suggests, is the amount by which the quieter channel is unnecessarily reduced. The second, Steering, is the direction the signal is being focused or steered as a result of independent processing of left and right channels.

Using these as visual aids, it’s possible to strike a balance by selecting the percentage that produces the minimal readings in one, the other, or both – depending on your desired outcome.

I can’t name another brick wall limiter that retains transients and punch so transparently, or another maximizer that behaves so impeccably.

The I/O Diff, Listen button allows you to audition the difference between the input and output, which can be useful for adjusting or checking the channel link setting as well as threshold level and release times. The smother your I/O Diff, the smoother and more transparent the audio after limiting.

The Gain Match button is a quick way to check how the limiting choices you have made are affecting your audio. When it’s engaged it removes any loudness you may have added and just leaves you with the sound of your limiter. You can use the bypass to compare this to the original audio.

As with all SSL plugins, there’s a handy library of factory presets along with the ability to customise and save your own. Together with all the usual SSL Copy A/B and B/A for comparing presets, Revert changes and Delete or Overwrite user presets.

The usual Undo and Redo functions are there to compare edits along with the highlightable ‘?’ in the bottom right hand corner, which gives you a brief description of any controls you hover over with your mouse. 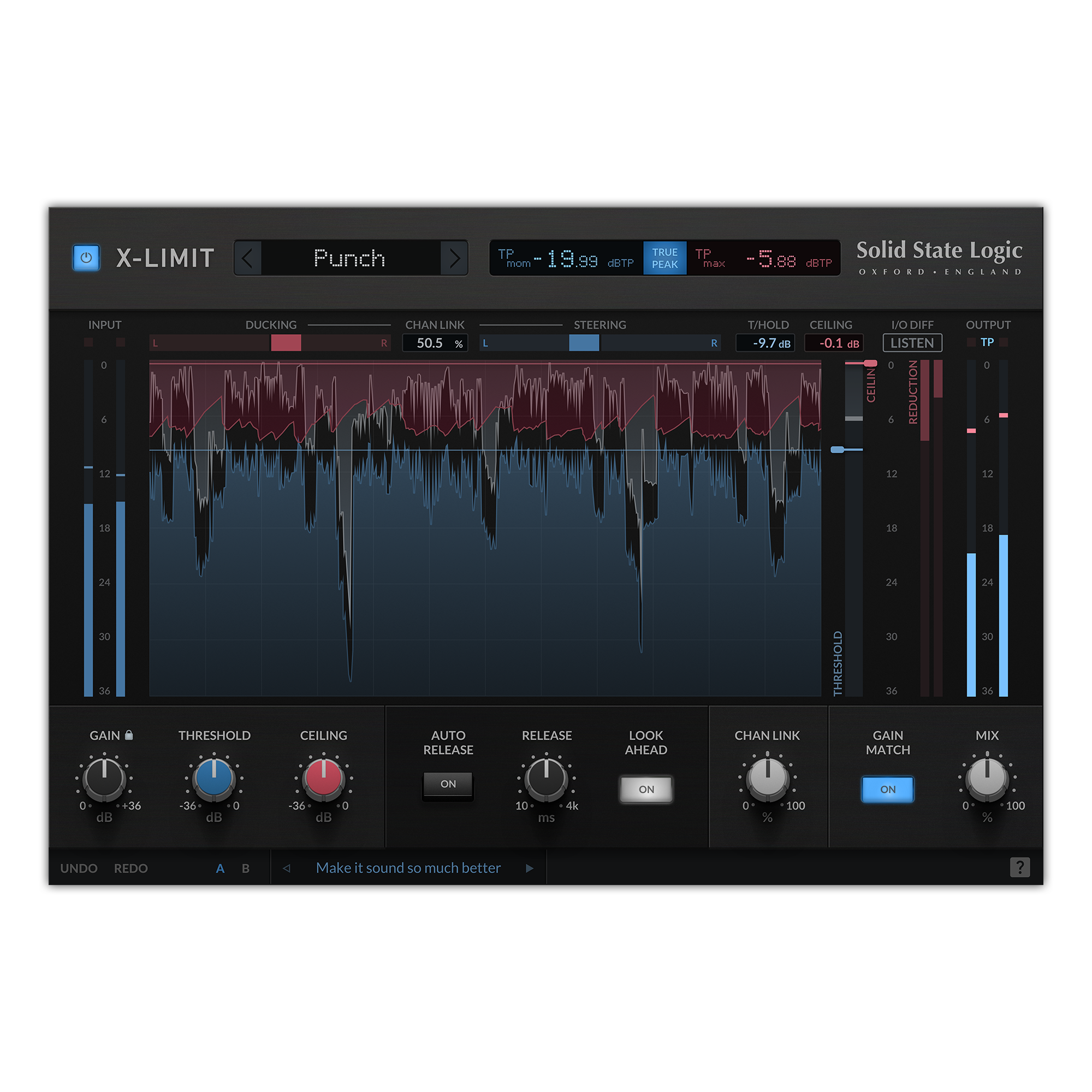 SSL has really moved forward in its efforts to put great tools in our hands, and with that blend of in-the-box accessibility and traditional high end audio sound, they have definitely created some noise. X-Limit fits perfectly into that stable and delivers a really great dynamic product.

Not to be biassed in any way to the competition, but I’ve become a bit of a fanboy of late when it comes to SSL plugins. Not for any one specific reason, but because not only do they have a great sound and a great-looking user interface that is simple and intuitive, but because you get a lot more flexibility and control – often cleverly concealed within said interface – which represents real value for money.

The X-Limit is no exception and has overnight become my new go-to! I can’t name another brick wall limiter that retains transients and punch so transparently. I can’t think of another maximizer that behaves so impeccably on individual channels as well as the X-Limit, not to mention its magical combination of Threshold and Ceiling, with which you can be as creative or as subtle as you wish.

I also like the ease with which you can change the flavour of your limiting, from a really upfront focus with Transparent, through a more encompassing Glue, to a pumping-type effect with Punch, and then a transient taming Auto setting.

SSL X-Limit is available as part of SSL’s ever growing Complete subscription package or for purchase as a separate plugin. It is available in VST, ST3, AU and AAX formats for macOS and Windows and as always, there’s a try before you buy option available from the activation window when you first open the plugin.