One of the most in-demand mastering engineers in the business, Stephen Marsh has applied his signature touch to some of the biggest titles in the worlds of music, film, TV, game soundtracks, and more. Indeed, his regular client roster comprises a glittering array of Grammy, Oscar, and Golden Globe winners. Headliner caught up with the man himself to talk the art of mastering, his approach to his craft and the Merging Technologies kit that is so central to his process…

Watch the video interview below and scroll down for the complete story.

For those who may not be fully familiar with the art, what does the mastering process entail?

Mastering is essentially the completion of the recording. It is inherently about sound, and the way we manipulate sound is the process of mastering. The goal isn’t necessarily to make anything sound different, and that’s the part people find hardest to understand. One of the primary functions of mastering is to finish the mixes and also make sure that they are presented properly and formatted appropriately for the various streaming formats, production for vinyl, Atmos etc. It’s about increasing the connection between the artist and their creation, their vision and the audience.

Mastering is so specific, and some people may not realise why it’s so important to use a expert. How would you explain that someone who was thinking about doing it themselves?

One of the greatest challenges of mastering yourself is perspective. A lot of artists, especially when you’re doing so much of the process yourself, are considering so many different things at once. When I come into it, I’m considering things on just one level – how am I reacting as a new audience to this creation? It’s a very different experience for me compared to someone who is already way inside of it.

How long does it take you to master a track?

If it’s a straightforward, well mixed pop song, it may only be 20 minutes. If it’s a piece of score, where there are different tonalities, you might spend three hours on one song.

Why did you decide to go into mastering?

An opening came up in a mastering department for the studio I worked at. Very graciously, the engineer that ran that studio said to the boss, ‘why not give me a shot’? He allowed me to succeed and fail on my own, but he got me in the door and that was huge.

Who were some of the mastering engineers you admired?

When I moved to LA to start mastering all the legends were still working. A few of them still are. When I arrived it was Wally Traugott at Capitol, Doug Sax at the Mastering Lab… these were the people that created my job. They took mastering form a perfunctory process of translating something off of one media and getting it onto another, so they could mass produce it, and they elevated it to the art that it is now.

How do you deal with ear fatigue, and when do you know that enough is enough?

I deal with fatigue by breaking up my day. I am very fortunate that I have a lot of interests and have found ways to make them all work. I do mastering, but I also cut records, I do tech work, I fix gear. That helps me a lot.

One of the biggest differences is that a lot of stereo mastering is about making things bigger and bringing things closer to you, and so much of Atmos mastering is not necessarily about pushing things away, but allowing there to be distance if there should be. 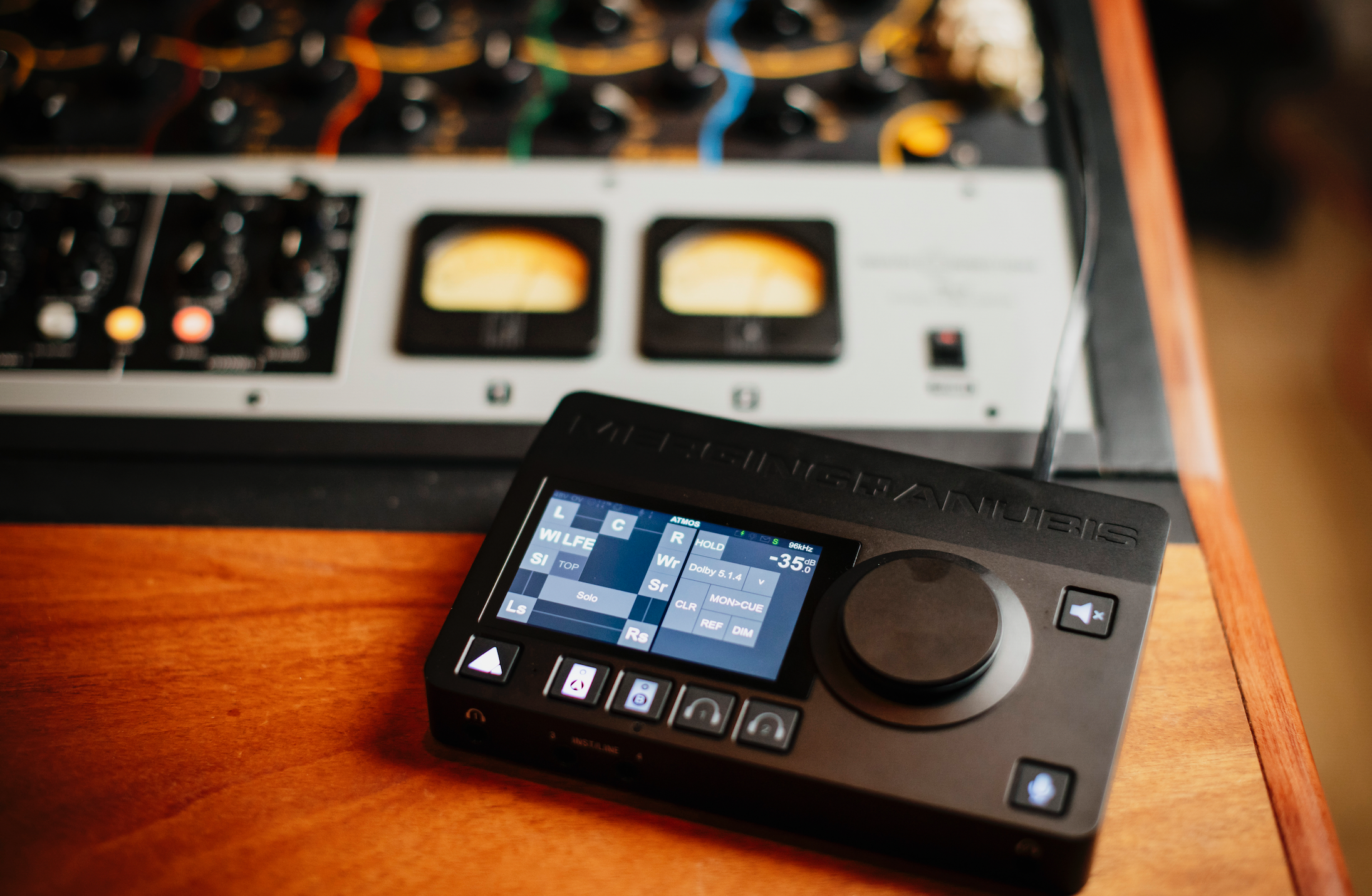 What is your Atmos setup?

Our Atmos setup here is Pyramix-based and works all within one system. So, I have a Pyramix on a DAW and a PC, and my Dolby renderer also on the same PC. Everything talks via the Merging audio driver. All of the monitoring gets handled between the Dolby renderer and the Pyramix DAW via internal links. And then my monitoring comes through my Anubis.

One part of Atmos is making sure that all the downmixes translate, so if someone is playing it back in 7.1.4, or 7.1.2, or 5.1.4, or 5.1, two-channel, binaural, they all need to sound like they make sense together. The Anubis allows me to do all of that stuff very quickly.

How did you come across Merging Technologies, and how has that been a breakthrough for the work you do now?

I came by Merging about 10 years ago. I needed to work in DSD, and they were the only company offering a true end-to-end solution that was mature, and supported, and still continuing to be developed. The by-product of that was that I found it was a system that literally did everything I needed it to do. Traditionally, maybe 15 years ago, the standard in mastering was to do a thing called pitch catch, where you have one DAW which will receive all of your source files, and you then play those down through your analogue console and capture them with another DAW. That would be your mastering workstation. What I found was that Pyramix replaced both. It allows me to work with all the material in one unit, one DAW. It allows me to work with mix sample rates, mix bit depths, all of my plugins work at high resolution, and it allows me to have one version of everything. So, I work at the very highest resolution and then everything can come down off of that. That means I only have to proof it once, I only have to do all the metadata and clerical manipulation once, and then it can go out in all the necessary formats. It’s unparalleled as far as I’m concerned.

Tell us about the integration between all the Merging products.

At Marsh Mastering we have Pyramix as the DAW, Hapi as our main D/A and A/D, and an Anubis as our monitor controller. The beauty of it is that they all just work!

How is the Anubis implemented within your chain?

My Anubis is integrated in my chain as my monitor control, and it essentially replaced my main stereo monitor controller. When you are critically listening to audio you need to be able to filter it in certain ways to be able to expose different elements of it quickly and easily, just to find out what’s going on. The Anubis handles all of that really cleanly. The interface is super clean, easy to use, and once you get into the thinking of the way Merging stuff operates, it’s really easy to make it go fast.

You have a lathe system in the studio. How did you get into cutting vinyl?

When I first got into mastering in the mid ‘90s people were still cutting them, but very limited, primarily just a couple of genres. I started off at Sony Music Studios and they didn’t have a lathe on the west coast at the time, so I never cut much; I was in a couple of cutting sessions but that was about it. Anyway, I had the opportunity to purchase a working system, so we jumped on it, started working on it, brought it up to snuff, and we’ve been going gangbusters on it ever since. We have a 1947 Scully lathe that has been fully updated and modified to cut modern records.

What have you been particularly excited about working on recently?

Don’t Worry Darling, the new film with Harry Styles. It’s a John Powell score and we mastered it in stereo and surround. It lends itself to Atmos so naturally - it’s a psychological thriller that has so much coming at you from every which way. It’s one of the best sounding things I’ve ever had the chance to work on.