Taylored Sound: "Crisp and clear audio is essential to any sort of production"

Toronto is sometimes referred to as ‘Hollywood North,’ holding the place as Canada’s premier media city. If a documentary, advert or sports production is being filmed in the area, there is a good chance that Scott Taylor of Taylored Sound is holding the boom and rolling the field recorder.

“What people might be surprised to learn about my job is that after 10 years in this industry, I’m still learning new stuff every day,” he shares.

“Whether it’s mic placement for a tricky wardrobe that I’m dealing with, or even just a new camera with some new audio menu settings, I find that I’m constantly still learning new things every day. There’s so many different curve balls that can get thrown at you on any production and solving these little ‘problems’ is part of the fun of the job. Even if it does get a tad stressful at times!”

Taylor is an audio engineer and the owner and operator of Taylored Sound – specialising in post production audio for film and television, as well as location sound recording and mixing.

After graduating from the Ontario Institute of Audio Recording Technology in 2010, he relocated to Toronto, Ontario, where his company is now based.

“My most memorable project to date would have to be a documentary titled The Last Tourist,” he considers.

“It’s a feature-length documentary which dives into the impact that tourism has on our world. It talks about sustainable ways of travel and eco-tourism and covers the positive and negative impacts that tourism has on our globe. We travelled to roughly 10 different countries over the course of a year and a half and got to meet some amazing people and hear some really great stories along the way.” 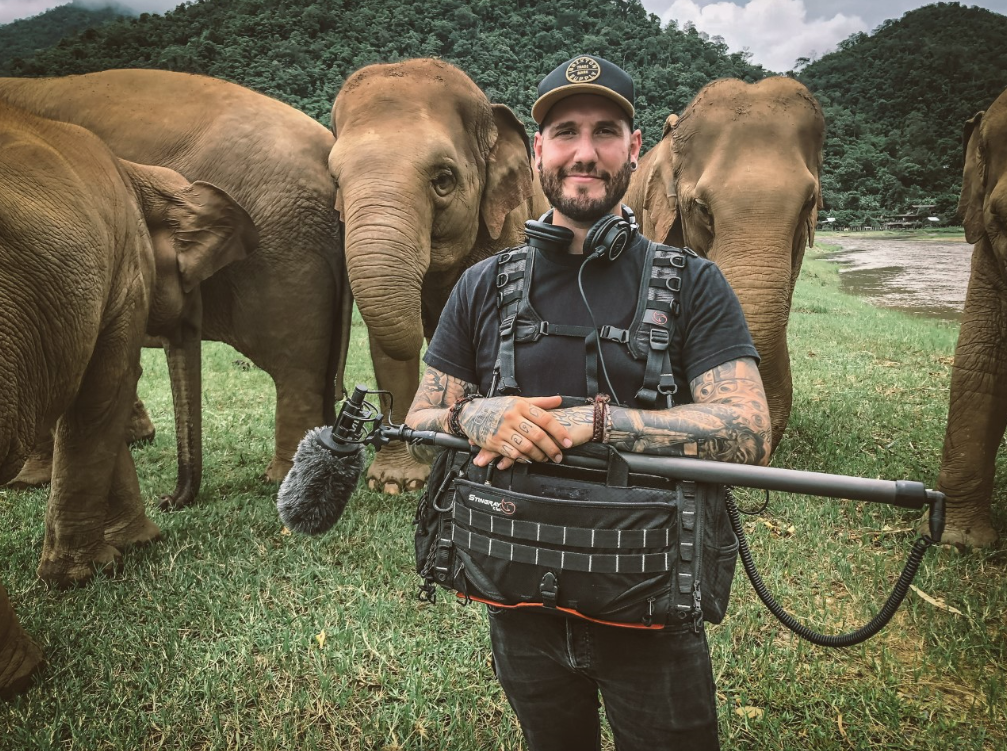 It’s important that audio is captured crisp and clearly because it’s 50% (maybe even 51%) of telling a story.

Central to Taylor’s rig for all of his work is Lectrosonics’ Digital Hybrid Wireless technology, specifically a dual-channel SRb receiver and two SRc receivers. The SRc units are paired with a total of four LT belt-pack transmitters (two each on blocks A1 and B1), while the SRb picks up the signal from a pair of SMQV transmitters on block 21.

“Like a lot of people, I started out with a different and cheaper brand, but quickly switched over to Lectrosonics as I began to get more paying jobs,” he explains. “It’s important that audio is captured crisp and clearly because it’s 50% (maybe even 51%) of telling a story. It’s both a mixture of dialogue and sounds which we react to as the viewer and gather information from to help tell a story. Crisp and clear audio is essential to any sort of production, and is often overlooked.

Taylor is currently working on a few projects for SportsNet, TSN, and ESPN, including pre-game interviews.

“Between those and commercials, I am working about three to six jobs per week in the Toronto area alone! I use Lectrosonics on every single project that I’m a part of. Lately I’ve been doing a lot of commercials in and around Toronto, but I have also been doing mini docs and telling real life stories. I’ve also recently worked on some stuff for the Junos and have also had the pleasure of working with Dan Aykroyd and his Crystal Head vodka company." 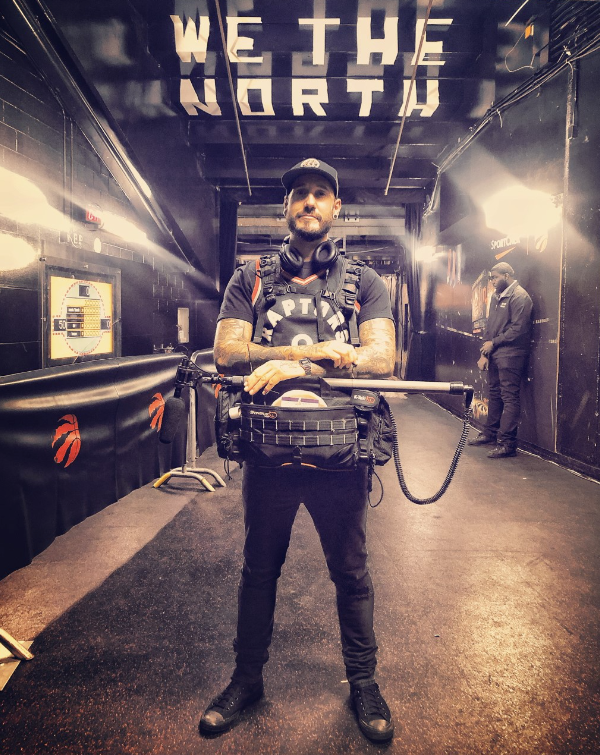 Crisp and clear audio is essential to any sort of production, and is often overlooked.

“Lectrosonics always proves to be essential on all of my shoots,” he states. “I run three separate SRc dual channel receivers and they integrate into my kit flawlessly. It’s easy for me to route channels if need be and with my added antenna systems I tend to have pretty great range for all of my wireless.

"Lectrosonics is essential for my jobs as it supplies me with great range for my wireless systems, and if I need a little added oomph to my signal I just kick my SMQV transmitter packs into 250mW and it typically keeps my signal very strong, even in tricky circumstances with other wireless systems around.”

Because Taylor splits his time between production sound mixing and audio post, he knows what he wants to hear – and what he doesn’t.

“If we’re shooting in an area where I’m not familiar with the RF profile, it’s always easy to roll up, scan and find clean channels without interference or dropouts,” he explains.

“Most of the time, once I get a pair of frequencies on block 21 up, I don’t need to change them. Together with the SMQVs, the SRb gets most of the dialogue. It was actually the first piece of Lectrosonics gear I bought and it’s still going strong! I use the LT/SRc combos as stereo pairs for plant mics and room mics. I just used two LTs on either side of a pipe organ for a virtual convocation ceremony at the University of Toronto.”

On shoots with extreme range needs, Taylor relies on both shark-fin antennas and the fact that the SMQV transmitters can output at up to 250 milliwatts. 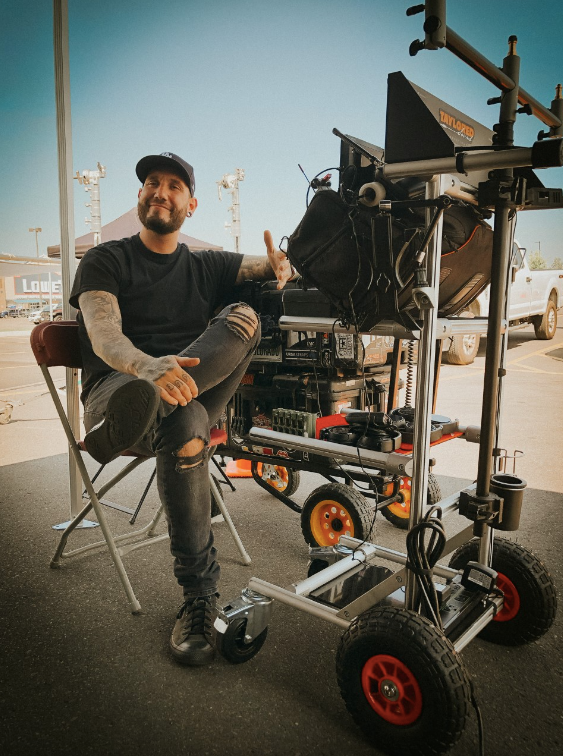 “One example was an outdoor show where we were shooting on water, boat to boat,” he clarifies. “So, for a situation like that, I’ll strap the antennas on my kit and push up the output power. It’s a matter of ‘better safe than sorry’.”

However, his favourite aspect of his entire rig is the slot-mount form factor of the SRb and SRc receivers.

“I run a pretty industry-standard audio bag with a Sound Devices 688 recorder and an SL-6,” he explains.

“The SL-6 houses the SR-series receivers and powers them. I can also use two whip antennas in total rather than two on each receiver, and that makes for a cleaner setup. So does the fact that this eliminates extra wires dangling off receivers and other clutter in my bag.

"But that the receivers can be slot-mounted in the first place makes all this possible and gives me up to six channels that I don’t have to worry about. I’ll add that the frequency separation when I’m doing so has been trouble-free as well. Even with all six channels in use, I’ve not had a crosstalk issue or anything of that nature.”

Some productions raise the issue of durability, an area where Taylor finds Lectrosonics leaves nothing to be desired:

“The gear is definitely rugged! I had a situation a couple of months back where I had my boom pole mounted to a stand with a Lectrosonics HMa wireless transmitter attached to it. The boom was just gathering the ambience of the room, but at one point was accidentally kicked over by one of the grips on set.

"After picking the mic and transmitter back up, everything worked completely fine. I’ve also had an actor get mad during a group interview at one point and actually throw his Lectrosonics mic pack across the room. After retrieving it, lucky enough it still worked fine!”