Björk’s vision for her most elaborate and experimental stage concert yet required the right technology to turn her ideas into reality. FOH engineer, John Gale explains how d&b’s Soundscape system is changing the sonic landscape across the live events industry.

Following a world premiere at New York City’s The Shed and a residency at Mexico City’s Parque Bicentenario, Björk announced her European premiere of her Cornucopia show at London’s The O2 in late 2019.

Describing it as her most elaborate stage concert yet, and breaking new ground in terms of technology meets art, Cornucopia is a digital theatre performance crafted around Björk’s most recent album, Utopia.

Innovative to its core, Cornucopia embraces the very latest in immersive audio technology thanks to its use of d&b Soundscape, a 360 sound system that immerses fans in a sensory techno-acoustic utopia.

Tasked with helping realise Björk’s sonic vision was FOH engineer, John Gale, who says the singer was keen to see how he could transfer her ideas into a live scenario.

“She’s very clear in what she wants to do and has strong ideas, and we don’t always know what curveball might be thrown in the next day,” begins Gale. “It’s good fun; I look forward to the challenge each time it comes up. When I started on the Utopia project, Björk came to us just before the first show and said, ‘Is there any chance we can have some bird effects coming from behind?’ That was the first clue that I knew we were going to head down that route!”

Björk was keen to try d&b’s Soundscape system to see if it was right for her needs, and had a small demo system sent to her space inside a lighthouse in Iceland.

“She came up with a load of ideas before I even got in the room with her, and what’s great about this system is it can scale from a small space up to a massive space like an arena,” Gale points out.

“So once you’ve made your decision, the software will work out the maths and allow you to place more speakers into a setup. Each time we went to pick a venue, it would all scale up. We were really pleased with the result, because we didn’t actually know how well it would work with these really large venues!”

The team were one of the first to try the system in an arena-sized venue: “We were really, really happy and super excited once we were listening to it and realising that we were going to pull this off!” 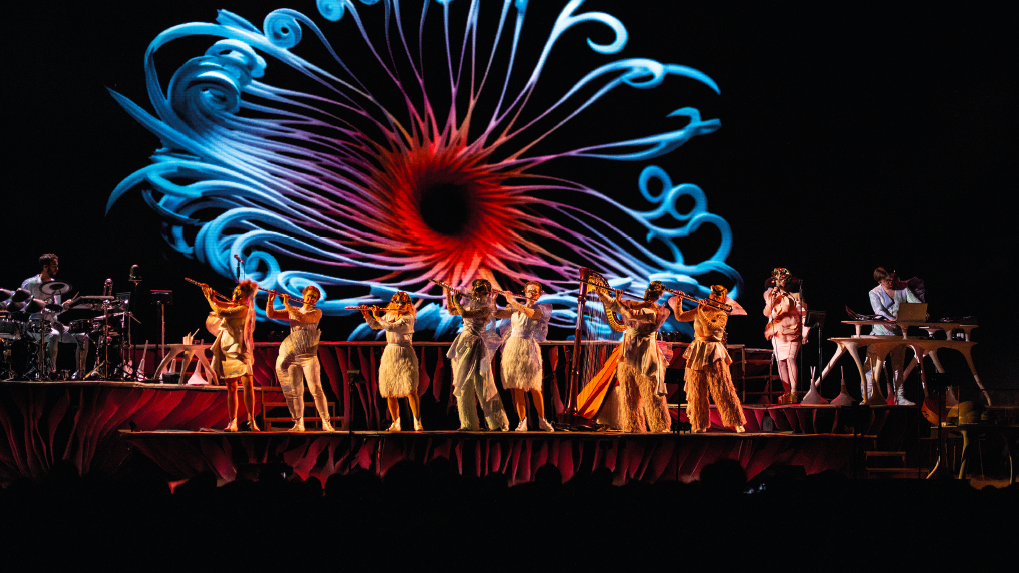 "With Soundscape, you can position an object in the software, and it applies its own reverb algorithms..."

d&b Soundscape acts as a comprehensive sound designer toolkit; and it’s not just a 360 system which achieves this – a 180 proscenium system on the stage front provides much more than the sound of customary right-left setup.

Adding more loudspeakers builds a 360 system to create acoustic environments with En-Space, or the En- Scene canvas can be expanded around the audience.

In short, the aural environments created by Soundscape are audio solutions delivering benefit to all involved ‒ from the sound designer, to the engineer, to the artist, and most importantly, to the audience.

“Exactly,” says Gale. “At one point Björk decides she wants all the flute sounds to be spinning around in a circle around the audiences’ heads, or bird effects specifically flying from one speaker around the room to another, so there’s a lot of marrying things up with the lighting and video department, as well as the video content. She was very keen that we somehow married all the senses together.

"So if I had an explosion sound or drum sound that came out of a single speaker in the room, she might want a strobe right by that speaker to flash at the same time. So we were doing a lot of programming across all departments to make sure that all of the senses were married together in certain songs.”

Gale says the real fun came when they worked out how to make all of Björk’s wishes come true:

“We have seven flute players on stage and they will always be moving around to different positions on the stage,” he explains. “I like to localise the sound of particular flute players to come from where they were standing from their position on the stage, which is really fantastic. At the same time, for some songs Björk wanted the flutes to come from behind, or from the sides – or from everywhere! So each song had a different approach.”

Read the rest of this article in Headliner Magazine at the link below.