The G10 Creamback guitar speaker has been optimised to deliver a classic Celestion Creamback tone, in a smaller 10in format. With a ceramic magnet, a 1.75-inch voice coil, and 45W of power handling, the G10 Creamback is built using the same production methods and materials developed for the 12in Creambacks.

The G10 Creamback Impulse Response’s tone is warm, expressive, detailed and well-balanced, plus, the G10 Creamback guitar speaker has been captured as an IR – an accurate digital representation which provides all the warmth and detail that guitar players love about the physical 10” Creamback.

Each one of the cabinet configurations was recorded by the manufacturer’s sound engineers in a world-class studio, using three pro-grade studio microphones: the Sennheiser MD421, Royer R-121 ribbon mic, and a Shure SM57 – each in six different positions (plus a rear mic for the open back cabs).

All the positions are referred to in the IR files as Balanced, Bright, Fat, Thin, Dark and Dark 2. A Neumann TLM107 room mic was also used to provide additional mic mixes, giving users an impressive range of tonal options.
As with all genuine Celestion IRs, the new G10 Creamback impulse responses are downloaded in .WAV format for compatibility with most DAWs, IR plug-ins and amp modelling software. 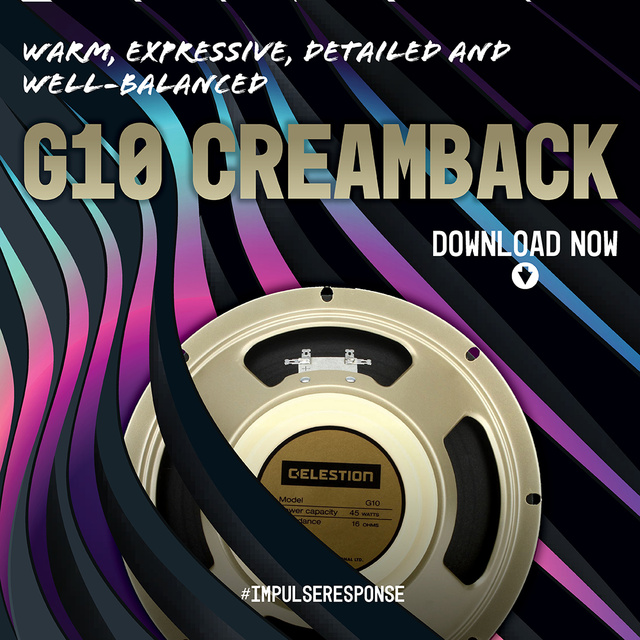 Celestion IRs, which capture the essential behavior of the cabinet in the specific space in which it was recorded – including the frequency and phase response of single drivers as well as the interaction of multiple speakers – offer the user significant benefits. In both recording and live production, Celestion IRs enable the desired tone to be precisely and consistently reproduced regardless of the music recording or live sound environment.

IR users can escape the limitations of a single mic and cabinet setup and explore a universe of possibilities to create the perfect tone. Once the user finds a tone that they love, it can be precisely recreated, in the studio or on the road, time after time. The IRs allow Celestion customers to audition specific models before purchasing one or more physical speakers.

Once the files are downloaded and unzipped, users simply load the IRs into a convolution plug-in in their DAW or into other processing hardware. These formats will work in all known hardware capable of loading IRs, and for the most popular hardware Celestion has already grouped together the correct formats.

Guitar processor manufacturers supported include (but are not limited to) Atomic Amps, Fractal Audio Systems, Kemper, Line 6, Logidy, Positive Grid, Two Notes, Headrush and Yamaha. The Celestion IR files may be downloaded in the sample rate and length appropriate for the hardware being used or as a complete package of all rates and lengths. Certain third party hardware requires the files to be converted into a proprietary format before use.