There is no such thing as a typical day for a leading production sound mixer like Michael Clark; however, we ask him to do his best at setting out his day in the life to us in layman’s terms.

“Being a production sound mixer means that I am recording the dialogue for the production, which sounds pretty straightforward, but as with all jobs on a film set, we have to take on factors and variables provided by other departments,” he says. “As in music recording, we wish to capture the dialogue in as clean an environment that is possible. In a music studio situation, we have great abilities to manage these variables, but in the film world, we have exterior variables that most of the time are uncontrollable.”

Each department on a film set is there to support camera, Clark says, so the focus is on the image, at this stage of production, and on tracking the dialogue:

Furthermore, Clark and co. are also the keepers of sync on a film set, maintaining sync with the cameras being used to keep the workflow consistent throughout post production, with sync boxes and/or with a timecode slate (clapper).

“We are also responsible for delivering a mix feed of the tracks to our video village full of directors, script supervisors, and executive producers,” Clark explains. “Maintaining radio frequencies is also a major concern, as we live in a wireless world, and we at times employ 25-30 wireless devices on our set, between microphones, audio feeds, camera focus devices, and camera video transmissions. As we have the most at stake, and we are usually the only ones licensed, we tend to manage these frequencies." 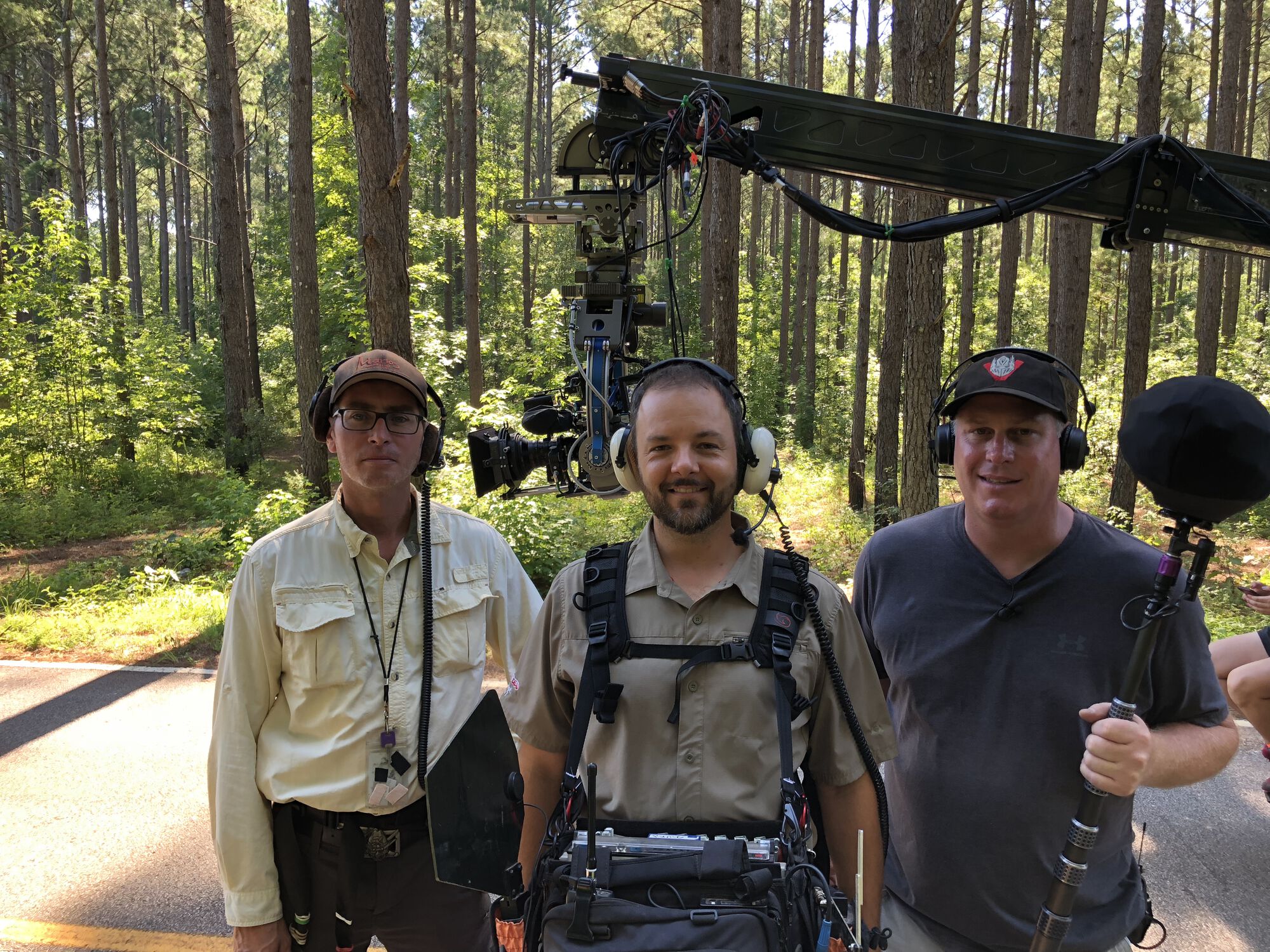 "We are routinely having fans camped out on our perimeter road blocks, all day and night, just to catch a glimpse of our stars."

Conversation turns to the epic US TV series, The Walking Dead, on which Clark has worked for the past seven seasons.

“I’ve been able to witness how a TV show affects people, and their passions towards the art of filmmaking,” Clark reflects, adding that the team are preparing to make season nine. “We are routinely having fans camped out on our perimeter road blocks, all day and night, just to catch a glimpse of our stars. I’ve seen over 200 people stand in blazing Georgia sun, on asphalt, with no shade, for 12 hours, watching us work inside a building they could see into!”

Every day on The Walking Dead is usually in a location in the woods, or on a permanent set piece. At times, the team are driving deep into rural Georgia, an hour or more south of Atlanta, depending on the location. Clark’s day usually starts with him refreshing himself with the script.

“After seeing rehearsals, and understanding camera placement to cover the scene, my boom operator, Kevin Cerchiai, and myself breakdown the scene and decide how we can attack the scene, and capture the dialogue consistently; and my second boom operator, Dennis Sanborn, starts the lavalier [mic] wiring process of the actors that speak,” Clark reveals. “We will always use one or two boom microphones as our preference, and utilise the body mics as backups
for wide angle setups. The toughest part of The Walking Dead is that we shoot three camera setups often; these pairings can drive the headroom too high to cover with booms, and we either work to get matching headrooms on all cameras between discussions with our episode director and our director of photography (DOP), or we rely on our wireless body mics.” 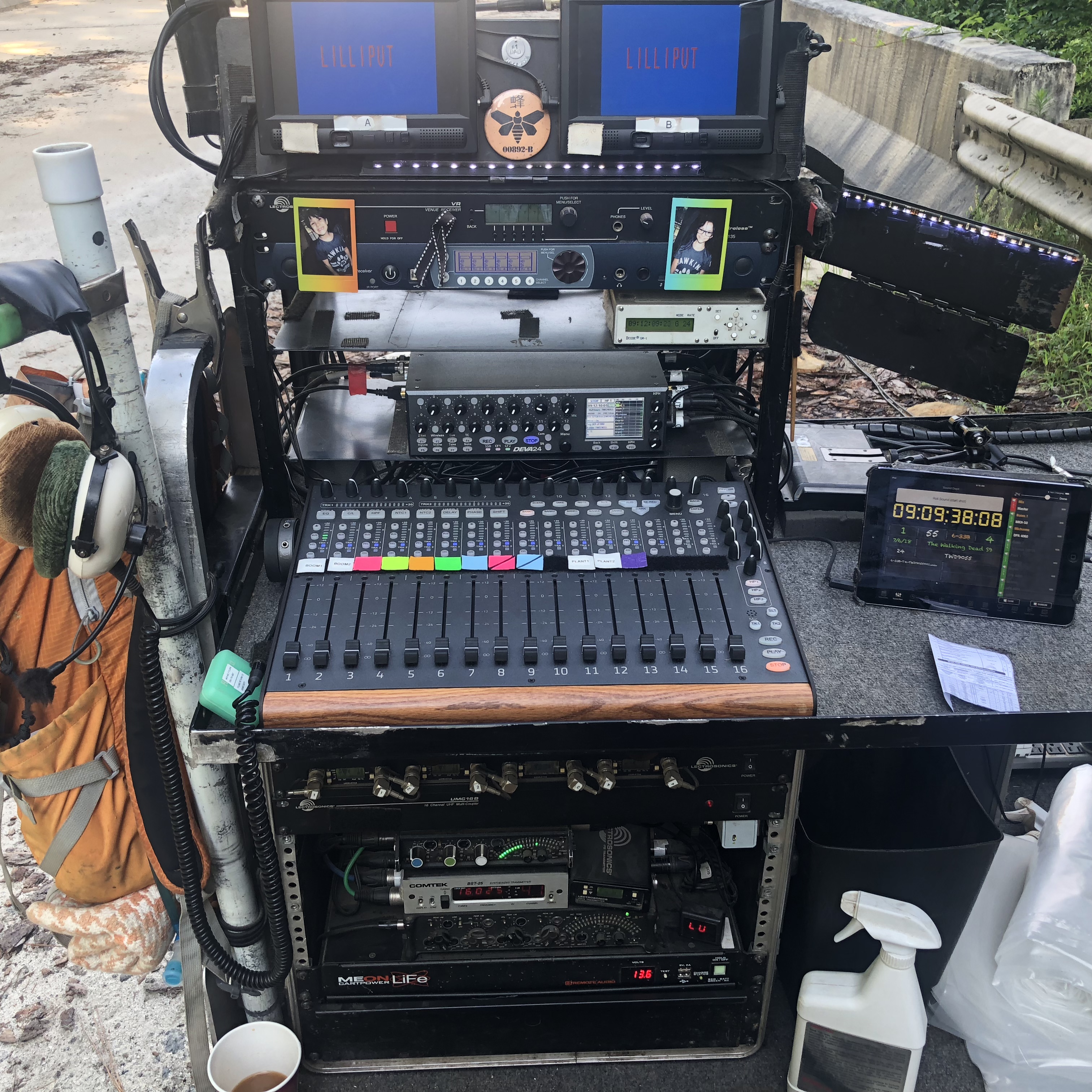 We ask Clark what kind of microphones and wireless kit he is choosing to deploy for these epic audio productions.

“I discovered Lectrosonics wireless when I first started working in Atlanta, with Michael Filosa, as Lectrosonics was the industry leader for TV sound,” Clark says. “It was a time when not many companies invested into the TV side of sound, and Lectrosonics continuously listened to sound mixers, and adjusted their devices to handle the RF interference inherent with ENG style location sound gathering. Lectrosonics still holds strong as the standard in our industry.”

“They are the workhorses in constant use, day in, day out; their robust design has proven long term, as I rarely have to return a transmitter to the service department for repair. And in the fast-paced world of TV sound production, I can’t afford a failure in gear. Having consistently working gear and sound quality ensures that I always capture the best wireless audio possible.”

For body mics, Clark is a DPA man, for what he describes as ‘outstanding sonic characteristics compared to the old standards available’.

“My kit consists of DPA models 4060, 4061, 4061 Core, 4071, 4098, and 4080; each microphone has its own characteristics, and I use each dependent to the voice and/or action of the actor,” he says. “I will use the 4060 on soft
talking actors, as the microphone has a higher sensitivity than the other models, and picks up these lower volume voices without adding Tx noise floors into the signal.

“When we bury the microphones under costumes, we are changing the sonic footprint of our actors’ voices; I find that for men, most sound best on the 4071 when buried under costumes, and I usually get away with using 4061s on female actors when buried, as their vocal signature tends to have higher frequencies that cut through the costumes well.

“I enjoy using the 4061/4071 and Core series for most of our work, as we tend to have dynamic dialogue, and these DPA microphones handle way higher SPLs than what I used prior. These are great additions to this style of TV production. I use the 4098/4080s strictly as plant mics in vehicles; they are compact, and attach directly to the Txs as quick plant tools, and are great tools for small spaces.

Along with a selection of boom mics, all of this kit is connected to Clark wirelessly via Lectrosonics Txs paired with the Sound Devices MM-1.

“It’s for the higher quality mic preamp, with a proper gain staging, so we can avoid the limiters in the transmitters," he explains. 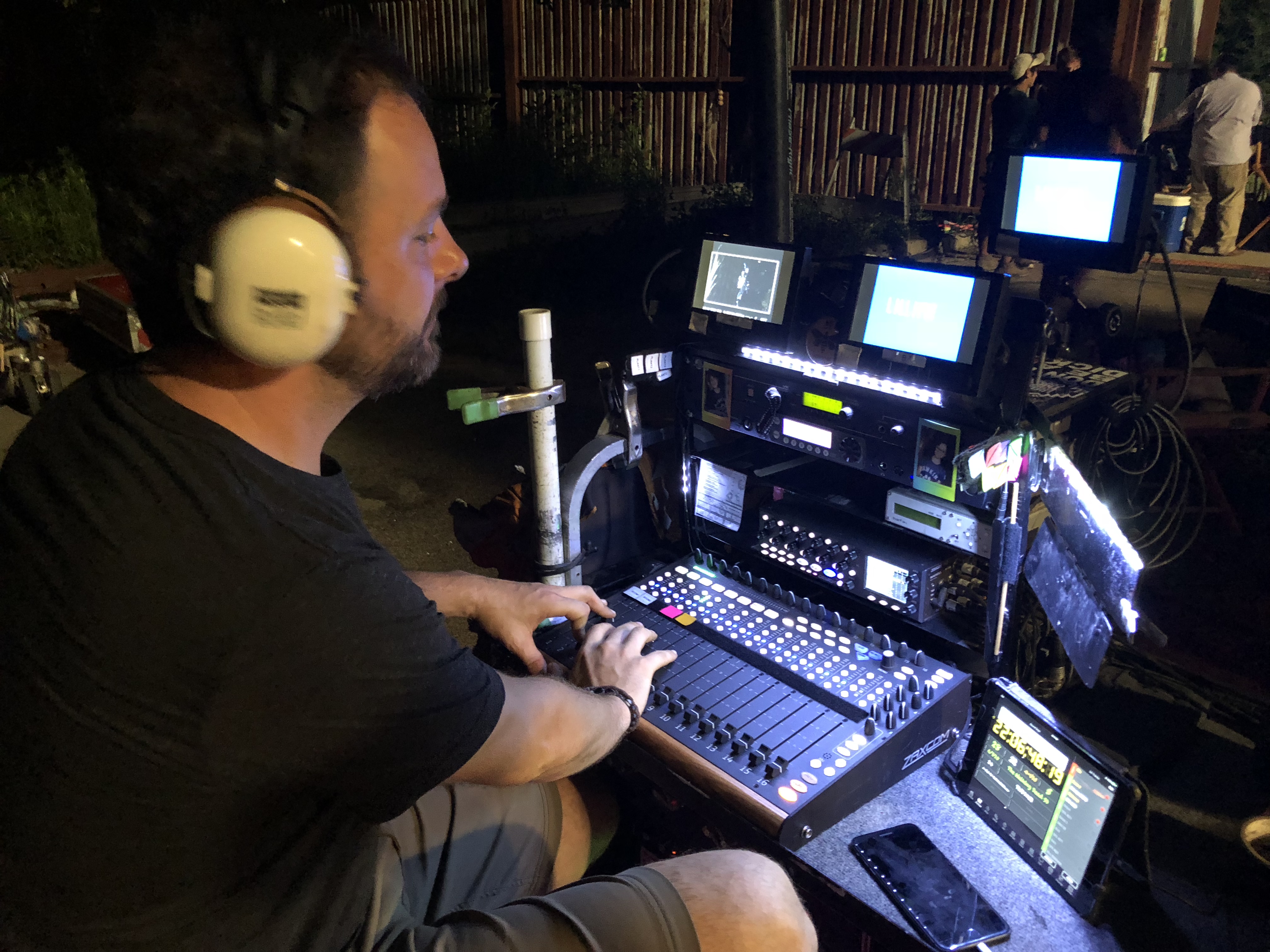 "DPA microphones handle way higher SPLs than what I used prior. These are great additions to this style of TV production."

Every show holds memories that will last a lifetime, Clark tells Headliner. The fact he gets to help create performances that touch the heart, and stir emotions almost every day, is something he is clearly humbled by.

“The greatest part is being able to experience these moments twice: once as we shoot them, and again months later with the rest of the world,” he says. “And the most memorable moments were actually before I ended up on The Walking Dead and Stranger Things - on a documentary called Feasting on Asphalt. While working with Alton Brown on this new travel food show, we traversed the United States laterally from Savannah, Georgia, to Los Angeles, California, experiencing the food available in every region, with down to earth, everyday people this country has to offer.

“I was able to see the landscape of America like I never have before, via the backroads, and no major interstate highways. We developed bonds with our long-lasting crew that we will hold together, forever. And, it ignited my passion for landscape photography that still grows inside of me, today.”

Although there’s something very special in store for us in October, Clark is unable to divulge information just yet. Before we leave him, however, we ask what the most satisfying part of his job is.

“It’s a few things, actually: first, my location changes almost every day; I’m not stuck in a cubicle processing numbers looking at the same three walls day in and day out. Second, we are creating stories that will be told for generations to come - and that impact is powerful. It will create a generational connection that can’t be broken.

“Third, we capture performances that someone pours their energy and hearts into; and when they come back to us, thanking us for not forcing them to recreate their performances in a studio, because of onset problems or equipment failure, is by far the most rewarding aspect of my job, as it tells me, I’m doing the job to its highest level. And that’s the real core of our job... protect the performance!”