The Need For Smaller Kit Is Booming: Meyer Sound SVP On Sweetwater And Market Trends

Meyer Sound SVP, John McMahon, has spoken to Headliner about the US loudspeaker giant’s recent partnership with Sweetwater Sound, as well as the boom in smaller product sales that is shaping the pro audio market.

Earlier this summer, Meyer Sound appointed Sweetwater as a new authorised e-tailer for the company’s range of self-powered loudspeakers, whereby a selection of Meyer Sound products will be available via Sweetwater’s website and catalogue ordering channels.

The partnership will focus primarily on applications for portable sound reinforcement and monitoring in mid to high-level project studios.

Here, McMahon gives Headliner the inside track on how the partnership came to be, the latest industry trends and why Meyer Sound’s studio offering is the market’s “best kept secret”.

How did the deal with Sweetwater come about?

We've been working with All Pro, Sweetwater’s integration branch in Florida, for about five years. One of the key people at All Pro started a dialogue with the team about the direction that Sweetwater has been going, expanding its pro gear offerings. Sweetwater wanted to add to its pro audio loudspeaker line, and he put forth Meyer Sound as a contender. Once the conversation started in earnest, it took about a year to put the deal together.

What makes Sweetwater the right fit for Meyer Sound?

It's the technical skills of their sales team. Their deep product knowledge would be number one. In contrast to say, an Amazon, where the model is just shopping for the lowest price, at Sweetwater, they are there to make sure that you are looking at the right products for your applications. They will take the time to get you fitted into the right product line.

They have an incredible support infrastructure built around their sales team to ensure success. They have a robust sales training programme; every sales engineer spends time training every week. They also provide a gear library where the sales engineer can sign out equipment. If they wanted to do a recording project, they could sign out a set of Amie studio monitors, for instance. They can then speak with authority when they're talking to customers, as opposed to just, "well, the data sheet says this".

There are some nice parallels between Meyer Sound and Sweetwater Sound. Like us, Sweetwater was founded in 1979, and is a privately held U. company. Sweetwater’s mantra is, "do the right thing"— for the customer, for colleagues, for the company, for vendors. They really put doing the right thing ahead of making money, and that really resonates with our approach to doing business.

What kind of opportunities does this deal open up for Meyer Sound?

Well, there are two categories here. There are the individual consumers we don't normally reach - what you might call the hobbyist, or the amateur musician. Maybe they want to get into DJing weddings, and they want a high-end, high-performance system that they can charge a premium for.

Then there are applications or projects where people want to be able to buy directly. That's not our model; that would overwhelm us. One example is small churches. They don't want to involve an integrator or consultant for whatever reason, but they want access to the product.

Small projects like that can be serviced by Sweetwater, and anything bigger can be sent over to All Pro to serve as an integrator. But sometimes, people just want to be able to buy gear without having to fuss around.

What does the deal mean for Meyer Sound’s studio business? Will the partnership help increase awareness of the company’s studio products?

Our studio products have been doing really well recently. Specifically, the Bluehorn System studio monitor has been a shining star in post-production and content creation. So, we have the high end of the market, and bringing Amie, our new studio line onboard at Sweetwater will bring awareness to the rest of the studio market. We've seen a lot of success in small-format scoring stages, the production spaces that are small, editorial suites, people creating content for Netflix. It goes on and on. There's just so much democratisation of creative content these days that the need for smaller equipment and access to that equipment is booming right now. And this is a great path for us to get into that channel. 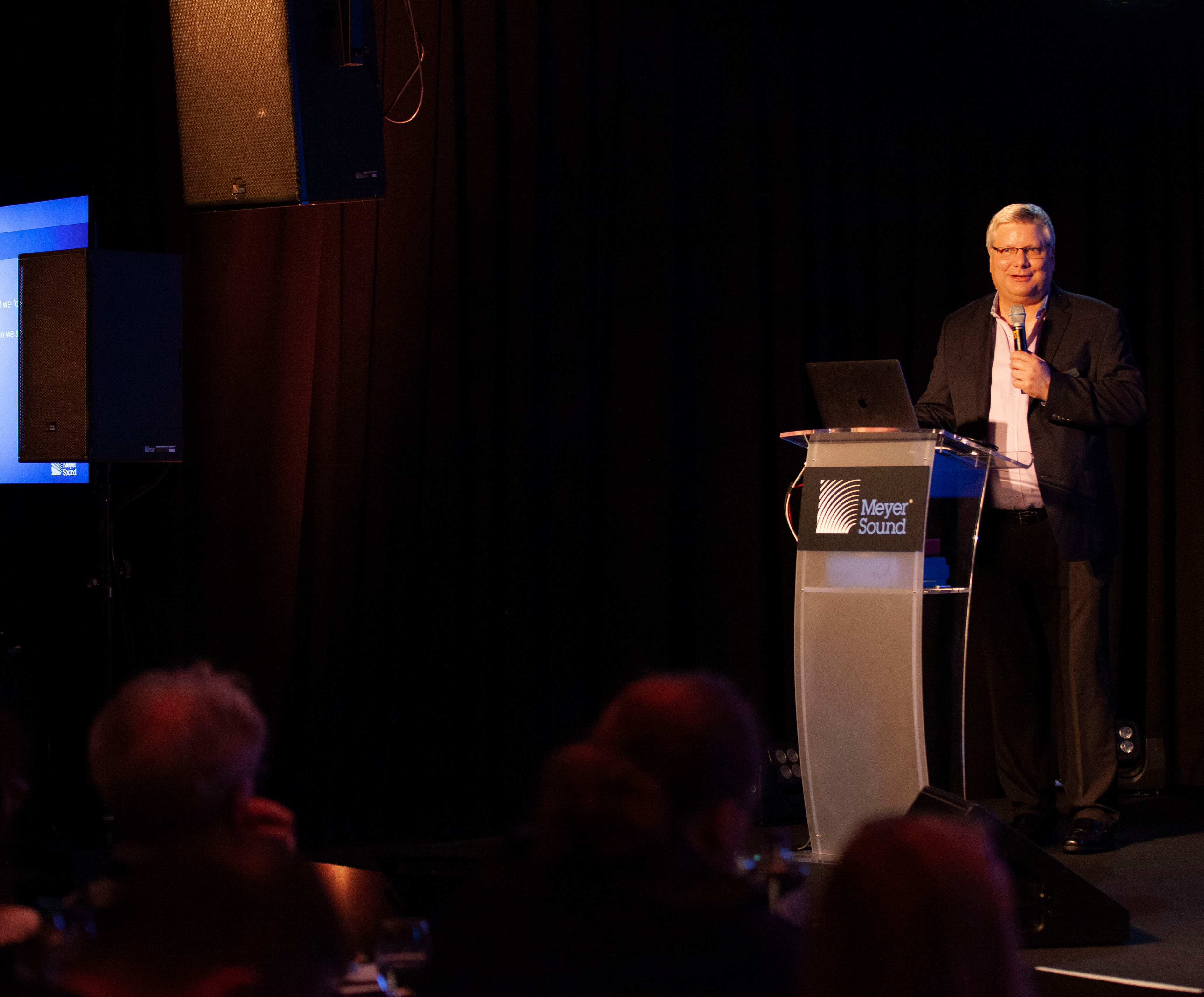 What type of sound-reinforcement products or applications benefit most from this partnership?

We're highlighting the Amie studio packages, but we’re also including small-but-mighty power couples: Our ULTRA-X40 Compact Loudspeakers paired with a 750-LFC Very Compact Low Frequency Control Element, our ULTRA-X20 Compact Wide Coverage Loudspeakers with our USW-112P Compact Subwoofer. Even getting into our LINA Very Compact Linear Line Array Loudspeakers. These bundles are completely plug and play. They work right out of the box; you don't need a processor, you just literally roll them up, plug them in, and go.

We think those are the right kind of products for the Sweetwater customer — whether that’s a house of worship that wants to bring in a new PA, or a band that wants a small PA that they can tour with, or a singer songwriter performing at coffee shops.

When the news of the partnership was announced, you were quoted as saying that the company is looking at a new approach to consumer marketing. Please can you elaborate on this and tell us about your strategy to reach more customers?

We like to joke that we’re the industry's best kept secret. In the pro space, we're extremely well known, well regarded, historic, all those things. But to musicians, artists, and the wide range of people that make up our industry, we're largely unknown. I think that having this exposure with Sweetwater will really help build broader brand recognition.

One of the comments on our Facebook page after the Sweetwater launch was, "I used to take around my Meyer Sound PA and people would hear it and say, 'Oh my God, those speakers sound amazing. Who makes them?' I would say, ‘Meyer Sound.’ They would say 'Who? I've never heard of them.' Now, I’ll never have to say that again. "

How is Meyer Sound’s live business looking for the remainder of 2021? With lockdown restriction easing, will you be looking forward to a busier second half of the year?

Absolutely. We've had a terrific summer, order-wise, and we've seen the business really picking up. We're seeing more business with the smaller-size systems than on the really big systems. LINA and LEOPARD loudspeakers are doing really well, as well as the ULTRA-X40 and ULTRA-X20 loudspeakers.

I think the live business is going to pick up principally on the smaller side as we march into next year. That's when we'll start to see some of the bigger production companies start to reinvest, but they have to make it through this year first.

How vital has your work in the studio and installation markets been in seeing you through the most difficult periods of the pandemic?

Extremely vital. Last year, we had our best year ever for orders of our Constellation acoustic systems, for example. Also, business really took off as it seemed that the sun, moon, and stars aligned when it came to a lot of folks investing in big studio projects.

What’s next from Meyer Sound? Will you be making any more strategic announcements or launching any new products over the coming months?

We're looking forward to getting out and doing roadshows and attending events like InfoComm and seeing everyone again. That's really one of the things that our industry has been missing: the face-to-face, personal connections that we make and the relationships that are so important to us and the way our business works.

On the product side, there’s nothing that I'm ready to talk about yet, but we've been very busy, we've got a great R&D pipeline, and we're excited to share some big news this fall.