Todd Weaver: On set on revenge movie 'The Menu'

When production sound mixer Todd Weaver first got the call to work on the upcoming Mark Mylod-directed film, The Menu featuring an ensemble cast including Ralph Fiennes, Anya Taylor-Joy and Nicholas Hoult, he knew it was going to be a challenge.

“The producer called me about doing The Menu, and he told me a synopsis and then expressed the director’s desire to capture all of the actors’ ad libs in every scene at all times,” Weaver recalls. “I knew it would be a challenge, and started devising a way to accomplish this goal.”

The black comedy stars Taylor-Joy and Hoult as a young couple who travel to a remote island to eat at an exclusive restaurant at the invitation of a revenge-bound chef (played by Fiennes), who has more in mind for his guests than just a gourmet meal…

“The biggest challenge we faced was that there could be as many 16 to 18 actors all speaking at once,” explains Weaver.

“It’s an ensemble cast, with basically four groups of guests and then the chef who’s messing with everyone, so you see all their reactions in succession. The cameras are just raking across everything, especially during the wide shots.”

“The pace and the manner in which we shot The Menu was vastly different from the way modern streaming episodic television is shot, and the cast count made it a different process from wiring just one to six actors at a time for films like I,Tonya,” he explains as a comparison. 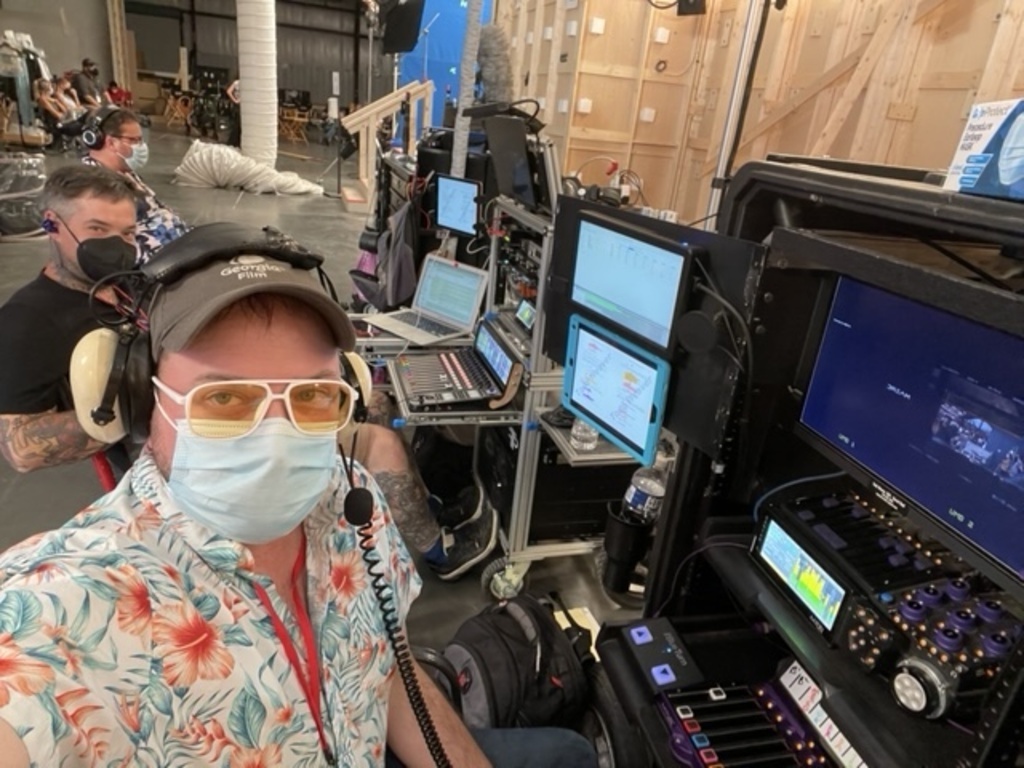 “Every evening at wrap, my utility, Billy Lyons, would clean and place new batteries in the wiring rigs for each actor and place them in labeled ziplock bags. In the morning he would wrangle all of the talent somehow.

"He would find them in their trailers, outside smoking, at the craft service, in their cast chairs, or wherever they might be, and get up to 20 of them wired with freshly coordinated frequencies while never having production wait for that part of the process. If there ever was a delay, it was not because of sound,” he grins.

“Lectrosonics’ Wireless Designer was essential to be able to get everything RF coordinated quickly before Billy had to place the transmitters on those many cast members.”

For this project, Weaver deployed a combination of Lectrosonics’ Digital Hybrid Wireless and all-digital line. On the Hybrid side were original Venue receivers plus SSM micro belt-pack, SMV, and SMWB wideband transmitters.

Heading up the digital arsenal were DSQD receivers and DBSM transmitters. Thanks to Weaver’s Dante skills and Wireless Designer software, this diverse roster of gear functioned as a seamlessly integrated system.

“We used Wireless Designer to integrate everything and frankly could not have done the movie without it,” he states.

“The way it worked was, the DSQDs have Dante built in. My old-school Venues were controlled over our LAN via an Extron RS232-to-Network IP link. We ran audio from the Venues into a Ferrofish analogue-to-Dante converter.

"This way, every single channel on the set was on Dante in the same bucket, and from Wireless Designer I could find frequencies for all the channels. I used all my transmitters.”

When we would send our deliverables to post-production, they’d ask me ‘How in the heck did you mix all this?

In fact, all of Weaver’s transmitters were not enough, so he brought in a second sound mixer, Jason Sullivan, who was also equipped with Lectrosonics kit, including two racks full of SRc receivers.

“He mixed another four to six tracks on top of my 12 to 16, but thanks to Wireless Designer and Dante connectivity, everything was in the same bucket. Without Wireless Designer overseeing all this, it wouldn’t have been possible.

"When we would send our deliverables to post-production, they’d ask me ‘How in the heck did you mix all this?’ They couldn’t believe we did it.”

Several scenes filmed on the water presented a secondary but simultaneous need: range.

“We shot all the boat scenes on the water, boat-to-boat,” he explains. “We had a follow boat and were told the talent boat was only going to get about 20 or 30 feet away. It was more like 200 to 300 feet! Still, I got a nice, clear signal on everything.”

“Lectrosonics holds up under abuse,” he nods. “I’ve seen them fall from trucks. I’ve seen actors swing them around by the microphone cable. You can drop them, and they can withstand a reasonable amount of moisture.

"Once on Stranger Things, we were doing a Halloween trick or treating scene and one of the kid’s ankle straps came loose. He dragged that pack all the way down the street, which ate the finish off it, but it kept on transmitting and we kept on recording!”