Aside from the perfect guitar, a great-sounding amp is arguably the most essential factor in determining your guitar tone. That said, professional-level combo and stack amps are notoriously expensive, heavy and prone to damage.

Is there a way to overcome these issues? Digital emulations have come a long way in recent years, but are they good enough to justify ditching the physical rig, and going for an all-digital setup?

Can a virtual amp really deliver the tone of a sweet-sounding Fender or a heavy-hitting Marshall stack? Will anyone notice the difference? What virtual amps, if any, sound the most convincing?

In the world of recording guitars or performing live, we can all agree that tone is king. In the article below, we'll help you see the wood from the trees so you can start developing your sonic signature as a guitar player or producer.

On the one hand, we have the classic amplifier brands, such as Marshall, Orange, Vox and Fender whose unmistakable sound has come to define the sound of electric guitar and bass from the mid-twentieth century to the modern-day.

On the other hand, we now have countless plugins and amplifier profilers/modellers that seek to deliver the sound of classic and modern amplifiers with the convenience of digital processing.

Plugins, which can be used in a digital audio workstation (DAW for short), have come a long way over the past ten years with key players, such as Waves and Native Instruments, hard at work creating tools to use in Logic, Pro Tools or Ableton Live.

Throughout this article, we will refer to these plugins as simulators. Then, continuing in the digital realm, companies such as Kemper and Fractal manufacture hardware modellers. These rigs are incredibly popular with touring musicians who require a portable alternative with incredible flexibility.

Real amps, simulators or modellers? Let's take a closer look at each before we compare. 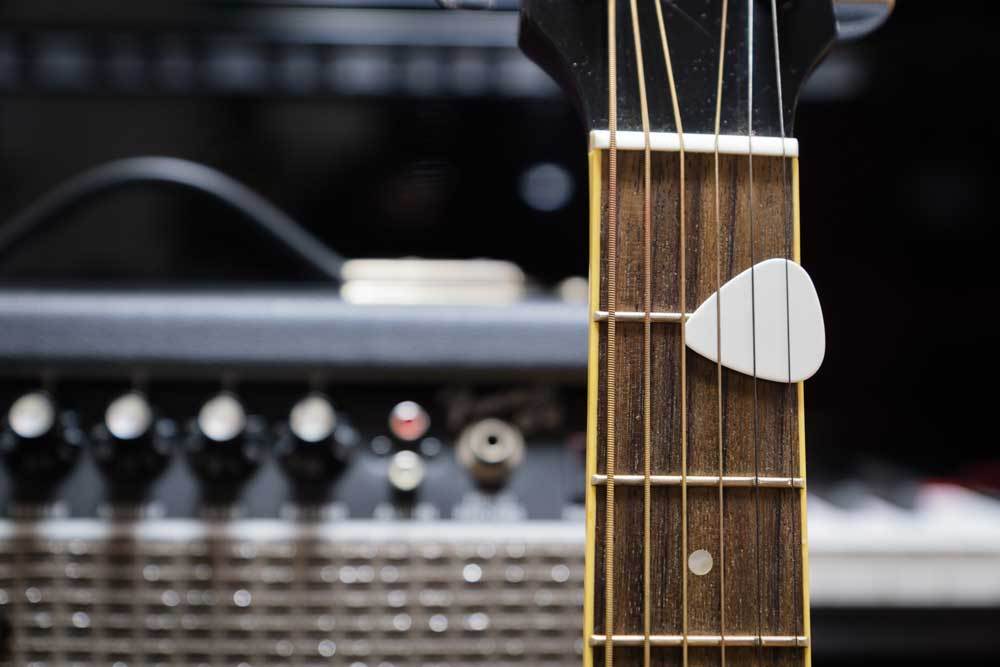 Keeping it Classic with Amplifiers

While virtual amps continue to gain credibility as a feasible alternative, real amplifiers certainly won't be fading from the shops or stage anytime soon.

Having developed from humble beginnings as a PA speaker to their modern-day iteration as the cornerstone of rock music, there's still a lot to be said for the authenticity of the real thing.

The concept of how an amplifier works is simple and important to understand when comparing them with virtual amplifiers...

In short, an electrical signal travels from the guitar pickup to the amp, where it passes through either transistors, semiconductors or tube amps, each has a different and distinct tonal characteristic. From there, it is sent to the loudspeaker and, by extension, out to the audience.

While this is a simplified explanation of how amplifiers work, the basic signal flow from pickup to speaker is the key factor to keep in mind...

The pickup takes in an electrical signal from the strum of the guitar strings, and the tubes, transistors or semiconductors enhance that sound, following which the speaker pushes the sound out to its audience.

Analogue processes add colour to the sound, often in a pleasing and musical way. The recent resurgence in consumer interest for vinyl records is another example of how the "character" of analogue sound is so endearing to many music fans. Aside from the sound characteristics, the physicality of a medium like vinyl also plays a part in its appeal.

The same can be said for guitar amps and why so many guitarists swear by using the real thing and will likely never make a complete transition to simulators or emulators. For many guitarists and producers, the authenticity of a real amp and the process of physically dialling in the right tone simply can't be replaced by digital 1s and 0s.

Naturally, to record a real amp, you also need to have some understanding of mic selection for electric guitar and placement in order to either record your amp or hook it up to a PA when playing live. This, too, adds to the sound quality of an amplifier as the sound of moving air, or a microphone capturing real sound waves is one of the trickier elements to replicate in an all-virtual setup. The best amp simulators will mimic this digitally, to some extent. 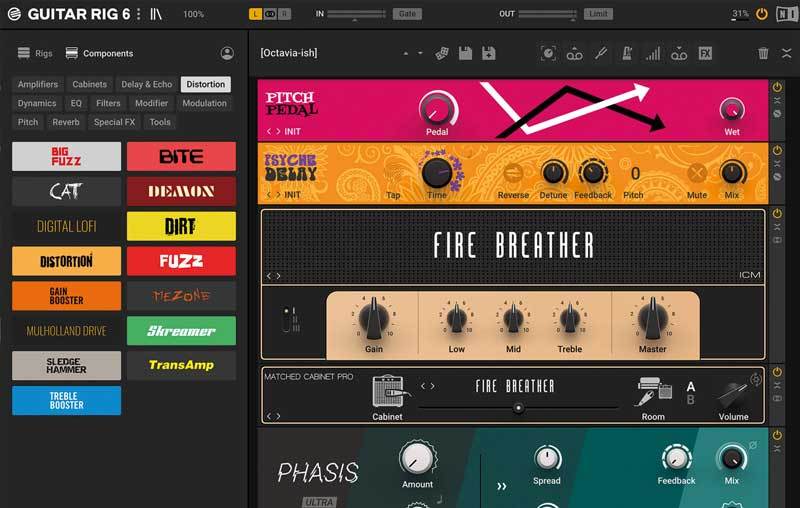 Many modern DAWs, such as Logic or Ableton Live, come bundled with their own amp simulator plugins. The quality of Logic's amp simulator has come a long way, but you might still find these sometimes produce a thinner, less bright tone than a real amplifier.

For the best results, consider checking out specialist plugins from Native Instruments, Brainworks or IK Multimedia. These purpose-built programs offer a more sophisticated and professional sound for those seriously considering going fully '"in the box" when recording guitars.

The main appeal here over real amplifiers, of course, is convenience and price. You can quickly build a classic Vox AC30 simulation in just a few clicks and start laying down riffs—all without annoying your neighbours with 30 watts of all-valve power cranked up to 11...

These plugins are also incredibly cost-effective compared to hoarding various different amplifiers. For the price of a cheap practice amp, you can quickly emulate countless pro amp rings and effects, which, compared to shelling out thousands for a single amplifier, could be enough to convince you to go all-out digital.

If you concentrate on post-processing, then these simulators are more than capable of producing a professional recording.

Eventually, however, you might find you want to give your sound more depth. In this case, you may find such simulators to be slightly limiting. The next section may help with this. 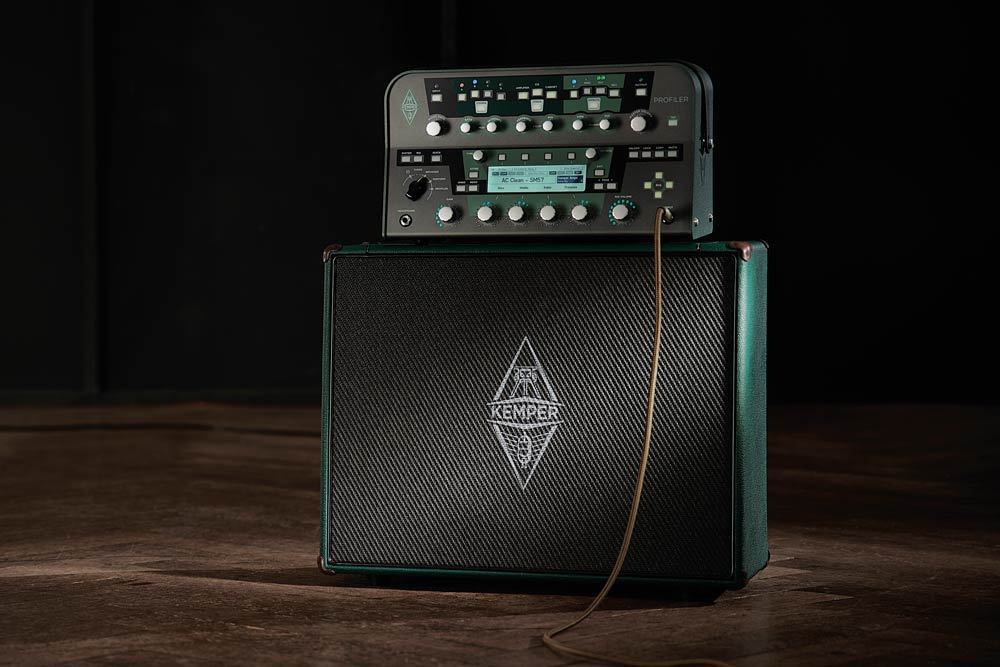 One of my all-time favourite modellers is Kemper. They refer to their method of amplifier emulation as profiling, and what you get with Kemper, unlike a plugin, is a physical piece of gear.

The Kemper is a box that allows you to store hundreds of amp profiles so you can recall them at any time. It is entirely digital, and, since its creation over the past decade, more and more musicians have included them in their touring rig, such as 30 Seconds to Mars, Blink 182 and Enter Shikari.

Online you will find videos that do blind tests of the Kemper emulations vs real amplifiers. It's a tough comparison as Kemper is known for producing a very similar sound to its real-world counterparts.

Further to this, you are able to design your own sounds; if you have an amp you love but can't take on tour, then you can spend some time profiling that sound into the Kemper.

A Kemper modelling amp is a single purchase that gets you a few hundred different amp sounds. It does, however, come at the hefty price tag of at least £1,600.

Kemper certainly isn't the amp for everyone to start with, however, many musicians grow into it as they look for something more compact and flexible. Over the past decade, Kemper has made a big advance into the world of guitar amplification and cemented itself as a key player.

Virtual or Real Amps - Which is Best?

As with everything in the world of music, the answer is highly subjective. There are advantages and disadvantages depending entirely on your needs as a guitarist or producer.

The classic guitar amp will never disappear, and even if you are leaning toward the world of the digital, it won't do any harm to get acquainted with real amps. By understanding the equipment plugins and modellers are emulating, you gain better knowledge of how to work simulators or modellers. Real guitar amps can also be fun to use; working real dials and controls helps you connect with your tone in a more tangible way.

One great upside (and occasional downside) to real amps is, of course, noise levels. Valve/tube amps, in particular, need to be driven quite hard to achieve the best possible tone. At lower volumes, your tone may often sound thin and lifeless.

Both simulators and emulators can offer you a big sound at manageable volume levels. (Handy when you're writing the next rock n roll stadium anthem).

If you're new to amp simulation, it's worth starting with a few affordable plugins before you commit to the expense of a Kemper modeller (or similar). Many of the big players previously mentioned run regular promotions, so it's worth keeping your eyes peeled.

Let your ears be the judge, weigh up the pros and cons based on your budget and your room for potential compromise based on factors such as portability and playability. If budget permits, you might not have to choose, giving you the best of both worlds.

When all is said and done, a great guitar player will squeeze the best out of even the most humble of rigs. Work on your craft, and evolve your tone over time. Most importantly, enjoy the journey.