Warner Chappell co-chair and CEO, Guy Moot, has spoken to Headliner about the publisher’s work with award-winning music charity The Music Works, what needs to be done to break down music industry barriers, and his own personal journey from working as a welder to becoming one of the most influential executives in the business.

The Music Works is a Gloucestershire-based charity designed to open up access to the music industry via education and networking opportunities, with much of its work focused on those facing significant social and economic challenges.

The organisation, which is currently working with 2,500 young people aged 8-30 on a regular basis, and a further 2,000 via its extensive events programme, recently hosted an industry networking lunch and roundtable discussion with Moot, in which attendees could ask questions about the opportunities open to them and the practical steps they can take to kickstart their careers.

Headliner caught up with Moot and The Music Works artistic director, Malaki Patterson, to find out about the challenges facing young people looking to embark on a career in music and what they can do to overcome them…

Tell us about your involvement with The Music Works and the recent event, Guy?

Guy: When I first heard about The Music Works it really resonated with me because I was a Gloucestershire lad. I had a very unlikely story, and those barriers were there. When you grow up in Gloucestershire you can be close to everything and not near anything. I was very lucky with my journey to get to where I got to, and there were no places like The Music Works or people to reach out to, no careers advice in terms of how to access the music industry. So, it resonated with me and my story.

We often find that there is a disconnect with the music industry and certain communities, particularly in more rural and provincial places, in terms of talking about opportunities in music. Whether that’s in the creative side, such as becoming a songwriter or an artist, or choosing a career in the wider industry, whether that’s in publishing, promotion, or studio engineering. Events like this allow the community and aspiring young executives, musicians, and people who just want to know more about how they can further their career in music in general to meet. The Music Works provides that environment.

I went there with some of our team and friends in the business just to talk to people and offer advice. We are always looking and recruiting, and we don’t always want to recruit from the same sources. I was so impressed when I first went there. Multiple studios, people recording, people learning, music engineering, there is music therapy. It’s incredible and it demystifies this walled city that sometimes the music industry can look like.

Malaki, how does The Music Works work, and what was the main focus of the recent roundtable event?

Malaki: The Music Works helps young people transform their lives through music. We know the power music has on young people and we use that to help them through whatever challenges or barriers they have in their lives. 50% of our work is with young people in challenging circumstances, so that can be people suffering with mental health issues, young offenders and young people unable to find access to the music industry, whether that’s because of affordability or education.

We go into schools and deliver music technology programmes on iPads for children as young as eight, through to people 25 years of age. We also have an artist development programme working with people aged 18-25 where we help them get into the creative industries. Plus, we do a lot of outreach work into communities, which we signpost back into our music studios, and then we do targeted programmes and open access programmes, so all young people can benefit from music tuition and music activity, right the way through from first access to a creative career.

The event last week was around breaking down barriers and demystifying the music industry. There is a lack of opportunity in Gloucestershire in terms of people attaining a creative career, and there is quite low aspiration because of that; there are a lot of young people who don’t know how to go about starting a career in music. We’ve been working with Guy and Warner Chappell for the past year, and we’ve been doing some online masterclasses. It’s been great to get Guy and the team down face-to-face so that people can ask questions and gain a greater insight into the music industry. 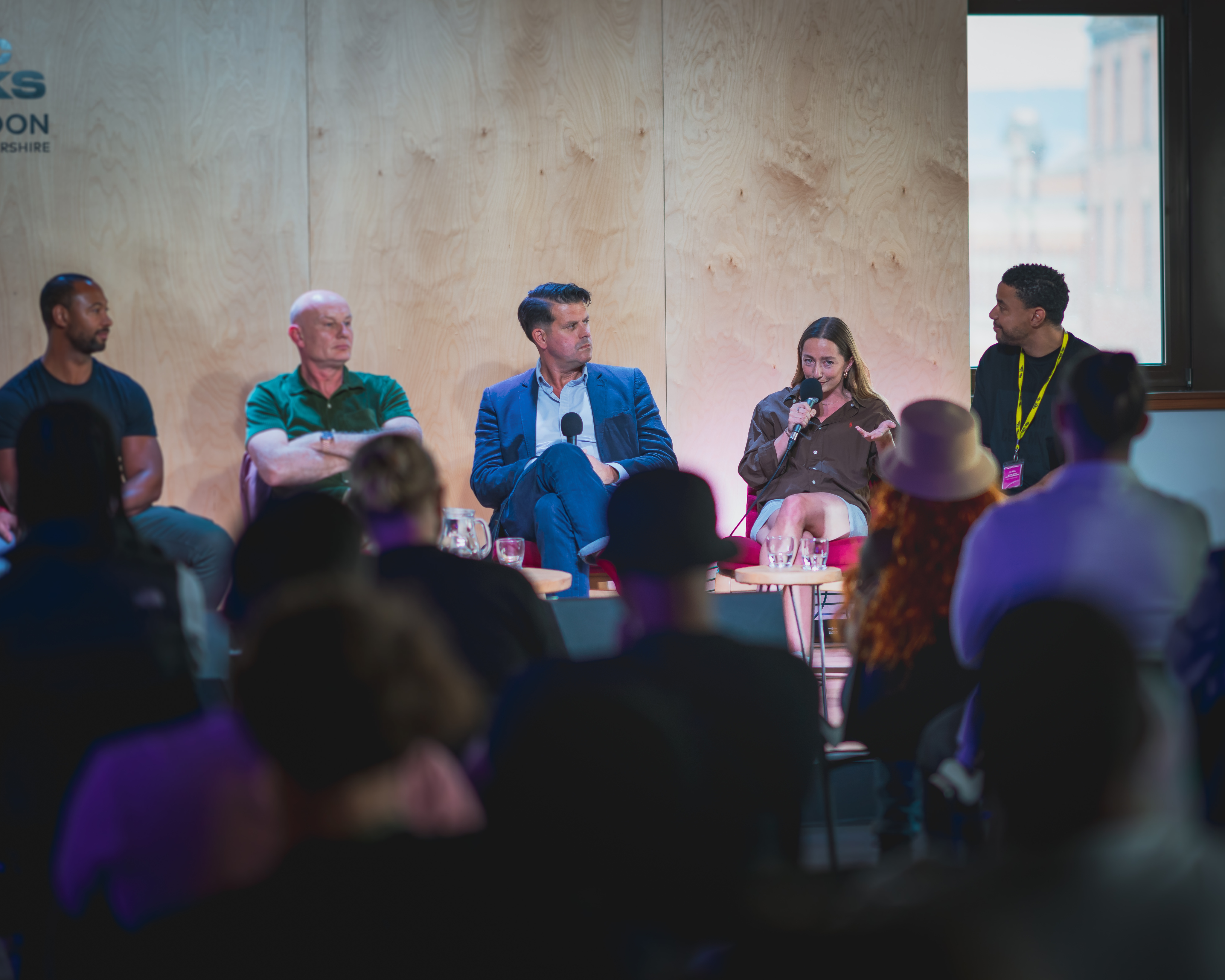 Let's make things easier for people than it was for me when I first started. Guy Moot, CEO and co-chair, Warner Chappell

How big a barrier is the lack of awareness around the variety of roles available in the music industry?

Guy: Huge. There is a big disconnect - what’s sync licensing? What is an A&R person? The music industry is a big employer, down to the person who is a trainee engineer making tea in the studio, through to the junior club booker. A lot of music education is about ‘we’re going to school you to be a star’. There are so many ways of, for instance, monetising music, whether it’s film scoring, production music, composing music for games. And on the music industry employment side, there is clearly a lot we need to do to connect with people in education and careers officers. There are so many opportunities in the music industry that I don’t think are explained very well at that level.

What are some of the most common barriers and challenges facing young people looking to make a career in music?

Malaki: There are multiple barriers. Education is definitely a key one because young people are just taught about music creation in schools. Also, in schools, music education is generally focused on very traditional instrumentation. You can only take GCSE music if you play an instrument. A lot of music creators are making music with software.

Guy: It’s also about how we communicate and get to those people. I didn’t leave school particularly well qualified. And I was lucky to find my way, but to join the music industry you don’t necessarily need a string of qualifications. What we need is a passion, a drive for music, the wish to work hard and have ambition. The rest we can probably teach you along the way. We just have to find a way of reaching people, and The Music Works is helping to do that.

Tell us about your route into the industry, Guy, and how you have gone on to become one of the industry’s leading executives?

Guy: Luck plays a big part. I wasn’t stupid at school, I just didn’t have a lot of patience for school. I left and became an agricultural contractor, which is a posh term for tractor driver. And then I was a welder. The farming thing was a bit seasonal, so I was a welder for a couple of years, which was incredibly tough. And I wasn’t a particularly great welder… but I did have a love of music.

I managed to get a job in a record shop, which was initially in Banbury, and then I moved to Cheltenham to manage a record shop. I got to know a lot of sales reps and I went out and hustled. I was going to shows all around the area, which wasn’t easy because of the lack of venues. I was often driving all over the place to see gigs, and I started sending gig reports to various record companies. From that I managed to get my first talent scouting job, starting with just a phone book and telephone. Then it was driving around the country and getting to know all the local players. It was incredibly time consuming but incredibly rewarding.

What can major labels and publishers do to make the industry more accessible?

Malaki: I think things like what Warner Chappell are doing – they reached out and offered to help. They’ve taken time out to come to our areas and talk to the local community. It’s for the record labels to reach out to organisations like us and do whatever they can to support these kinds of communities.

Guy: For us it’s about getting out into the provinces. I can’t speak about the rest of the country, but The Music Works feels like a template for how we should be reaching out to various communities. People can come to one focal point and meet the industry. And this isn’t a kneejerk thing, like, ‘hey, look at us’, it’s a sustained effort to collaborate. You want to see those stories of executives coming through and talent being developed.

It’s really important we continue to support the organisation and work with young people to demystify what goes on in our business. I wasn’t that proud of my rural past and my academic record, but life is a journey of reconciliation of who you are and where you come from. And it’s amazing how many people have similar stories, so let’s make it easier for people than it was back when I first started.

What advice do you have for young people keen to pursue a career in music but don’t have an organisation like The Music Works on their doorstep?

Guy: There is more out there. There are education opportunities. Research, send emails, get in touch with people. I always used to have loads of people writing to me saying ‘how can I become an A&R person’? And I used to appreciate that. But I don’t get that anymore, which says to me that as an industry we need to do more reaching out about the many facets of the music industry and promote ourselves a bit better. It’s a two-way street. But be ambitious and hustle.

Malaki: There are things out there, you just have to look. Find your community. Strength is in numbers sometimes. That’s what we did with The Music Works, building that community and now we have a plethora of young emerging artists and music industry professionals, and people are working together and collaborating. That is what builds a music scene.