What is the Proximity Effect? - Is it Good or Bad?

The proximity effect is a phenomenon in directional microphones where low-frequency response increases as you move closer to the source. Where desired, it can enhance the sound of your recording, but in the wrong context, it can also hinder sound quality and intelligibility.

Which Microphones Produce the Proximity Effect

Some modern dual-diaphragm cardioid designs attempt to control the proximity effect in a way that tunes the microphone response and mitigates the problem, but as a rule of thumb, proximity-related bass response is a fact of life when using a directional mic.

Pros and Cons of the Proximity Effect

The proximity effect is both your friend and enemy when it comes to audio production.

When recording vocals for music production, it's a little different. In this case, too much low-frequency energy from the proximity effect could make it harder to sit your vocal within the context of a full mix. Too much energy below 200Hz could clash with the kick drum or bass guitar, resulting in a muddy-sounding mix and reducing the intelligibility of your vocal track.

When bringing together an entire mix, we need to consider the bigger picture. A nice rich vocal with some proximity effect might sound great in isolation, but when combined with a full band, it can easily muddy up the low end.

The same applies for electric and acoustic guitars; low frequencies can add warmth or fullness to a recording, but it's important to make sure each instrument occupies its own space in the frequency spectrum and has room to breathe. Acoustic guitars can sound very "boomy" if there's too much proximity effect—particularly if the mic is placed too close to the sound hole.

Things are quite different when we're mic'ing low-frequency instruments, such as bass guitars, a kick drum, or a bass synth. Here, we can use proximity to our advantage to "fatten up" a mix.

When we understand what the proximity effect does, we can use it to tune our recordings to our benefit. For example, if we're looking to capture a source that sounds a little "thin", utilising more proximity effect can add depth. Since figure-of-eight polar patterns exhort greater proximity effect, this is something we can use to our advantage in many cases.

In summary, you can think of the proximity effect—and experimenting with on or off-axis mic placement—as a pre-EQ way to shape the character and tone of your recordings or live sound reinforcement.

The first microphones were either omnidirectional or bi-directional.

Eventually, engineers discovered they could create a cardioid polar pattern mic by combining a pressure mic with a pressure gradient mic.

A pressure mic has the same polarity from all sides, while the pressure gradient mic has positive polarity on the front and negative polarity at the rear. If sound arrives at the side of a bi-directional mic, it creates an equal signal on both sides that is 180 degrees out of phase with each, resulting in a complete phase cancellation of the signal.

Shure engineer Ben Bauer was the driving force behind the world's first single-element cardioid design when he began developing the first Shure Unidyne capsule in 1937.

He learned that by partially blocking the rear of the microphone capsule, you could create a directional cardioid polar pattern using just one microphone element.

This ported design resulted in a delay between the sound entering from the rear and sound striking the front of the diaphragm. By varying the amounts of acoustical resistance encountered at the rear openings, it became possible to achieve cardioid, supercardioid, or hypercardioid patterns using a single element.

The proximity effect occurs due to phase and amplitude variations of the sound waves arriving at each side of the microphone's diaphragm.

The overall sound level increases due to the closer proximity of the sound source to the mic, but higher frequencies are cancelled more than lower ones by the mic at this distance.

There's more physics to explore here that go beyond the scope of this article. The proximity effect occurs, in part, because the difference in phase between the sound hitting the front and back of the capsule is smaller in the low frequencies than the higher frequencies.

The proximity effect becomes less pronounced if we tilt the microphone off-axis; this is because, as we do so, we are also reducing the distance sound has to travel to hit the capsule rear. Moving off-axis also affects the overall sensitivity and tonal balance. 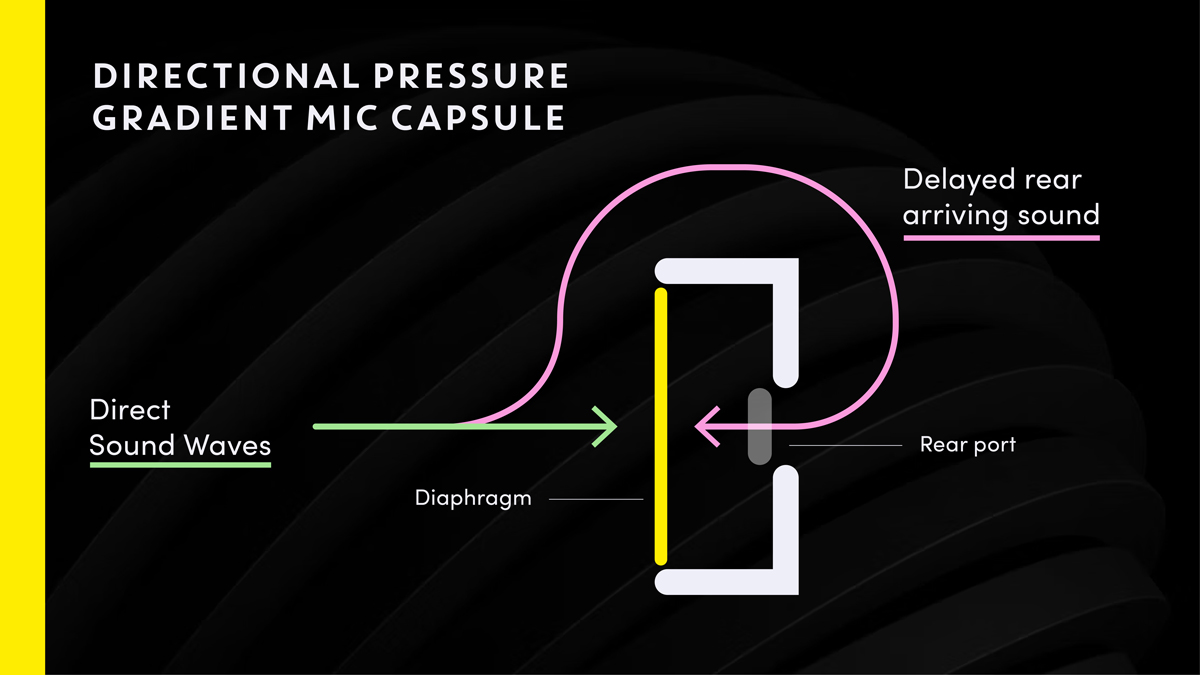 As with all audio applications, context is key, so it's important to use your ears and decide what works depending on the sound source you're capturing the desired outcome.

Omnidirectional microphones typically sound much more natural and balanced across the frequency range, but then the acoustical environment starts to have a much greater bearing on sound quality. When all is said and done, the proximity effect is a trade-off for greater microphone directionality.

Just by having an awareness of proximity effect and how it sounds, you'll be able to identify it and choose to use it to your advantage or avoid it entirely.