The members of L.A-based, alternative R&B collective Xella join Headliner for a chat about the band’s chemistry, the genres and artists that have inspired their sound, and their recent QSC TouchMix-30 Pro live sessions performance.

What’s been keeping you guys busy on the music side?

Michelle Villegas (lead vocals): We took a little break from shows recently to finish our upcoming EP, so we just finished recording that and we're now working on the visuals and the release, which is super exciting. Basically all the behind the scenes stuff!

Can you tell us about your musical origins and the influences behind the band’s sound?

Villegas: I grew up with instruments in the house. My dad played music and always asked me to sing and so that was just a norm growing up. I finally took a chance on it by myself when I was about 16, jamming around with friends and then I guess it became what it is today with Xella – still jamming with my friends! We’ve just always used it as a safe space to express ourselves.

Wynette Manacsa (guitar/backup vocals): My dad is a drummer, and we always had a guitar laying around. It just kind of went from there, listening to all the oldies that he listened to, and then getting into hip-hop and pop punk growing up. I think a lot of our music influence comes from different places individually, so artists like Amy Winehouse and Erykah Badu. But like I said, it did come from a lot of the music that we listened to growing up as well.

We started off jamming in our friend's garage back in 2012 – we've been longtime friends throughout the years. There was a mutual friend's party that we all went to, and we kind of just reconnected again and started jamming together. Eventually it just clicked for us where we were like, ‘hey, why don't we start a band’, and everyone was super down. We've been together for a little bit over three years now.

Could you describe the chemistry between the members of the band?

Andru Bautista (guitar): I think our individual upbringings and talents do obviously have to be considered, and I think we mould them in a way that does complement each other. Some of us have leaned into different genres; I grew up on hip-hop, similarly to Wynette. Some of us listen to punk or metal. Meanwhile our bass player Carlos Elias, who joined last summer, has a big jazz influence.

Villegas: We're all puzzle pieces, so where one is maybe lacking a little bit, someone could give advice, and we do that very well discussing as friends. If somebody is stumped on a fill or the way to sing something, we're very open to talking to each other about it, and I think that's very important in our chemistry.

As a new band, how were you guys affected by the pandemic initially?

Manacsa: We started the band in 2019 and it felt really good. We were on a roll and we had a few shows lined up. Everyone was saying ‘2020 vision’ – it was like the phrase of the year. Everyone was really excited and in their creative bag, so we tried to keep that momentum going.

Right when we were recording Hardway in the studio in March, the pandemic hit, but we ended up still recording that song. Instead of having a single release party, we ended up doing a virtual release party on Zoom – everyone had their own setups from their own homes, so we just played a DJ set and released the song that way.

At the same time, we were simultaneously going through a member change, and just being able to go through something difficult like that together made us stronger collectively. 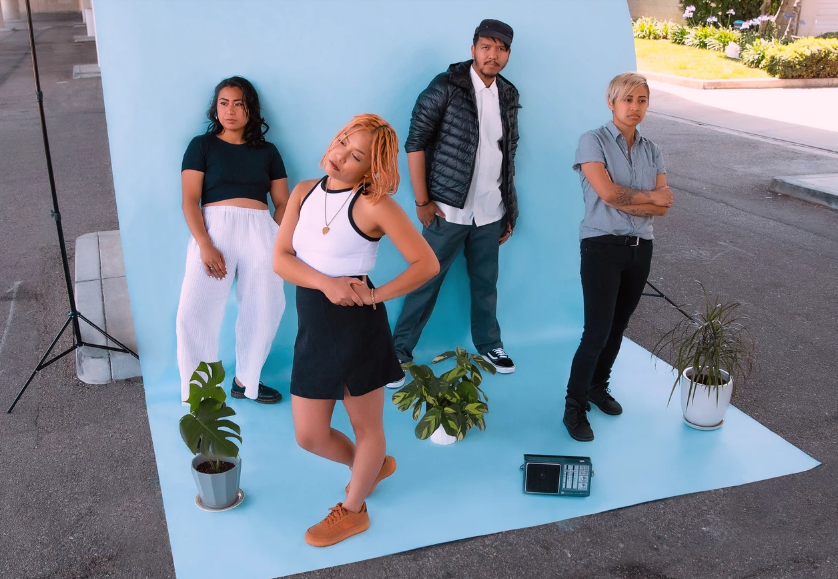 Can you describe your usual songwriting and production process?

Villegas: I think it can be different every time. Sometimes it simply starts with an idea, or sometimes it's based on just a chord someone's playing, and it makes me feel a certain way or feel a certain emotion, and then I start singing. It definitely comes from our jamming background I think as well – that's a big part of our writing process, especially the part where we make 50 different versions of every song until we settle on one version that captures all of those other versions! It’s amazing to see songs evolve the way they do sometimes.

Manacsa: Once in a while it'll be a few guitar chords, and other times somebody will come up with a demo. Everyone has their hands in production, and that definitely helps when we bring it to the studio. It changes every time we meet up!

What’s in the pipeline that you guys are looking forward to most?

Villegas: We are planning our EP for a release soon, so we'll have a big party for that one. Once that’s out, we definitely want to do a string of shows to help get that out into the world – possibly a tour of the West Coast.

Kiwi Champagne is one of the songs on there. That one tells the beginning of the story on the EP, explaining the heartbreak that happened from being cheated on by someone. As you go through the EP, every song is centred around the emotion of healing from that, and just letting it go in the end. Dream Girl is another single off the EP, and that one is more about the journey of how you're realising that the self love should be going to you instead.

Can you tell us about your recent live session performance using QSC’s TouchMix-30 Pro mixer?

Tiffany Perez (drums): We love QSC products. Recently they invited us to do a TouchMix live session performance and we chose to do our song Dream Girl. Blowhole Productions were doing the mixing for us, and it was a very fun process of how they created the whole set. The sound from the video was just wonderful – the audio was pristine. We definitely want to do more videos and projects with QSC, because we just love the sound of their monitors and the mixer.

Villegas: Because the TouchMix is so small, we can take it with us anywhere. It’s very portable, and the results of using it in this instance were just so good.

We love when our music creates this feeling where it just makes you want to body roll! That's a little joke we have…but that's something we try to accomplish in every song. We just can't wait for everyone to get to know us more. I think the QSC TouchMix session is a really good showcase of our range, and a nice taste of what we have in store. And we have lots of visuals on the way!

You can listen to the full interview with Xella on Headliner Radio, here: